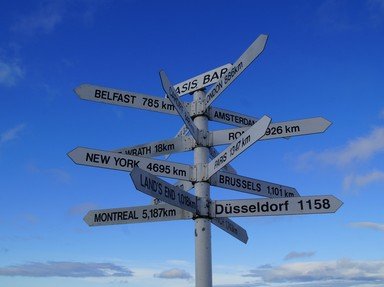 The Old and the New: United States Quiz

When settlers decide to build a home in a new place, they sometimes just take an old name and make it "New". Can you guess what names have been reused in the United States?

Quiz Answer Key and Fun Facts
1. The Old: The capital of the Netherlands, famous for its Red Light District. The New: A Dutch settlement on the eastern seaboard founded in 1625 to protect the fur trade on the Hudson River. By 1673, after multiple conflicts, the English gained control of the city and renamed it to its modern name. What name did the Dutch reuse?

New York would come later under English rule. When England originally obtained New Amsterdam, King Charles II granted the land to his brother, the Duke of York, who would eventually be King James II. The Dutch temporarily took the city back in 1673 during the Third Anglo-Dutch War, but with the Treaty of Westminster the English gained the city back until the American Revolution.
2. The Old: The capital of the Loiret department and Centre region in France. In 1429, it marked the first major victory for Joan of Arc over the English in the Hundred Years' War. The New: The largest city in Louisiana, and the site of one of the worst natural and engineering catastrophes in American history when Hurricane Katrina flooded the city in 2005. What name did the French reuse?

New Orleans was officially named after Philippe d'Orléans, Duke of Orléans, but naturally his name came from the city of Orléans. It was founded in 1718, and temporarily came under Spanish control with the Treaty of Fontainebleau. With Napoleon's rise, the city came back under French control, but was sold as part of the Louisiana Purchase just two years later.

In wartime, the English should learn to stay away from the name "Orleans." The Siege of Orléans proved a major victory for Joan of Arc in the Hundred Years' War in 1429, and the Battle of New Orleans proved a major American victory in the already-over War of 1812 (the Treaty of Ghent had been signed 12 days before the battle).
3. The Old: An ancient Greek city located in present-day Turkey inside the city of Izmir. Alexander the Great himself formulated the plan to rebuild it after the Lydians sacked the city hundreds of years earlier, and a fire in 1922 destroyed most of the area. The New: Founded in 1768 in Florida by Andrew Turnbull, it added "Beach" to its name in 1947 and attracts over a million visitors each year to enjoy the locale. Be careful though, as it is the shark attack capital of the world! What name did Turnbull reuse?

In 2007, the University of Florida studied what areas of the world have the most shark attacks. They found that New Smyrna Beach claimed the most confirmed shark bites, and then the next year there were 24 attacks for the year. In fact, UF ichthyologist George Burgess was once quoted that "Most people who have swum in and around New Smyrna have been within ten feet of a shark in their lifetime." Swimmers around the location of the original Smyrna in Turkey shouldn't worry about that when swimming in the Mediterranean Sea, though, as "The Daily Telegraph" reported in 2008 that sharks were "functionally extinct" there.
4. The Old: A European country comprising over half of the total land area of the United Kingdom. It survived as an independent kingdom from 927 to 1707 until it joined with a nearby kingdom to create the UK. The New: A section of the northeastern United States consisting of Connecticut, Rhode Island, Massachusetts, Vermont, New Hampshire, and Maine. It was settled by colonists in 1620 who named it after their mother country. What "new" name did the colonists use?

For a short time, New England was its own entity in the Dominion of New England in America. King James II put it together, and it was comprised of Massachusetts Bay, Plymouth, New Hampshire, Maine, Narraganset Country, and eventually Rhode Island, Connecticut, New York, East Jersey, and West Jersey.

It was established in 1686 as a defensive posture against France and Native Americans, but failed on multiple fronts. Colonists fought the rulings attempting to end smuggling as it was so commonplace, but they didn't have to for long.

In 1689, King James II was overthrown in the Glorious Revolution, and the Dominion disbanded.
5. The Old: A city in eastern England that is the historic county town of a county with the same name. Starting in 1660, John Bunyan, author of "The Pilgrim's Progress," was imprisoned there (his hometown) for twelve years. The New: Purchased from the Wampanoag tribe in 1652, it got its current name in 1787. In 1838, Frederick Douglass moved there and post-Civil War many members of the 54th Massachusetts Regiment (highlighted in the movie "Glory") settled there. What name did the Bay Staters reuse?

It starting dropping after that point, and the 1970 census would be the last time New Bedford passed the 100,000 mark. In 2010, the city had just over 90,000 residents, and was trying to recover from legislation that prevented over-fishing in the area, one of the main industries of the city.
6. The Old: One of the most populous North American countries, with a capital of the same name and bordered by a gulf of the same name. The New: A state that borders its name's origin, most of which was ceded to the United States in the Treaty of Guadalupe Hidalgo, although the southern portions were acquired in the Gadsden Purchase. What "new" state was the forty-seventh admitted to the United States?

Under Mexican control in the early 19th century, New Mexico had little development. With threats coming from the United States, however, the population began to rise and by the time of the Mexican-American War had reached over 50,000 people. After it became a United States territory, the population ballooned to well over 100,000 by 1880.

In 1861 it was almost made a state, but it was postponed by a significant majority. It was finally admitted on January 6, 1912, just 39 days before Arizona was admitted, completing the continental United States.
7. The Old: A city on the west coast of France constantly used by French enemies: the English, Huguenots, and the Nazis. It has served for filming areas for the movies "Das Boot" and "Raiders of the Lost Ark". The New: A city in southeastern New York settled by the same Huguenots who lived in the inspiration for the name that is one of the largest in the state. It was a large part of the movie "Catch Me if You Can". What reused name is attracted to the silver screen?

In World War II, La Rochelle was the last French city to be freed from Nazi forces. Germany held out for nearly eight months before allowing Allied troops into the city in May 1945. The naval base the Nazis set up in La Rochelle was used for both "Das Boot" and "Raiders of the Lost Ark" (the latter just for U-boat scenes).

New Rochelle has also had a rich history of movies being shot in and about it. Movies shot in New Rochelle include "Goodfellas," "Michael Clayton," and "Burn After Reading." "Catch Me if You Can" was all about Frank Abagnale, and one of the earliest scenes of the movie shows Frank's father (played by Christopher Walken) receiving a lifetime achievement award from the New Rochelle Rotary Club.
8. The Old: An island just off of the northern French coast that is actually a British Crown Dependency. It is the only inhabited island of its bailiwick, and it is not officially part of the European Union. The New: An eastern state named when King Charles II gave its origin's governor a grant in the colonies. Despite only having two professional sports teams in the major four sports, it houses two football teams from a neighboring state. What "new" state is this that borders another "new" state?

During the English Civil War, King Charles II left England to live elsewhere for his own safety. This included going to Jersey, where Governor George Carteret proclaimed him the King of England after Charles I was executed. After he won the war, Charles II never forgot the gesture, and after granting New York to his brother, gave Carteret the land that he would name New Jersey.

His relative Philip Carteret then became governor of New Jersey somewhat against the wishes of those already living there.
9. The Old: A city in central Germany on the Oker River with a population of nearly a quarter million in 2010. It was the capital of a duchy and free state of the same name until 1946, when it became part of Lower Saxony, and later Germany. The New: Originally called Prigmore's Swamp, citizens renamed the city after its namesake in 1714 while it was a powerful city in Europe. It is known now as the home of Rutgers University, originally named Queen's College. What is the name of this "new" city inside a "new" state?

In 1714, the city of Inian's Ferry (changed from Prigmore's Swamp in 1697) decided that they didn't do a very good job on choosing a name twice. Their third choice was to name the city after the capital of the Duchy of Brunswick, Braunschweig in German. Later that same year, the House of Hanover took over the British crown headed by King George I, son of the Duke of Brunswick-Lüneburg.
10. The Old: A county on the southern coast of England, and home to a port at the aptly-named Portsmouth, where both the "Mayflower" and "Titanic" were once moored. It served as the birthplace of the Royal Navy, British Army, and Royal Air Force. The New: A state in the northeastern United States that was the first to declare its independence from Britain. John Mason, a former captain at the original Portsmouth, named a city on its southeastern coast Portsmouth as well, though today Concord serves as its capital. What name was used for both coastal areas? 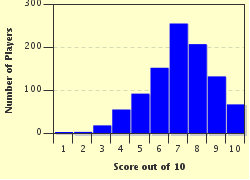 
Other Destinations
Explore Other Quizzes by illiniman14