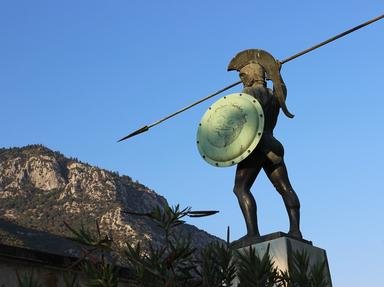 This is a quiz about Spartan armor and weapons. See what you know and learn what you don't. Good luck and may the Spartans be with you.

Share on Facebook
Share on Twitter
Share by E-Mail
Author
lakedaemonian
Time
4 mins
Type
Multiple Choice
Quiz #
271,128
Updated
Dec 03 21
# Qns
20
Difficulty
Tough
Avg Score
12 / 20
Plays
1030
Awards
Top 20% Quiz
This quiz has 2 formats: you can play it as a or as shown below.
Scroll down to the bottom for the answer key.

Quiz Answer Key and Fun Facts
1. What is the ancient Greek name for the Spartan shortsword?

The Spartan shortsword was made for close quarters fighting (they would use them when their Spear broke or the phalanx broke formation) and therefore was very short compared to other Greek swords. The rest of the world found the tiny Spartan swords to be inferior. They did not know however, with what deadly precision these warriors used them.
2. How long was the Spartan shortsword?

The Spartan xiphos was highly effective in close-quarters combat. Ultimatley, when shield to shield with your enemy and a hair's breadth away from your neighbor, the more maneuverable your sword, the better.
3. What was the total length of the Spartan spear?

The Spartans called their spears "eight footers."
4. Of what material was the Spartan spearhead made?

During the Bronze Age, bronze was the main material used in weapons. However, due to advancements later on, Greeks discovered that iron was a stronger and longer lasting metal.
5. What did the uniform letter all Spartans bore on their shields stand for?

The Spartans wore the only uniform military in Hellas (ancient Greece). They all wore the same armor and carried the same shield. Upon the shield was the painted letter lambda. This Greek L stood for Lakedaemon, the region of Sparta. Lakedaemon was also a god, the son of Zeus and a nymph, Tygete.

He was said to be the founder of this ancient city. We also derive the name of the mountain range of Sparta, Taygetos, from this immortal's mother.
6. What did the Spartans wear on their feet during battle?

The Spartans considered footwear for soldiers 'soft'. Already when a Spartan youth trained he wore nothing because it was believed that he would be more hardened for battle if he did not know the comfort of soft leather on his feet. (In films, however, Spartan soldiers are generally shown with sandals. Getting large numbers of actors to walk barefoot over rough ground is not practical).
7. Of what two materials was the Spartan shield made of?

The bulk of the shield was composed of oak and was covered by a thinner layer of bronze. The total width of the shield was three feet and provided prtection for its bearer's whole body and a third of the man's to his right.
8. What did the grip of a Spartan shield look like?


Answer: There was a forearm strap in the middle and a hand grip to its right.

This grip was called the Argive grip. It came into use around the eigth or seventh century B.C. It made the Greek soldier much more maneuverable and stable.
9. What is the ancient Greek name for the Spartan shield?

Aspis literally means "tool of war." This name should not be confused with the species of snake that bears the same appellation.
10. What color was the crest of the Spartan helmet?

The crest was thought to give a soldier more height, therefore making him more frightening.
11. What type of crest did a Spartan platoon commander wear? (Kings also wore them).

Spartan platoon commanders commanded 32 men. Therefore, in order in to see who was giving orders, some distinction was needed to tell between the leader and others.
12. What was the only vulnerable part of a hoplite's face with his helmet on?

The hoplite was nearly invulnerable on the head, since a 2x1 hole at the eyes was the only opening in the helmet.
13. Of what material was the helmet made?

The material of choice for all hoplite helmets was bronze. The helmet had a thickness of about 1/16 of an inch. It provided protection for nearly the whole face and head but also restricted hearing and sight. The latter however, is not of the utmost importance considering that the hoplite fought the man directly in front of him.

He was almost never surrounded unless the phalanx broke formation. Even then the enemy would not encircle, but rather press on forward.
14. What part of the body did the greaves cover?


Answer: The shin, knee, and ankles.

Greaves were vital since the shield only covered down to the thighs. They too were made of bronze.
15. What part of the body did the bracers cover?

Bracers were needed to protect the soldier's arm when he reached out to thrust at an enemy.
16. What was different about the Spartan body armor than that of other Greeks?


Answer: They wore a bronze cuirass as opposed to the typical lamellar armor.

The cuirass was designed to resemble a very muscular upper body. It had two pectorials at the top and abdominal muscles that covered the area from the abs to the obliques. Lamellar, on the other hand, was made up of multiple layers of linen, leather, and bronze.

The bronze however, was very thin. Lamellar armor did not provide quite as much protection as the bronze cuirass did. Nonetheless, it would still protect extremely well from an enemy weapon.
17. How was the cuirass worn?


Answer: It was buckled at the sides and shoulders.

The cuirass was buckled at the sides and shoulders to make it easy for a soldier to slip into. Lamellar, worn by most other Greeks, had two leather shoulder straps that connected to the main body armor.
18. What was the purpose of the red cloak?


Answer: They wore it so their enemies would never see them bleed.

This was put in to place by Lykurgus, Sparta's strict lawmaker. The Spartans believed in showing no pain because it was is a sign of weakness and vulnerability. The same went for bleeding.
19. How was the cloak worn?

It was worn this way so that everything possible could be covered. However, seeing as the Spartan soldier had to be agile with his weapon there could be no cloak getting in the way of his right hand. Therefore, only the right side showed.
20. What did the Spartans wear under their cuirass?

The tunic was the everyday clothing for a Greek male. The Spartans would have also worn their cloaks in everday life. Women wore peplos.
Source: Author lakedaemonian


Other Destinations
Explore Other Quizzes by lakedaemonian