Tales of the Behistun Inscription Quiz

History students commonly learn that the Behistun Inscription aided in the decoding of cuneiform. However, what else is known about this amazing artifact? Let's see what you know!

Quiz Answer Key and Fun Facts
1. Cuneiform is the oldest known form of writing. Which civilization in ancient Mesopotamia was first to use cuneiform?

The Sumerians, needing a way to record temple business, developed picture writing in order to keep accurate records. Eventually their writing was revised to portray more abstract ideas; meaning "wedge-shaped", cuneiform writing was developed by the ancient Sumerians in approximately 3500 BC. Considered the oldest known system of writing, it was written with a wedge-shaped stylus which was used to make wedge-like impressions in clay. Cuneiform symbols were phonograms, which represented syllables. All of the subsequent civilizations in ancient Mesopotamia used some sort of cuneiform writing to represent their own language.

Its use was discontinued sometime after 100 BC, when alphabetic script was adopted.
2. Which of the following languages was found on the Behistun Inscription?

As it was adopted by successive cultures in ancient Mesopotamia, is was altered so that there were many different forms of the script. All of the languages found on the Behistun Inscription were written in forms of cuneiform; the Behistun Inscription was in Old Persian, Elamite, and Babylonian, which was a later form of written Akkadian writing that was adopted when the Akkadians conquered Sumer.

The Akkadians adapted the Sumerian cuneiform to their own language, which guaranteed the continued recording of history in the land between the rivers.

It is estimated that somewhere between 500,000 and two million cuneiform tablets have been found in modern times; only 30,000-100,000 have been read or published.
3. Which great Persian king was the author of the Behistun Inscription?

Darius I, or Darius the Great, was a distant cousin of Cambyses who won approval of the Persian army and was declared king in 522 BC. Darius is well-known for the successful administration of a great empire; he divided the empire into satrapies, that were under the control of the local satrap, or governor. With a network of spies, known as his "eyes and ears", he was able to maintain a government with uniform laws and policies. People who joined the empire, even those who were conquered, were allowed to keep their customs as long as they paid taxes and remained peaceful.

In 490 BC Darius made his one mistake: he attempted to conquer those independent Greeks and was soundly defeated at the Battle of Marathon.
4. One of the figures carved near the top of the Behistun Inscription is connected with Zoroastrianism, which was the state religion of the Persian Empire. What spirit is considered to be their highest spirit of religion?

The Behistun Inscription plainly states that the king was successful due to the "grace of Ahura Mazda". One of the best known symbols of Zoroastrianism is the "fravahr", which appears at the top of the Behistun Inscription. Representing the idea of a guardian angel, the fravahr might have also been symbolic of the power of the king as well as Ahura Mazda, the highest spirit of religion. Zoroastrianism came into practice sometime around 600 BC, and believed in the force of truth and light, which was Ahura Mazda, and the force of evil, called Ahriman. Each individual had the right to choose which force to follow, however, only the followers of Ahura Mazda would find eternal happiness in the afterlife. Known as an "ethical religion" because of the emphasis on righteous conduct, Zoroastrianism had a tremendous impact on the way the Persian empire was ruled; righteous conduct was required of all, even the king!
5. The Behistun Inscription appears to be in a rather remote area. Why would the ancient Persians decide to display it in this place?


Answer: It was on the road between the capitals of Babylon and Ecbatana.

One of the great Persian contributions to civilization was the building of roads that united the empire. Roads not only made it easier to move troops in time of danger, but also promoted trade. The most famous of the roads was called the Royal Road; it is believed that the road began in present-day Turkey, and continued through the old Assyrian capital of Nineveh, before going south to Babylon. Near Babylon the road then split in two, and one of the routes went north to Ecbatana, while the other route went on to Susa and Persepolis.

There were four ancient capitals of Persia; Susa was the first and eventually became the winter capital after the grand city of Persepolis was built. Other capital cities included Pasargadae, where Cyrus the Great, founder of the Persian Empire was buried, and Ecbantana, which had been the capital of the captured Median Empire.
6. Which language on the Behistun Inscription was the key to the decipherment of cuneiform?

The Old Persian cuneiform was deciphered first. Translators found that it was more alphabetic in nature, and there was a slanted line that separated each word, making it easier to read. In addition, Old Persian cuneiform changed into Middle Persian, and then again into modern Persian, which is still used today; it is also related to the Avestan language, which is used in the Zoroastrian book, the "Avesta".
7. Several people worked at translating the Behistun Inscription. However, which of the following listed was an Englishman who became interested in the Inscription after being assigned to the forces of the Shah of Iran in 1853?

Carsten Niebuhr, a German surveyor, visited the site in 1764, and subsequently published an account of his journeys which included a copy of the Inscription in 1778. By 1802, Georg Friedrich Grotefend had concluded that Old Persian was more of an alphabetic script and that each word had a slant after it, in addition to deciphering ten of the thirty-seven symbols. Being assigned to help reorganize the Shah's army gave Rawlinson access to rather remote locations.


Answer: Accounts of revolts that were suppressed.

While saying that the Inscription bears accounts of revolts that were suppressed might be oversimplifying matters a bit, that is really what is says! The information is contained in five columns of each language, and each column tells about different revolts that occurred.

After a conclusion appears to have been reached with a summary and the obligatory warnings and curses, even more details of rebellions were included. Every great king wants to make a record of how great he actually was, and the record is given in exquisite detail! For example Line 16 of Column 1 says, "After I had slain Gaumâta, the Magian, a certain man named Âssina, the son of Upadarma, raised a rebellion in Elam, and he spoke thus unto the people of Elam: 'I am king in Elam.' Thereupon the people of Elam became rebellious, and they went over unto that Âssina: he became king in Elam. And a certain Babylonian named Nidintu-Bęl, the son of Kîn-Zęr, raised a rebellion in Babylon: he lied to the people, saying: 'I am Nebuchadnezzar, the son of Nabonidus.' Then did all the province of Babylonia go over to Nidintu-Bęl, and Babylonia rose in rebellion.

He seized on the kingdom of Babylonia (3 October 522 BC)". It truly appears as if no details were omitted!
9. Which ancient historian, called the "Father of History", inadvertently aided in the decipherment of the Behistun Inscription?

Herodotus traveled widely through the ancient world, gathering information which he eventually included in a great book. He wrote about topics such as Egyptian pyramids, the walls of New Babylonia, and, luckily, Persian kings. He loved to tell a good story, and for some reason, future scholars were not certain if he wrote reliable information about everything he saw.

For example, he wrote that the walls of New Babylonia were so thick that people actually lived on top of them. In fact, he said they were so wide that there was room for two rows of houses separated by a space one could use to drive and turn a chariot around.

It was assumed that he was exaggerating a bit until the walls were actually uncovered in 1899. It is always beneficial to find information that proves Herodotus was actually correct and was not a spin doctor! His list of the ancient Persian kings was in the same order as the list on the Inscription; Old Persian was deciphered by matching the names and characters.
10. To which country would one travel today to see the Behistun Inscription?

Located in the northwest province of Kermanshah in Iran, the Behistun Inscription is part of an area called The Behistun Historical Site. Sixteen historic monuments are located at the site, which covers 116 hectares. It is possible to book a tour or take a virtual tour of the area, which has been a UNESCO World Heritage Site since 2006.
Source: Author ponycargirl 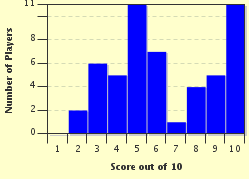 Related Quizzes
This quiz is part of series The Tales Series:

Even inanimate objects have a story to tell! Play a few of these quizzes, and I think you will see what I mean!