Many women have accomplished great things, but may times they are overshadowed by their male counterparts. This quiz involves only ten of them. Enjoy!

Quiz Answer Key and Fun Facts
1. Her accomplishment was to be the first woman to fly solo over the Atlantic Ocean. Who was she?

Amelia Earhart did this the 1920s. Later, in 1937, while attempting flying across the Pacific Ocean in an attempt to circumnavigate the world, she mysteriously disappeared. Although it is widely accepted that her plane fell, there is also a conspiracy theory about her being a U.S. spy.
2. Her accomplishment was to be the sole woman in the 20th century to earn two Nobel Prizes in different fields. Who was she?

The two Nobels Marie Curie earned were in Physics and Chemistry. Marie Curie was the main factor behind the discovery of the chemical elements radium and polonium, with the latter being named after her native country, Poland, which was under Russian occupation at the time of her childhood.
3. Margaret Thatcher was the first woman Prime Minister of the United Kingdom, being elected for the first time in 1979. Of which political party was she the leader?

Margaret Thatcher served as Prime Minister of the UK for most of the 1980s. During her tenure, Britain was victorious in the Falklands War, a dispute between the UK and Argentina over the Falkland islands. She also established friendly ties with Mikhail Gorbachev, the last leader of the Soviet Union.
4. Hatshepsut was the first woman to reign as Pharaoh of Egypt and she belonged to the Eighteenth Dynasty. What does her name mean?

Egyptologist James H. Breasted has described Hatshepsut as "the first great woman in history of whom we are informed." She was the daughter of Thutmose I and his wife, Ahmes. She married Thutmose II and mothered Thutmose III, with her reign beginning from after the death of her husband to the coming-of-age of her son.
5. Speaking of women Prime Ministers, let's turn to India. This female Prime Minister's name was Indira Gandhi. But was she the daughter of Mahatma Gandhi, whose passive resistance paved the way for India's independence from Britain?

Indira Gandhi was the daughter of Jawaharlal Nehru, the first Prime Minister of India. She was first elected in 1966, two years after her father's death. In 1984, she was assassinated by two of her bodyguards, Satwant and Beant Singh.
6. Okay, one more question on women Prime Ministers. Golda Meir was the first woman to lead which nation?

One of the most important events of Golda Meir's tenure was the Yom Kippur War of 1973, when Israel defeated a coalition of Arab states, mainly Egypt and Syria. The war lasted from October 6 to October 25, 1973 and took its name from the Jewish festival of Yom Kippur.
7. It is said that we should never hit a woman with anything, even flowers. However, this did not apply to Mary Surratt, the first woman to be executed in the US. What was her crime?


Answer: Being one of the Lincoln conspirators

There was no such thing as an abduction of U.S. Grant. Mary Surratt was indeed one of the Lincoln conspirators, with her boarding house being a place where the gang met, and she was executed on July 7, 1865. Her son was tried and but not executed for his part at the plot.
8. The first and only woman to compete and win at the Ancient Olympic Games was Cynisca. From which Greek city state did she hail?

Our main information about Cynisca's deeds is Xenophon. He says that she was encouraged to breed horses for chariot racing by her brother, Agesilaus II of Sparta, in an effort to discredit the sport of chariot racing. Cynisca's team took part in the Olympic Games of 396 and 392 BC and won both times, but she was not allowed to witness her victories, because of a law that forbade women from entering Olympia at the time of the Games.

Her win encouraged many wealthy Spartans to train and breed horses for the sport of chariot racing.

A bronze statue of a chariot with horses, a charioteer and her was erected at the Temple of Zeus in Olympia.
9. In a quiz on women firsts, we cannot neglect the very first woman on Earth. Needless to say, she is Eve. In which biblical book can we find more about her?

Eve was created by the Lord from Adam's rib. Saint Thomas Aquinas used that fact as a proof that men and women were created to be equal, in the sense that they were created by the same God and thus women are not the slaves of men. However, Aquinas agrees with Aristotle that women are naturally subject to men, an almost universal theory at the Middle Ages. Eve was tempted by Satan, in the guise of a serpent, to eat from the Tree of Knowledge of Good and Evil.

She also persuaded Adam to eat from it. Since the Lord had ordered them not to eat from it and they failed to resist the temptation, they were banished from the Garden of Eden.
10. That woman had the distinction to be the first person Jesus Christ spoke to after His resurrection. Needless to say, she is Mary Magdalene, as told in the Gospels of John and Mark. What did He first say to her (as told in the KJV)?


Answer: Woman, why weepest thou?

Mary Magdalene told the Disciples of Jesus Christ's resurrection, but initially they did not believe her. The disciple Thomas said that he would believe that Jesus Christ was risen if he saw the scars the nails had left on His hands and feet. And this was the origin of the saying "Doubting Thomas".
Source: Author DeepHistory 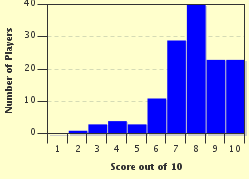 Related Quizzes
This quiz is part of series People!:

Is there a need for an introduction?


1. The Good, the Bad and the Crooked Average
2. Life and Career of a Legend Average
3. Ten Residents of the Appartamento Pontificio Average
4. Leonard Cohen's Masterpieces Average
5. Women Firsts Through the Ages Easier