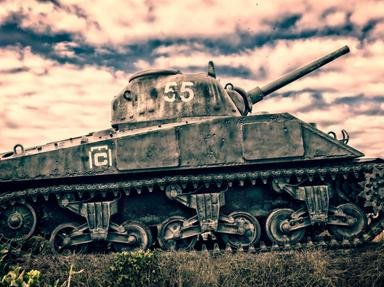 Here is a quiz about some of the more famous weapons of World War II. Hopefully you will learn some new things about the weapons soldiers fought with in places like Stalingrad, Normandy, the Ardennes, Iwo Jima, and Okinawa.

The MG34, though quite outstanding, was expensive to produce and as the war took its toll on national resources the MG42 came about as Germany's answer to the need for a simpler, mass-production machine gun. The emphasis was put on pressed-steel parts (like the MP40 sub-machine gun) rather than the highly engineered and machined construction of the MG34.

What emerged from the design shops was a remarkable weapon. Far from a cheap cousin to the '34, the MG42 became the weapon of choice for frontline troops.

Equally as reliable as its partner, this machine gun also possessed an astounding rate of fire. Nearly three times as fast as any other machine gun on the battlefield, the sound it made was something akin to a chain saw.
2. What grenade was known as the potato masher?

The famous German 'potato masher' grenade featured its charge within a canister on the end of a stick. Rather than using the fragmentation of the body of the grenade to cause damage, the stick grenade used an increased charge of TNT explosive. The grenade was ignited by unscrewing the end cap and pulling a friction cord which started a four- to five-second fuse.

The stick design enabled the grenade to be thrown over a greater distance than a standard egg-shaped charge. Sometimes fragmentation rings were added over the charge canister to increase the anti-personnel effect and a further version existed where multiple canisters were grouped around one stick. This version was largely used as an anti-tank or bunker-busting charge.
3. What rifle made a distinctive "ping" sound when the last round was ejected?

Designated as the 'Rifle Calibre .30 M1' the Garand took its common name from its designer John C Garand in 1932. If you've ever seen a Spielberg war film or TV series based on American soldiers you can guarantee that you've seen one of these. They were one of the first gas-operated, semi-automatic infantry rifles to be widely used.

Built with a heavy, wooden stock, which covered most of the metal parts, the Garand is weighty, but the high standard of manufacture made it reliable. Some nations, such as the British, thought that semi-automatic rifles would cause their soldiers to use excessive ammunition, but US units could rapidly gain fire superiority with this weapon.

War-movie and computer-game buffs would also recognise the "ker-ching" sound which loudly retorts after the last round is fired. The internal magazine was loaded by shoving down eight rounds, held within a retained clip. Once the complete magazine was used, the clip extracted itself. The M1 Garand was a powerful and sturdy personal weapon.
4. What submachine gun had the highest rate of fire?

This weapon had its origins in the PPD1934, which itself was a version of the German MP18. The difference was that the PPSH-41 was specifically designed for mass production, though the wooden stock (rather than a metal alternative) was retained.

Following the German invasion of Russia, the sub-machine gun was rushed into production and by 1942 it was being issued widely. Often seen in posed propaganda photographs, the distinctive drum-loaded PPSH-41 held a huge supply of ammunition and delivered it with a rapid rate of fire. It was easily as competent as the German MP40 and certainly better than the British Sten.
5. What gun was adapted as an anti-tank gun from its original role as an anti-aircraft gun?

The so-called 88 is probably the most revered artillery piece of World War II. Starting life as an anti-aircraft gun in 1933 (designated the Flak 18), the 88 proved both extremely accurate and highly versatile. Tried during the Spanish Civil War, it was soon discovered that the powerful 88 could be used as an effective anti-tank weapon by firing it on a flat line-of-sight trajectory. Rommel's Africa Corps put this into effect with devastating results against the Allies in the North African campaign.

The high power and long range meant the 88 could be deadly at distances four times longer than Allied tanks could reach. With the 88 and an experienced crew firing up to 20 rounds a minute, the Allied tanks needed to cover a lot of hostile ground before they reached a range from which they could retaliate.

The artillery piece was mounted on a cruciform platform, which enabled the gun to be turned 360 degrees and featured a maximum 90 degree elevation. The gun was normally towed behind a half-track vehicle, which also carried the gun crew and ammunition. The 88 was such a powerful weapon that it was also mounted into armour such as the Panzer VI Tiger heavy tank. The effectiveness of this combination achieved legendary status from Russia to Normandy.
6. What was the most feared German tank of the war?

In 1941 Hitler ordered the creation of a super-heavy tank for use in the deserts of North Africa and on the Eastern Front. The main remit was to produce a weapon that was capable of penetrating 100mm of armour at 1,500 metres, while also having enough protection to withstand a similar attack on itself. By 1942 the massive Panzer VI Tiger heavy tank was rolling off the production lines, exceptionally heavily armoured and equipped with the outstanding 88mm cannon.

Wide tracks and sets of interlocking road wheels, all powered by an eight-speed Maybach engine, meant that the Tiger was a go-anywhere machine. It's greatest successes were in open country, such as the Russian plains or the Tunisian desert, where it could roam almost without fear of meeting equal opposition.

The large tank suffered somewhat in built-up areas, where its potential could not be fully realised. Hydraulic systems and power steering were pioneered with the Tiger and in many ways it was the perfect heavy tank of its time. Manufacturer Henschel produced over 1,300 Tigers, before they were replaced by the even bigger Tiger II in late 1944. However, the Tiger II was never widely faced, and so almost all Allied tank crews were more fearful of the Tiger I. Allied tank crews tell of six shots from Shermans bouncing off of a Tiger's armor, and so the tankers were understandably scared of the Tiger I.
7. What WWII truck was nicknamed the 'Deuce and a half'?

The GMC 6x6 was a huge success. Nicknamed the Jimmy or Deuce and a half this 2.5-tonne truck supplied troops from Britain, Russia, Canada and the US. With a powerful Hercules six-cylinder engine and high ground clearance, the Jimmy could manage just about anything.

First produced in 1939, this truck worked on all fronts and was especially useful when routes of supply were difficult to establish. A rag-top cab version featured a ring mount for a .50-calibre anti-aircraft machine gun. The standard format for the truck was a latticed-timber, canvas-topped cargo lorry. Steel-sided, canvas and hoops-bench models were used for troop transports.
8. What was one of only three jet fighters, besides the HE-162 and the Meteor, used in World War II?

The initial designs for a jet fighter were started as early as 1939, but delays in building a suitable power plant and wrangling over the proposed role of the aircraft between a fighter and a bomber kept any prototype from the skies. It wasn't until the end of 1943 that the first armed production Me 262 hit the air with an unprecedented noise. At about 100mph faster than a P51 Mustang, the fighter was unmatched.

Special units of the best fighter aces were drawn up for the new wonder weapon, and in the closing stages of the war Allied air commands were certainly worried, but there were never enough Me 262s to stem the Allies' air superiority. A preview of air power to come, this early jet also suffered because of its new technology. Units often went out of action due to accidents and mechanical failure.
9. What was the most widely used bomber in the European and Pacific Theaters?

The B24 was the bold cruising bomber of the skies. Named the Liberator, the B24 bristled with defensive weaponry to protect itself against fighters. The earliest models were pressed into action in the South Pacific campaign, but it wasn't long before the US 8th Army Air Force (based in Britain) started making the B24 a common sight over Europe.
10. What landing craft could drop troops off on any stretch of land?

Irish-American Andrew Higgins was a no-nonsense, tough businessman, who built boats for a living. For any major waterborne offensive (such as Italy, Normandy or the Pacific islands) the Allies faced the difficulty of needing deep-water harbours to dock their traditional troop ships.

Every major port was heavily defended and could be put out of action by the occupiers simply scuttling their own ships in situ. The answer was the Higgins Landing Craft Vehicles and Personnel, or LCVP (also often known as LCIs - Landing Craft Infantry, LCTs - Landing Craft Tank).

With this timber-built landing craft, it was possible to land on any stretch of open beach, drop off troops and equipment and withdraw to return to a mother ship and collect more. The ingenious design was used in every theatre of war.
Source: Author baller7194 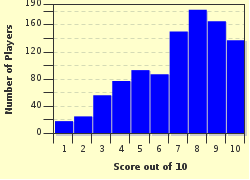 
Other Destinations
Explore Other Quizzes by baller7194