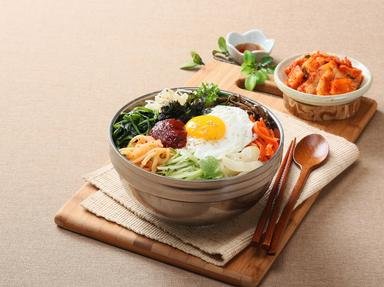 The Korean peninsula is home to a cuisine rich with various rice, vegetable, meat, and seafood dishes. We'll examine ten of these delectable dishes.

Quiz Answer Key and Fun Facts
1. One of the most famous and versatile in Korea, this dish of marinated slices of beef can be found in fine-dining restaurants, in mom-and-pop shops, at street markets, and even cooked at home. Internationally, it is served traditionally or used to spice up burgers, pizzas, and even tacos. Meaning "fire meat" in Korean, what is this popular dish?

Bulgogi has achieved international status as one of the most delicious Korean dishes. Typically made with sirloin or ribeye cuts of beef, the meat is marinated and then cooked, usually on a grill or fried in a pan. The name "fire meat" doesn't mean that it is a spicy food but that it is cooked over a fire. The meat itself is sweet and salty, combining two tastes into one incredible bite.

The other answer options are also Korean beef dishes: "galbi" is a Korean rib dish that has similarities to bulgogi, "yukhoe" is a raw beef dish similar to beef tartare, and "jangjorim" is braised beef set in a small bowl of soy sauce.
2. Bibimbap is a dish of rice topped with various sautéed vegetables, red pepper paste, and soy sauce and often topped with an egg. It is stirred immediately before eating. Vegetarian versions are popular with those that are looking for something tasty but lacking animal products (something difficult in Korean cuisine). It is often served in a "dolsot" (a hot stone pot) that continues to brown the rice as it is served. Which of these vegetables would be LEAST likely to be included in a bowl of bibimbap?

The list of vegetables that are included in bibimbap can be extensive, but they are usually limited to those popular in Korean cuisine. Some of these include the following: radish, bean sprouts, Korean zucchini, cucumber, mushrooms, spinach, carrots, bellflower root, among many others. While celery is widely available in South Korea, it is not typically served with bibimbap.
3. A Korean street food or one served in small diners, this dish made with small rice cakes can be incredibly spicy. It is also typically served with processed fish cake and hard-boiled eggs. For those on a budget, this dish is usually also quite cheap. What is it?

Tteokbokki isn't the healthiest dish that Korea has to offer, but it is certainly one that is convenient. Street vendors will most likely have the dish pre-cooked and ready to go when you walk up to them, allowing you to pay and move on in quick fashion. Some vendors have small ledges on their carts that allow you to eat your tteokbokki without having to walk, while others erect small tents with a table or two in which you can sit down for a short rest and have a drink with your food. For those who are really in a rush, some vendors sell the sauced rice cakes on a skewer, which is held with one hand.

The other answer options are also Korean street foods: "pajeon" is a Korean potato pancake made with green onions, "soondae" is a kind of blood sausage, and "mandu" are Korean dumplings (pot stickers).
4. Korean barbecue is an incredibly fun way to spend dinner with your Korean friends. Unlike in most Western restaurants, the meats are grilled right in the middle of the table. The meats, side dishes, and soups are shared amongst all members of the table, and you simply snatch up what you want to eat with your chopsticks or spoon. This pork belly dish, which would be cut up into smaller pieces before being eaten, is known as what?

Korean barbecue is becoming more internationally-acclaimed as the world comes to know more about Korean cuisine. Samgyeopsal is a familiar menu item in Korean barbecue restaurants, and if the location serves pork, it will most likely have some variation of pork belly on offer. The name "samgyeopsal" means "three-layer meat" because the fat and meat of the pork belly look as though they are layered. Some restaurants sell "ogyeopsal" or "five-layer meat", offering more layers for a higher price.

The other answer options include Korean pork dishes: "bossam" is steamed, sliced pork that is then wrapped in vegetable leaves and eaten, "jokbal" is steamed pig's feet that is thinly-sliced and dipped in a sauce or wrapped, and "duruchigi" is spicy stir-fried pork popular as a lunch item with office workers and taxi drivers.
5. Kimbap is a popular picnic food in Korea as it is easy to transport. It is often wrapped in foil or placed in plastic containers until it is ready to eat. Chopsticks are used to lift the kimbap to your mouth. In the center, various vegetables and meat are wrapped in a layer of rice and what other dried ingredient found on the outside?

Though lettuce, cabbage, and perilla leaves are common in Korean cuisine, kimbap is wrapped in dried, seasoned seaweed. The chef starts with a bamboo mat made of several bamboo sticks. The dried seaweed is then placed down and covered with rice. Pickled vegetables and processed meats, such as ham or crab, are popular ingredients to add to the center.

The whole thing is then rolled into its recognizable shape and sliced. Who's ready for a picnic?
6. Considered Pyongyang's greatest contribution to Korean cuisine, naengmyeon is a cold noodle soup served in restaurants. The soup is chilled so thoroughly that there is often slushed ice floating in the broth. Spicy mustard and vinegar are added to the dish after it has been served. Like Japanese soba, the noodles are made from what pseudocereal common in Asia?

Buckwheat was domesticated in Asia and is a common foodstuff used to make noodles and other products. While some naengmyeon noodles are made with other starches, including potato and sweet potato, buckwheat is by far the most common. The pseudocereal gives the noodles their distinctive brown color.

Few foods in South Korea are marketed with appeals to being authentic North Korean fare, but naengmyeon is different. It has a long history of being associated with the city of Pyongyang, and restaurants will often try to lure in customers by telling them that their naengmyeon is as good as that from their northern neighbors.
7. This Korean homestyle dish made with braised chicken and rich, spicy, and slightly sweet soy sauce is often eaten on special occasions. It is synonymous with the Korean city of Andong, where it became a popular dish to compete against the fried chicken shops popping up all over the country. Served with various vegetables and glass noodles, what is this savory, sweet, spicy chicken dish?

Jjimdak is often served with a pair of scissors so that one can cut through the glass noodles. Diners then use a set of tongs to move their desired ingredients to their own personal dishes to eat. The soy sauce served with jjimdak is incredibly rich, which gives the dish its own special appeal.

The other answer options are all Korean chicken dishes: "samgyetang" is a chilled Korean soup served with a whole chicken and eaten during warm months, "dak galbi" is a kind of stir-fried chicken dish popular with college students, and "yangnyeom chicken" is a kind of sauced fried chicken that has exploded in popularity over the last few decades. Korean fried chicken is so incredibly popular that Korean restaurant chains have begun to open up in other countries; however, a large portion of Korean people don't consider it authentic Korean food, instead seeing it as an import.
8. Korean stew, or "jjigae", is perfect for cold winter months or for simply sharing while dining out. There are many kinds of Korean stew, but this one in particular finds its roots in the aftermath of the Korean War, when food was scarce. Translating roughly to "army base stew", the origins of which of these dishes includes ingredients said to be scavenged from American military bases, some going so far as to dumpster dive for them?

Budae jjigae is still popular in restaurants that specialize in it, with versions in which you can customize the ingredients. Quite common are hot dogs, Spam, instant noodles, canned baked beans, and American cheese. Traditional Korean ingredients are often added, including kimchi, dumplings, scallions, mushrooms, rice cakes, and tofu. Few ingredients would be unwelcome in a pot of budae jjigae, for its very nature is to be a hodgepodge.

The other answer options are popular Korean stews: "kimchi jjigae" is kimchi stew, "doenjang jjigae" is soybean stew (a personal favorite of mine), and "dubu jjigae" is tofu stew.
9. The Korean royal court of the past often had specific dishes that they considered "royal dishes", and this famous dish made with glass noodles, meat, vegetables, soy sauce, and sesame oil was counted amongst them. What dish is it?

The preparation of japchae is sometimes considered a cumbersome process as there many ingredients, but it is usually worth it. It is often eaten during celebrations, and the Korean people love introducing it to their foreign friends. It can be served as "banchan" (a side dish) or prepared as an entrée itself. Have you made too much japchae for dinner? That's okay! Like spaghetti, some people think that japchae tastes better after a night in the refrigerator.

The other answer options are all Korean noodle dishes: "kalguksu" is a popular noodle soup made with a light broth, "jjapaguri" is a portmanteau of two popular brands of instant noodles in which expensive cuts of beef are often added and was popularized in the Oscar-winning film "Parasite", and sujebi is a noodle soup which includes special flat wheat noodles (resembling something more like a flat dumpling than a thin noodle).
10. The Korean dessert "patbingsu" is perhaps its most famous, made with shaved ice and various sweet toppings. Some of these include condensed milk, fruit chunks, jellies, and nut powders. But the star of the dish is which ingredient, uncommon in Western desserts?

Red bean is a popular dessert flavoring in East Asia, and "patbingsu" is perhaps the most famous example of utilizing it. Red bean paste is also a popular addition to tteok (Korean rice cakes) and "bungeo-ppang", a street pastry shaped like a fish that originated in Japan, but is very popular in Korea.
Source: Author trident

Related Quizzes
This quiz is part of series 10 Dishes:

Each of these quizzes takes a look at ten delicious dishes from countries around the world. Bon appetit!