The Church of England parish is the smallest unit of local government in England and has a parish church, whose registers are extremely useful in family history.

Quiz Answer Key and Fun Facts
1. What exactly is a Parish?


Answer: An area administered by a single priest

In country areas, a parish was often based on a village, but would contain outlying hamlets and farms as well. In towns and cities parishes tended to be smaller, and often there were several within a stone's throw of one another.
All of England consisted of parishes, except in a few unpopulated areas of moorland or forest, designated 'extra-parochial'.
2. The start of the Victorian era is usually taken as the basis for denoting the ancient parishes of England. Roughly how many parishes were there in England at that time?

There are 40 ancient counties in England, of Anglo Saxon origin.
From Norman times, the unit of local government was the Manor, and there were probably about 30,000 of them.
From Tudor times, the local Parish with its church and priest began to replace the Manor as the unit of local government, and was given more civil powers in addition to its ecclesiastical ones. There were about 12,000 of these in 1837. The numbers grew rapidly after that as more parishes were created by splitting existing ones, especially in the expanding industrial towns.
3. What is the word that means "to do with a parish"?

Ecclesiastical is to do with The Church in general.
Manorial is to do with ancient manors, each controlled by a Lord of the Manor, which preceded parishes.
Parochial is the usual word meaning pertaining to a parish although the rarely used 'parishional' is also in the dictionary.
4. What is NOT a kind of information for which parish registers were created?

A mandate of 5 September 1538 by Thomas Cromwell (Lord Keeper of the Privy Seal) required each parish to keep a record of baptisms, marriages and burials in that parish. Only about 800 original registers survive.
In 1660 the use of parish registers was resumed after the Commonwealth had replaced their function during the interregnum by local civil officials called 'Registers'.
1837 was when civil registration of births, marriages and deaths began.
6. Sometimes in a parish a second church might be built to cope with bigger congregations and for parishioners who lived a distance from the original church. What was such a church called?

Sometimes at first a chapel of ease shared its registers with the original parish church, but inevitably it soon started its own set of books.
7. Where are most original parish registers kept - those not currently in use, that is?

Up to the 1970s most parish registers were kept in the parish. Originally they were supposed to be in the Parish Chest, kept in the church vestry, but often they were kept by the vicar in the vicarage, or by the parish clerk at his home. More recently all parish registers not actually still in use have been deposited in the local County Record Office. Most have also been filmed, and are readable on microfilm or fiche, to avoid excessive handling of fragile originals.

Many of the baptism and marriage registers have also been filmed by the LDS church, indexed, and included in the IGI (International Genealogical Index).
8. Originally parish register entries were written on blank pages. When did the first printed registers come into use?

Lord Hardwick's Act of 1754 required that separate register books be used for marriages, and these were generally pre-printed. All marriages (except for Jews and Quakers) had to take place in a licenced Church of England church or chapel.
9. From what date did all parish registers consist of preprinted bound volumes?

Marriage registers had already been recorded in separate books, from 1754. Meanwhile it was normal for baptisms and burials to be recorded in a single book, sometimes on separate pages, sometimes in ruled columns, sometimes starting at opposite ends of the book.
Rose's Act of 1812 required that separate preprinted books be used for baptisms, marriages and burials. Baptism and burial registers had columns for recording specific information.
10. Between 1754 and 1837 all marriages had to be in a Church of England church, except for:...?

Lord Hardwicke's Marriage Act of 1754 stated that with the exception of Jews and Quakers, all marriages had to be in a licenced C of E church.
As Roman Catholics would not do that, their marriages had to be in secret. Methodists and other nonconformists were not excepted.
As for soldiers and sailors, as for people in any occupation, it depended on their religion.
Source: Author DaveJacobs 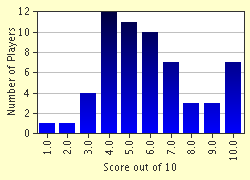