The Last Will & Testament of an ancestor is probably the most fascinating and informative source document you can discover. Here are some questions to test your knowledge of this subject.

Share on Facebook
Share on Twitter
Share by E-Mail
Author
DaveJacobs
Time
4 mins
Type
Multiple Choice
Quiz #
227,616
Updated
Dec 03 21
# Qns
10
Difficulty
Average
Avg Score
6 / 10
Plays
605
This quiz has 2 formats: you can play it as a or as shown below.
Scroll down to the bottom for the answer key.

Quiz Answer Key and Fun Facts
1. What is this the definition of: "Approval by a competent court that a Testament is genuine, and the granting of authority to a person named by the testator to carry out its terms"?

Probate is from the latin probatum, proved.
Before 1858 it was Established Church courts who were responsible for proving wills. From 1858 it passed to secular courts, namely the Probate Division of the High Court (now the Principal Registry of the Family Division of the High Court) and various District Courts.
2. When was the power of granting probate taken away from church courts and given to the state, in the form of District Probate Registries and the Principal Probate Registry in London?

The Probate Act came into effect on 11th January 1858.
From that date, nation-wide indexes of wills and admons were published annually.
3. Which of these is NOT a church court where wills were proved before the state took over?

All depended on where the testator held property.
If it was in one or more parishes within a single Archdeaconry, the appropriate court was the Archdeacons. If in more than one Archdeaconry within the same diocese, the Bishops court. If in more than one diocese in the south of England, the Prerogative Court of Canterbury. In the north of England it would be the Prerogative Court of York.
4. If a person who had already made a will wanted to make a change to it, this was done by attaching a what?

Codicil, from the latin, as many of the terms involved in wills and probate are. A codicil might be made when the testator wanted to add a new beneficiary, remove one, change his executor, etc., but leave the main body of his will unchanged.
5. If a person who has a significant estate does not leave a will, the next of kin may apply to the probate court for a grant of Letters of Administration. What is the common abbreviation for these?

Admon is from the first and last letters of the word administration.
Adminicula are small spikes on the underside of certain grubs.
Admissions are acts of letting people in, or confessions.
Admonishments are official tellings off.
6. My ancestor wanted his wife to be the person responsible for administering his will. What word did he use when he wrote this sentence: "I appoint my beloved wife Elizabeth to be the ________ of this my last will and testament". ?

Although wills were said to be executed, it was not done by an executioner!
The person is called an executor when male, executrix when female.
7. Can I obtain a copy of any will that has been through probate since 1858?

Yes, probated wills are in the public domain. The present fee, in Feb 2006, is five pounds, and you have to order a copy of the will from the Principal Registry in York.
8. What was a will called that was not written down, but was spoken by the testator on his death bed?

Latin nuncupatio, announcing. Until 1838 any such nuncupative will was legal, although there were safeguards (by the Statute of Frauds of 1678): There had to be three witnesses who had heard the deceased's wishes in his own house during his last illness, and they had to have them written down within six days. After 1838 only a man on active service could make a nuncupative will.
9. What document of great interest to family and social historians might you find associated with a will, in church court archives before say 1750?


Answer: An inventory of goods

Although all of these might be helpful to the family historian, the only one that generally exists is the inventory of the deceased's goods. The inventory takers usually went through his house room by room listing the contents, so one can get an excellent idea of what the house was like, as well as the wealth and occupation of the deceased.
10. I think my ancestors left wills probated by the Prerogative Court of Canterbury in the mid 18th century. How can I check this and get a copy of each will?

These PCC wills are held at the Family Records Centre in Islington, London. However there is no need to actually go there, as you can log on to the National Archives web site http://www.nationalarchives.gov.uk/documentsonline and do a free search on the name, occupation and location of your subject. If you find the will you want, you can download a copy for a reasonable price (3.50 pounds in 2006).
Source: Author DaveJacobs

This quiz was reviewed by FunTrivia editor Moo before going online.
Any errors found in FunTrivia content are routinely corrected through our feedback system.
Most Recent Scores
Nov 22 2022 : Guest 81: 7/10
Nov 06 2022 : Guest 5: 1/10 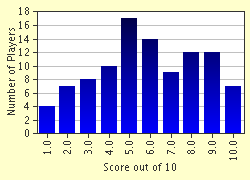