How much can you remember about the original 16 Hot Wheels cars? Good luck and have fun!

Although most of the original cars have 1967 stamped on their undercarriages, they were first sold the following year. Even though Mattel initially projected sales of 16 million, actual sales were 7 times their projections creating a black market until production could catch up.
2. How many of the original 16 cars were based on actual cars, production models or customized hot rods?

All of the Hot Wheels cars from the original year were real cars, though several were one of a kind custom cars. Their own concept cars would come the following year.
3. Harry Bradley was the first Hot Wheels designer, and drove a car that was exactly what Elliot Handler, founder of Mattel, thought his toy cars should look like. He suggested that Bradley include his own vehicle in the original 16, which he did. Which vehicle is a replica of the one Harry Bradley drove?

Elliot Handler came up with the idea while watching his grandchildren play with toy cars. They were drab in color, didn't roll well, and nearly all of foreign make. He wanted cars with 'California' looks which included bright colors, mag wheels and side pipes. But mostly they should be fast.
4. Elliot Handler, the founder of Mattel, wanted his Hot Wheels cars to have mag wheels, bright paint jobs, raked body, opening hoods with power bulges and side pipes. They also had one other thing which was a fad in the late 60s. This set them apart from other toy cars, and even later Hot Wheels. What was this seemingly insignificant thing that still sets these cars apart from others?

All Hot Wheels collectors know that a 'redline' is a late 60's-mid-70's car. They also know that any redline in mint condition will be worth anywhere from $50-$500 or considerably more if it's a rare variation.
Redline tires were phased out in 1978 but still appear occasionally on special editions.
5. Ten of the first Sixteen Hot Wheels cars were production models. Only one of these appears as a convertible. Which model is it?

This low sleek car was the favorite of many kids and collectors. Hot Heap, a car based on the show car "Tognotti's T" was also a convertible.
6. Ed "Big Daddy" Roth built a famous show car which turned into a famous Hot Wheels car. Which car was this?

Beatnik Bandit was recast for the 25th anniversary in 1993 and is still occasionally produced for limited editions.
7. Designed by Bill Cushenberry and based on Car Craft magazine's "Dream Car", the Python is one of Hot Wheels' original 16. It's original name was changed because Chevrolet was bringing out a car with the same name (which they never did). What was the original name of the Python?

Some were produced with Cheetah on the underside. If you didn't already know this, and have a Python stashed away in your attic, you'd better go check. It could be worth thousands.
Bill Cushenberry also designed the Silhouette, another of the great Hot Wheels to appear in 1968.
8. Mattel's first Hot Wheels designer, Harry Bradley, was lured away from General Motors by a larger salary. Under shady circumstances he got a hold of plans for one of GM's cars not yet in production. The Hot Wheels version was on sale before the full sized 1968 version. Which car was this?

Sales of the Hot Wheels car boosted sales of the Corvette and vice-versa, or so they say.
9. Many of the original 16 Hot Wheels cars have variations such as interior color, vinyl tops or differences in colors. One model has open hood scoops and louvered back windows (in some colors), making it the most diverse and difficult to collect of all originals. Which vehicle is this?

These cars came in as many as 14 colors by the time they were retired with some colors such as pink and lavender being very hard to find.
10. Supposedly the first Hot Wheels car to roll off the line and certainly one of the most famous, this model was recast for the 15th anniversary in 1983 and the 25th anniversary in 1993. It still sometimes appears as part of the regular line in stores. If you see one, you'd better grab it because it won't be there long. Which car is this?

I've never seen it with a plastic base. It's one of the classic car designs of all time - the 1967 Camaro.
Source: Author knto 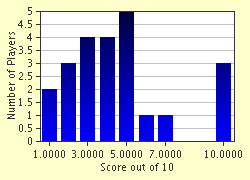 
Other Destinations
Explore Other Quizzes by knto