Most of us have rolled a pair of dice while playing a game. Dice have a very interesting history. Let's shake, rattle and roll your brain cells and see what comes out!

Quiz Answer Key and Fun Facts
1. How many pips would you find on a pair of dice?

This does not affect the dice in any way other than appearance and either style can be used when playing games.
3. Which one of these casino games makes use of a pair of dice?

Craps is a gambling dice game that is played in virtually every casino in the world. Players place bets on the outcome of an upcoming roll of a pair of dice. Wagers can be placed against the bank or against another player. The unusual name comes from the French word 'crapaud'.

This word means 'toad' and was descriptive of the crouched position in which people would play with dice in the streets. This game has a language all its own and if you decide you might want to play, it is advisable to watch for a lengthy period of time to learn the rules as well as the slang.
4. What are loaded dice?

Loaded dice are sometimes called crooked dice, a reference to the fact that the sides are not equal and balanced. This is done to favor some results over others. The roll of a pair of dice should always result in a random number. Cheaters will attempt to influence this outcome by shaving one side of the die or by implanting a hidden weight inside the die.

It is for this reason that most casinos will not allow anyone to bring in their own dice.
5. One of the most popular dice games around the world is Yahtzee. According to Hasbro, the company that produces the game, where does the name come from?


Answer: It was invented on a yacht

Games very similar to Yahtzee have been played for thousands of years using a variety of other names. Hasbro claims the game was invented by an anonymous Canadian couple who played the game while on a yacht. They called it "The Yacht Game" and the name was changed to Yahtzee when the company used their idea.

There are many similar dice games such as Cheerio, Poker Dice, Crag, and Yacht.
6. For luck, on a pair of white Asian-style dice, the pips on the numbers one and four sides are usually what color?

On a pair of Western-style dice, the pips are usually black. On an Asian-style pair the numbers one and four will be red, while the rest are black. This is because it is believed that black and white together without another color can cause bad luck. Red is used because it is the color of good luck. Fours are red because in Chinese the word for 'four' is a homophone for the word for 'death' and the red is used to counteract this connection.
7. All true dice have only six sides.

Dice can have many sides, usually even in number. Found in some game and hobby stores, a zocchihedron is a 100-sided dice that can be used in a variety of games. In 2011, The British Museum in London displayed a pair of ancient Roman icosahedral dice which have 20 sides each. The popular game 'Scattergories' makes use of an icosahedral die.
8. For many centuries gambling with dice was part of which ancient Roman festival?

Gambling with dice has been popular since before written time. In ancient Rome it was illegal to gamble with dice at any time other than during Saturnalia. During this carnival, many vices were indulged in which were banned at any other time of year. Gambling with dice was such a problem during this time that many laws were enacted. Being a professional gambler was a common line of work although it was synonymous with being of low morals.

Many Italian museums have displays ancient dice which are almost invariably shaved.

The other three options are all ancient Mayan cities.
9. Divination using dice is called which of the following options?

Cleromancy has been practiced for centuries and was very popular amongst Tibetan Buddhists. The biblical term 'the casting of lots' is believed to be a form of cleromancy. As many early dice were made from naturally occurring sources, such as stone and bone, it was believed that some dice were endowed with magical abilities to foretell the future.
10. If you roll a pair of dice and it comes up 'snake eyes', what did you roll?


Answer: A pair of ones

'Snake Eyes' is the term for rolling a pair of ones or aces as they are called in some parts of the world. A pair of sixes are called 'boxcars', and 'Little Joe' is a pair of fours. There is a lot of slang, myths, and mathematics to playing with dice. But in the end, as long as you are playing with a fair pair of dice, the number rolled will be random.
Source: Author dcpddc478 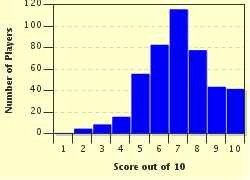 Related Quizzes
This quiz is part of series Everything and Anything:

Here is a mix of quizzes about everything and anything.