This is not what you think! It isn't a quiz about B-movie monsters who suck your innards and regurgitate you for their youngsters to feed on. It's really about man .. eating ... bugs!!!!

Quiz Answer Key and Fun Facts
1. There are an increasing number of people out there who believe it is more beneficial, and more nutritious, to feast on insects. Do you know what they are called?

It's absolutely true! I was thinking about my daughter's nauseous collection of plastic insects, which she stores in a sweetie jar, when I decided to do some research. The funny thing is, as you'll find out - there's a quite an argument for trying this new cuisine!
2. Do you realise that 100 grams of cricket contains ...?

If you compare 100 grams of cricket with 100 grams of beef, chicken or lamb ... you'd probably ingest less fat and equally the same amount of protein! Buy yourself a fishing net and 'hop' off to grab a few!
3. Weaver ants are commonly eaten in ...

In southeast Asia, there is not the same predominantly 'western' revulsion toward eating bugs. Weaver ant eggs are widely used in soups and salad in Thailand ... try adding a few to your vegetable broth!
4. What is the main moral argument for eating insects as opposed to livestock?

When you really think about it, our squeamish reaction to eating insects is nonsensical. If I had to watch what goes on in a slaughter house and then sit and eat a lamb chop, I'd probably prefer to gulp down the multitude of flies that invade my home every summer!
5. What do deep-fried maguey worms taste like, according to one entomopaghy veteran? (Not me!)

When I read this I felt very odd .. mostly because it was before lunch and I like onion rings! I was a bit concerned that my local cafe proprietor had already discovered the maguey worm!
6. You shouldn't attempt to eat insects if you are already allergic to what?

Insects and many shellfish belong to the same phylum - arthropoda. If you are able to eat insects though, don't eat them raw ... and that goes for mammal meat too!
7. Who, in the bible, has set a precedent for eating locusts?

Mark 1:6 ... "Now John was clothed with camel's hair, and had a leather girdle around his waist, and ate locusts and wild honey."
One example of an early entomophagist ... so there's no objection on religious grounds then!
8. How do the Chinese silkworm harvesters prefer their silkworms?

After the silk is harvested, so are the silkworms ... resourceful!
Simply fry the silkworms in butter or lard, add the yolk of an egg and season with salt and pepper. (From "Phytologia" by Erasmus Darwin)
9. When you've caught a 'bug' (viral one!) then it is possible that some insect-filled dishes may help you to recover. But what is supposed to help with virility?

Yes, it's true! Why not share a nice romantic tarantula stir-fry with your truly beloved, washed down with a little ant brandy - which aids digestion!
10. What sweet ingredient is commonly used to make mealworms, crickets, and ants more attractive to confectioners interested in broadening their market appeal?

There are quite a few chocolate-based recipes containing insects. For instance, chocolate chip mealworm cookies and chocolate covered crickets are common recipes in entomophagy cookbooks. And remember, there are people out there who eat kangaroo, ostrich, monkey and dog... so personally, I would sooner have the bug eaters to dinner!
Source: Author bagendbo 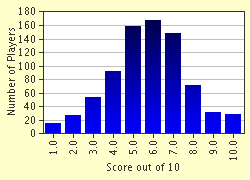 Related Quizzes
1. Eat Your Flowers Average
2. The Gastronomic Guild Gets Goofy Difficult
3. You Ate WHAT?! Easier
4. Don't Eat Me Average
5. You Really Gonna Eat That? Difficult
6. Yeuch! I'm Not Eating THAT! Tough
7. 'They Eat Dogs Here' Average
8. You Can't Eat That, But You Can Sure Try! Average
9. You Can't Eat That! Can You? Average
10. That Tastes Disgusting! Average
11. No Thanks, I've Lost My Appetite Tough
12. Wham-Bam, Thank You Spam Tough


Other Destinations
Explore Other Quizzes by bagendbo