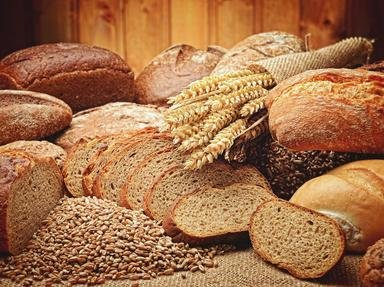 Yum! Popcorn is the favorite snack of Americans; more than 17.3 billion quarts of it are eaten in the U.S. each year (almost 5 pounds per person!). Let's see how much you know about this magical munchie.

Share on Facebook
Share on Twitter
Share by E-Mail
Author
lompocjoe
Time
6 mins
Type
Multiple Choice
Quiz #
327,923
Updated
Dec 03 21
# Qns
10
Difficulty
Tough
Avg Score
5 / 10
Plays
447
This quiz has 2 formats: you can play it as a or as shown below.
Scroll down to the bottom for the answer key.

Quiz Answer Key and Fun Facts
1. Popping corn comes in two distinct varieties. What are they?


Answer: Snowflake (or Butterfly) and Mushroom

The irregular shaped pieces of popcorn sold in theaters and popped at home are called 'snowflake' or 'butterfly' because they produce large kernels and have lots of openings for toppings such as butter. A rounder 'mushroom' kernel is suitable for the candy confections like popcorn balls where pieces are easier to pack into a solid shape and are not as easily crushed.

The round popcorn found in 'Cracker Jack', for example, is of the 'mushroom' variety.
2. Which statement about popcorn is true?

Three of the statements are just a wee bit off the mark. October is National Popcorn Poppin' Month. The largest popcorn celebration is the Marion, Ohio Popcorn Festival. Finally, more popcorn is eaten at home (over 60%) than in outdoor venues. Sorry, ladies, the 'old maids' label is the only correct answer.
3. Speaking of the Marion, Ohio Popcorn Festival, approximately how many people attended this event in 2009?

What's not to love about a Popcorn Festival? Since 1981, Marion (population 35,500 give or take a few) has held this event on the first weekend after Labor Day. Visitors partake in such activities as the crowning of the Miss (and Ms., Miss Teen, Miss Teeny Pop) Popcorn Festival Queen, the parading of Poppin' Pooches, and the running of the Popcorn 5000 5K marathon.
4. Wouldn't you just know that someone would find something wrong with popcorn? Which of these illnesses is real?

Very small airways in the lung called bronchioles may become inflamed when too much diacetyl is inhaled. What is diacetyl you might ask? Well, the next time you open up that bag of microwaved butter popcorn, step back a bit. Diacetyl is a natural substance heated in a factory setting to give microwave popcorn its buttery taste.

The condition is known as bronchiolitis obliterans. In 2009, a Colorado man who consumed two bags of butter-flavored popcorn every day for several years received a settlement of $7.5 million for his 'popcorn lung.' He died one day before the jury announced its decision.
5. By itself, popcorn is a good snack if you're watching your weight, but when you go to the movies, it doesn't take long for the benign grain to turn into a gut-busting monster. Here's the situation: you order a large bucket of butter popcorn that has been popped in coconut oil and a large soda. How many calories will you consume before the credits roll at the end of the movie?

Depending on whether or not real butter was used as a topping, you could have eaten the equivalent of 3 Big Macs...probably not something many of us would consider doing. It's not just the calories; that same combination would give you more than 60 grams of saturated fat (more than we should have in 3 days) and 1500 milligrams of sodium. Nutritionists agree that if you must have popcorn, order a medium 'plain' along with a medium soft drink. Also, canola (a word derived from 'Canada' and 'oil') is preferred over all other oils.
6. In 1945, a man we popcorn lovers owe a great deal to, was working at the Raytheon Corporation building magnatrons for radar sets. One day, he noticed that a chocolate bar he had in his lab coat melted when he stood too close to one of the units. It seemed as if the magnatrons produced enough heat to cook food. After a few more experiments, what invention emerged from the Raytheon Corporation?

Percy Spencer was fascinated with the prospect of flameless cooking and popcorn was an ideal test food --it was fun to pop and even better to eat. Spencer created a high density electromagnetic field by feeding microwave power into a metal box in which it had no way to escape.

When food was placed in the box with the microwave energy, the temperature of the food rose rapidly. Microwave popcorn became so popular in the new-fangled machines that it received its own setting on most dials. Thank you, Percy Spencer! You deserve to be honored on a postage stamp.
7. My apologies to everyone who loves Nebraska, but it doesn't rank very high on my list of "Gee, where would I like to retire?" states. However, there is one city that I might visit on my way to Hawaii. Which one and why?


Answer: North Loup because it calls itself the 'Popcorn Capital of the World'

This little (2007 population: 339) village in Nebraska proudly claims the title of 'Popcorn Capital of the World' because there are a number of farms in the area devoted to growing the corn. In 2003, Nebraska produced 326 million pounds of popcorn, followed by Indiana (250 million pounds) and Illinois (203 million pounds.

However, there are several other towns in the U.S. ready to do battle with North Loup for the title, among them Marion, Ohio (see Question 3), Van Buren, Indiana, and Shaller, Iowa.
8. Gibberella, fusarium, and crazy top are all types of what?

Growing corn for popping isn't easy. It has to picked at a certain time, it has to receive just the right amount of moisture, picked cobs must be dried at a particular temperature, and size does matter when it comes to the kernels. However, even before the cobs are picked, the fields must be protected against a wide variety of diseases.

Besides the ones mentioned above, other yuck inducers include Diplodia, Pythium Stalk Rot, and Stewart's Disease.
9. You're traveling through Indiana and find yourself near the intersection of Popcorn Church Road, Popcorn River Road, Popcorn Road, and W. That St. Where are you?

Popcorn, Indiana is an unincorporated community in Perry County near Bloomington. It's also the birthplace of the late Dale Humphrey of the Dale & Thomas Popcorn Company. Mr. Humphrey was proud of his small hometown and when two businessmen from New York, Warren Struhl and Richard Demb, met Mr. Humphrey, they were so impressed with his enthusiasm for popcorn that they returned home and opened up the Dale & Thomas company.

The name 'Popcorn, Indiana', appeared on their packages (and still does so on one of their wholesale brands).
10. Popcorn production is regulated by what division of the Department of Agriculture?

Created in 1931, the Division of Cereal Crops and Diseases is part of the USDA's Bureau of Plant Industry, Soils, and Agricultural Engineering. It also oversees the enforcement of the Popcorn Promotion, Research, and Consumer Act signed into law by President Clinton on April 4, 1996.
Source: Author lompocjoe

This quiz was reviewed by FunTrivia editor WesleyCrusher before going online.
Any errors found in FunTrivia content are routinely corrected through our feedback system.
Related Quizzes
1. Bread - Ten Things You "Knead" To Know Average
2. All You Knead is Loaf Easier
3. A Bouquet of Flours Average
4. International Breads Tough
5. Breads of the World Easier
6. Another Bun in the Oven Average
7. Got a Hankerin' for Some Cornbread? Average
8. Let's Fry Some Dough! Average
9. The Great Pumpernickel Quiz! Average
10. BREAD - Ten Things you Knead to Know Average
11. Roll Out the Dough, Boys Easier
12. First, you take the pilaf Average