The U. S. Nickel Trivia Quiz

This quiz tests players' knowledge of the United States nickel. Best of luck!

Quiz Answer Key and Fun Facts
1. What fraction of a United States dollar is a nickel worth?

The value of most coins is given in relation to the standard unit of currency in a nation. In the United States, a nickel is equal to five hundredths or one-twentieth of a dollar.
2. What was the five-cent piece called before the American Civil War?

By comparison, the value of a dime is 4.409 cents per gram.
4. What was the name of the one cent coin that was actually the first United States coin to be called a nickel?

The reverse of the Shield nickel contains the number 5 encircled by thirteen stars.
6. Which of the following is not true regarding the Liberty Head nickel?

Other than the Wartime Nickels that were minted from 1942 to 1945, all five-cent nickels contain 75% copper and 25% nickel.
7. What famous sculptor designed the Buffalo nickel that was minted between 1913 and 1938?

The Buffalo nickel is also commonly called the Indian Head nickel. There is some debate as to which individual is pictured on the obverse of the coin. Iron Tail, John Big Tree and Two Moons are three Indian chiefs commonly mentioned as being pictured.
8. What domicile appeared on the reverse of the nickel from 1938 to 2004?

Monticello is an Italian word meaning little mountain. The estate was formerly owned by Thomas Jefferson and it is located near Charlottesville, Virginia.
9. What was the name of the series of nickels minted in 2004 and 2005?

The 2004 and 2005 nickels contained designs that commemorated the westward journey of Meriwether Lewis and William Clark.
10. In 2006 the nickel returned to its 1938 to 2004 design with several minor changes. Which of the following is one of those changes?

The 2006 nickel is the first United States coin to feature a president facing forward. Jefferson's portrait is based on a painting completed in 1800 by Rembrandt Peale.
Source: Author Triviaballer 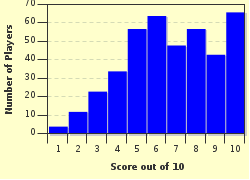