This quiz is all about my famous fungus, the mushroom. Good luck!

Quiz Answer Key and Fun Facts
1. The term mushroom is typically used to describe fungi that have three main parts. These parts include the stem, cap, and which other part that can also be found on a fish?

Scientifically the gills of a mushroom are referred to as lamella. The gills are located under the cap of the mushroom and they aid in spore dispersal. There are actually as many as eight different classifications of mushroom gills based on how they are attached to the mushroom stem.
2. The cap is one of the easiest ways to identify a mushroom. Possibly the most well-known shape is exemplified by the button mushroom with its hemispherical arrangement. What is the more common name for this shape that looks similar to the human eye?

In addition to convex, mushroom caps can also be classified as campanulate, conical, depressed, flat, ovate, and umbilicate. One well-known example of a mushroom with a convex cap is the portobello which is a hearty mushroom that is often used as a meat substitute.
3. A particular type of mushroom is unique in that it does not have an open cap with spore-producing gills. With a name like a cheesy potato chip, what mushroom variety is named based on how its spores are emitted like dust upon contact?

Certain types of puffballs mushrooms feature stalks while others do not. Stalked puffballs are not edible to humans as they are overly tough and bitter. Interestingly, in Tibet puffball mushrooms have been used to make ink.
4. One popular type of mushroom has a network of ridges that form a honeycomb shape. Valued in gourmet cooking, what type of mushroom should never be eaten raw as it contains hydrazine toxin?

Compared to many other mushroom varieties morel mushrooms are more difficult to cultivate. In spite of this morels are valued for their savory flavor that is especially prevalent in French dishes. Morels come in numerous shapes, sizes, and colors and as many as 34 species have been recognized.
5. While it is commonly used as a synonym for mushrooms in general, this term is more accurately used to describe inedible and poisonous mushrooms with an umbrella shape. What is this fungal term that shares part of its name with a video game character created by Nintendo?

The term toadstool is believed to have come about in the 14th century as a combination of the root words toad and stool. At the time of its derivation toads were thought of as highly poisonous creatures as were the mushrooms that were called toadstools. First appearing in "Super Mario Bros." in 1985, the character Toad appears with a mushroom cap on top of his head.
6. A popular mushroom from East Asia grows on the decaying wood of deciduous trees. What is the name for this edible mushroom that has been used in Japan since 1985 to help patients with gastric cancer?

Shiitake mushrooms are cultivated throughout Japan, China, and Southeast Asia. Also called the sawtooth oak mushroom, the shiitake is used in dishes including miso soup, dashi, and Buddha's delight.
7. While most mushrooms are ingested as food some mushrooms are capable of causing hallucinations. Which of the following is a psychedelic compound that has been identified in over 100 species of so-called magic mushrooms?

While they may seem similar at first glance, psilocybin-containing mushrooms are distinguished from poisonous mushrooms in that the effects are typically temporary. It is believed that as far back as 4000 BCE psilocybin mushrooms have been used in religious and recreational contexts to induce feelings such as euphoria.
8. By 2016 about 14,000 species of mushrooms had been identified. What term is used to describe individuals that study and classify fungi such as mushrooms?

Mycology is considered a branch of biology and mycologists analyzes the genetic makeup of fungi, their uses for humans such as food, and their dangers. Fungi like mushrooms have been written about dating back to Euripides in the 5th century BCE and Pliny the Elder in the 1st century CE. In addition to mushrooms, truffles are another highly-prized edible fungi.
9. In common language the term mushroom is used to describe something that grows extremely fast. Comprising about 90% of the composition of many mushroom species, the absorption of what causes mushrooms to grow at alarming rates in certain environments?

Many mushrooms grow from a tiny fruit body known as a sporocarp. In areas of high moisture mushrooms will grow much faster than in dry areas. While most mushrooms are relative small and can be picked up by hand a massive mushroom specimen in China in 2011 was estimated to weigh about 1,000 pounds.
10. One popular method of eating mushrooms is to place toppings like crab, bread crumbs, and cheese inside the cap. Also used as a method to prepare a Thanksgiving turkey, what is the common term for this type of mushroom preparation? 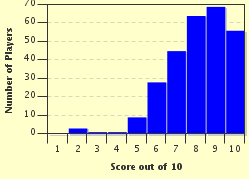 Related Quizzes
This quiz is part of series Wacky Racers:

These are the quizzes that the Wacky Racers (Babsr, Bernie73, Shadowmyst2004 and TriviaBaller wrote for the Funtrivia Amazing Race 3.