Waiter! Waiter! There's a Fly in My Soup! Quiz

A fly in my soup, a worm in my spaghetti, and a beetle in my stew. See what other incredible edibles I found during my ten course meal at a new restaurant in town. Bon appetit!

Quiz Answer Key and Fun Facts
1. HORS D'OEUVRES: I normally crunch on a bowl of peanuts for my appetizer but the restaurant served fried grasshopper for me to nibble on instead. What is the Mexican name for this treat?

Chapuline/s are commonly eaten in areas of Mexico, especially the southern state of Oaxaca. High in protein, these crunchy snacks are fried with garlic, onions and chili pepper for extra flavouring. They have a slight taste of chicken, but watch out though as the wings can be chewy and the antennae tickle as you swallow them down.
2. APPETIZER: A small appetizer was placed before me. I took one look at it and nearly ran, but the waiter persuaded me to try a small serving of duck embryo in egg. What is the name for this Asian dish?

Usually sold as street-food in areas of the Philippines, this delicacy is also eaten in other Asian countries including Cambodia, Vietnam and Thailand. Known as an aphrodisiac, balut is a duck egg which has been fertilised for between two and three weeks.

The embryo just starts to form recognisable features before it is boiled and then eaten from the shell. This practice is highly controversial to animal rights groups.
3. WINE: I needed a strong drink after eating my appetizer and the waiter kindly served me a shot glass containing snake wine. Are venomous snakes really used in making this alcoholic beverage?

Snakes have been a popular part of Chinese culture for centuries, including mythological stories of Nuwa, a goddess with the body of a snake and head of a human. Body parts have been used in Chinese medicine; the snake skin treating diseases, the bile used as tonics, and dried snake powder used in the treatment of cancer.

Some places still use the age-old custom of adding live snakes to alcohol until they drown. The venom becomes inactive when it is steeped in ethanol for many months, the wine served in shot glasses and consumed as a restorative.
4. SOUP: The next course I was served was a bowl of hot bird's nest soup. What is the main ingredient that is added to a basic chicken stock which makes this dish so unusual?

Authentic bird's nest soup is made from the saliva which collects in the twigs and branches of a bird's nest belonging to a swiftlet. These small birds (Aerodramus fuciphagus) build their nests in caves around south-east Asia, and by the time the nests are collected by humans, they contain mainly saliva and next to no plant material.

The nests are stored and dried, then soaked overnight in water before being added to chicken stock to make a hearty soup.
5. FISH: And now on to the fish course. The poisonous puffer fish is used to make which Japanese delicacy?

Fugu is a dish made with very thin slivers of puffer fish, sometimes decorated ornately on plates in delicate designs. The skin and liver of this fish are highly toxic and can cause death if not handled properly. Only specially authorised chefs are allowed to fillet and serve fugu in restaurants; this is only after undergoing years of rigorous training and testing.
6. INTERMEZZO: There is nothing quite like sorbet for cleansing the palate between courses, but this restaurant is slightly different. What is the name of the pungent Chinese dish where eggs have been preserved in a saline solution consisting of clay and salt for a number of weeks?

Century eggs are also known as hundred-year egg, thousand-year egg, millennium egg, or pidan. Chicken or duck eggs are preserved in salt, lime and ash, then covered with rice husk for around 4-5 weeks. Over time this breaks down the protein and fats, but raises the acidity level.

The yolk turns a dark green colour with a creamy texture, and the egg white resembles an amber coloured gelatinous slimy substance.
7. MAIN COURSE: I was hoping that I would be served something substantial for my main course, such as burger and fries or spaghetti bolognese. Instead, I was served shirako, a dish using fish sperm obtained from the male cod. What does the name "shirako" mean?

Milt, or shirako, are the sperm sacs usually obtained from a male cod, but other fish can be used including salmon, squid and puffer fish. It tastes of soft custard if it is steamed, or has a crunchy texture if deep fried. It is usually served raw with sushi and a little soy sauce.
8. CHEESE: The image shows a serving of pecorino sardo cheese from Sardinia. My waiter was quite insistent that I tried "casu marzu", the same cheese but with the addition of what extra ingredient?

Casu marzu translated into English means "rotten cheese". The cheese fly (Piophilia casei) is encouraged to infest pecorino sardo cheese so that maggots putrefy the cheese, causing it to become soft and pulpy. Some people remove the maggots first before they eat the cheese, where others prefer to eat the live maggots.

The maggots have a tendency to leap in the air, so people tend to cover their faces as they eat! Although made in Sardinia, it is an illegal foodstuff.
9. DESSERT: I was expecting strawberries, bananas and even marshmallow to accompany my dessert but this restaurant was vastly different. With an idea taken from Philadelphia's Mueller Chocolate Company, what type of food did I dip into the softly flowing chocolate fountain that was a centrepiece on my table?

The Mueller Chocolate Company has been a family owned business from Philadelphia since 1980. They make original chocolates, but also have a fun and quirky side, with a lot of their pieces made into the shape of body parts. These include hearts, lungs, liver, eyes and kidneys.

Their chocolate covered onion is described as "Sweet on the outside but nasty on the inside" and featured in Season 3 of the television show, "Bizarre Foods".
10. COFFEE: At last my meal has come to an end and I am looking forward to drinking a strong, fragrant cup of coffee. My waiter served me a cup of Kopi Luwak, an Asian coffee which can be described as what?


Answer: A lively blend infused with coffee berries eaten and defecated by the Asian palm civet

The Asian palm civet is a small tree dwelling mammal native to south-east Asia. They eat fruit from mango trees, as well as rambutan, chiku, and coffee berries. Once they have defecated, the small pellet-shaped feces are collected and then dried as normal coffee beans.

There are a number of civet farms, mainly on the island of Sumatra where Kopi Luwak is a major export. It is believed to be one of the most expensive types of coffee in the world, along with black ivory coffee which is made with the faeces of elephant after they have eaten coffee berries.
Source: Author Plodd 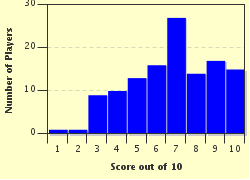 Related Quizzes
1. Eat Your Flowers Average
2. Man Eating Bugs! Average
3. The Gastronomic Guild Gets Goofy Difficult
4. You Ate WHAT?! Easier
5. Don't Eat Me Average
6. You Really Gonna Eat That? Difficult
7. Yeuch! I'm Not Eating THAT! Tough
8. 'They Eat Dogs Here' Average
9. You Can't Eat That, But You Can Sure Try! Average
10. You Can't Eat That! Can You? Average
11. That Tastes Disgusting! Average
12. No Thanks, I've Lost My Appetite Tough