I present to you some rather challenging queries on the world of linguistics...good luck!

Quiz Answer Key and Fun Facts
1. Who was considered the 'Father of Linguistics', a Swiss guy, who authored the seminal book entitled 'Course in General Linguistics'?

2. What is the name of the linguistic school which attempted to uncover 'Discovery Procedures' that are internally imbedded, and compose the underlying units of language?

Leonard Bloomfield's 'Language' laid down the science of language between 1933 to 1950, until Chomsky universalized the idea of language. The areas of phonological utterances were strictly analyzed, rather than the deep intentional structure...this is where they went wrong, since we know that utterances in general can be arbitrary.
3. Since language is arbitrary, but contains 'Permitted Moves', what term best describes this view of communicational systems?

4. What three components, generally, make up a system of a typical language?

5. What is the smallest segment of sound, that comprises the basic building blocks of a language?

Phonemes on the average are 35 per language, English has 44 phonemes such as b, p, i, e, etc. The languages of the Caucasus may have the most with 89.
6. What is the term for unchanging, gliding vowels which combine two distinct vowel sounds into a single one?

7. The morpheme is the smallest syntactical unit. How many morphemes would the word 'antidisestablishmentarianism' have?

They are anti- , dis, establish, ment, arian, and ism.
8. Which of the following is not a kind of morpheme that is found in most languages?

9. What are the two main structures found when deconstructing a sentence into a tree-diagram?

Noun phrase and verb phrases also can be decomposed into smaller bundles....NP= D and N, etc.
10. After, we analyze the syntactical order and construction, and find it worthy of our 'Permitted moves', does it mean that it will convey an idea cogently to us? 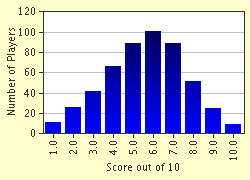