Linguistic Anthropology deals with communication, language acquisition, language origins, and the cultural connections to language use. Have fun...

Quiz Answer Key and Fun Facts
1. The study of the sounds of language is known as:

Phonology is split into two subordinate units: phonetics (precise identification and description of speech sounds), and phonemics (identification of the system of the sets of sounds of any language).
2. Which of the following words can be described as containing an affricate?

An affricate is a consonant or consonant pair that starts with a stop and finishes with a fricative - the dg sound in budged meets this description.

Pill begins with a stop, hammer has a nasal (the 'em' sound) in the middle, and huffle has two fricatives (h and f).
3. The study of the structure of words is known as:

The smallest segments that carry meaning are called morphemes.
4. This early anthropologist is considered to be one of the giants of modern linguistics...who was it?

Sapir added psychological theory to the study of language.
5. Spoken language is believed to have arisen in what early human group?


Answer: No one knows for sure

There is speculation regarding spoken language in Neanderthals. Unfortunately, the delicate hyoid bone is rarely found in excavation sites. Some suggest that speech may have originated in Homo habilis, but this is currently under great debate.
6. Ferdinand de Saussure made a distinction between speech and language. In his words, how did he label these two categories?

de Saussure regarded language to be a social fact, arising as a set of conventions shared by a community of speakers.
7. Fricatives are formed by:

Fricatives are formed by narrowing the air passage. There is audible frictional noise due to this constriction.
8. True or False : Sounds can be voiced or voiceless.

For example, a voiced fricative is at the start of "zip" whereas "sip" begins with a voiceless fricative.
9. Noam Chomsky believes that there is a(n):

The Universal mental grammar, as noted by Chomsky, is the central theoretical construct of modern linguists.
10. One who studies language can be considered a(n):


Answer: all answers are correct 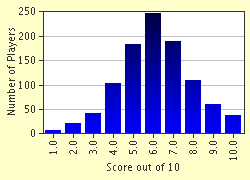 
Other Destinations
Explore Other Quizzes by Leki