So you think you know your Sondheim? Can you pick the show given just a brief phrase from the lyrics? Good luck!

Quiz Answer Key and Fun Facts
1. In which show would you hear the line "Whatever you can do with them, she's done"?

This is from the song "The Story of Lucy and Jessie", which is Phyllis' number in the Follies sequence at the end of the show. For the 1987 London revival, it was replaced with "Ah, but Underneath!", performed by Diana Rigg.
2. Which show includes the line "This is the world I meant"?


Answer: Into the Woods

From the beginning of the Witch's "Lament" for her adopted daughter Rapunzel, where she bitterly regrets the fact that she couldn't keep Rapunzel safe in her tower.
3. In which show does a character sing "Too busy to know that they're fools"?

From the wonderful "The Ladies Who Lunch", where the acerbic Joanne, armed with her vodka stingers, reflects on the different ways of being a married woman. This line refers to "the girls who play wife".
4. Which show has a song with the line "Where others would hurry I stroll"?

From "I'm Calm", which is Hysterium's attempt to calm himself down after Pseudolus persuades him to dress up as a girl and play dead. It doesn't work!
5. In which show would you hear "I was just acting for someone up there"?

Charlie Guiteau's defence for killing President Garfield, from "The Ballad of Guiteau". "But God was acquitted and Charlie committed".
6. Which show has the line "We'll do wonders, won't we"?

Sweeney sings to his razors and Mrs Lovett sings to Sweeney in the disturbing duet "My Friends".
7. In which show would you hear someone sing "And there's every indication that they're planning to stay"?

From "Chrysanthemum Tea", one of my favourite Sondheim numbers. "They" are of course the American ships who have arrived to cause havoc in an isolated Japan.
8. Which show includes a song with the line "She'll grow older by the hour"?

"And be hopelessly shattered by Saturday night". The Countess convinces her young friend Anne Egerman to go head to head with the woman she suspects is her husband's mistress, in the song "A Weekend in the Country".
9. In which show would you hear "The choice may have been mistaken"?


Answer: Sunday in the Park with George

"The choosing was not". From "Move On". I'm a fan of Jenna Russell's interpretation of Dot from the 2006 London production.
10. In which show would you hear the line "He has lots of hills to climb"?


Answer: Anyone Can Whistle

"And a hero doesn't come till the nick of time". From "There Won't be Trumpets", which was cut from the original production but included on the cast recording.
Source: Author spod 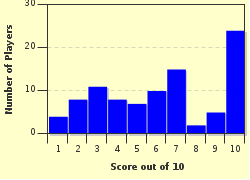 
Other Destinations
Explore Other Quizzes by spod