Stephen Sondheim is perhaps the single most important person in Broadway history, so what can you tell me about this composer and lyricist?

Quiz Answer Key and Fun Facts
1. Where was Sondheim born?

Stephen Joshua Sondheim was born to Herbert and Janet Sondheim on March 22, 1930. He grew up on the Upper West Side and later lived in Pennsylvania, where he met Oscar Hammerstein II, of Rodgers and Hammerstein fame.
2. Sondheim was raised by both of his parents.

When Stephen was ten, Herbert abandoned the family and Sondheim lived with his mother, "Foxy". She was a hypochondriac and had a very negative impact on his life.
3. Which other musical theatre lyricist was Sondheim's mentor?

Oscar Hammerstein II was a famous musical theatre lyricist whose credits include "Oklahoma!", "South Pacific" and "Carousel". Hammerstein died in 1960 of cancer, having won six Tony Awards for his work.
4. What was the first Broadway musical Sondheim wrote both music and lyrics for?

"A Funny Thing Happened on the Way to the Forum" is about a slave, Pseudolus, who longs for his freedom. To earn it, he must unite a young man named Hero with the lady he loves, Phylia.
5. Which of these people has Sondheim not worked with?

Sondheim partnered with Lapine to write "Into the Woods", "Passion" and "Sundays in the Park With George". Harold Prince directed many of Sondheim's projects in the 1960's and 1970's. George Furth wrote "Follies", for which Sondheim wrote the music and lyrics. David Mamet is known for writing straight plays such as "Glengarry Glen Ross".
6. For which show did Sondheim win his first Tony award?

"A Funny Thing Happened on the Way to the Forum" opened on the eighth of May in 1962, with Zero Mostel as Pseudolus. The book was written by Burt Shevelove and Larry Gelbart.
7. What religion does Sondheim practice?

Sondheim has never been a particularly strict Jew. In fact, the first time he was inside a synagogue was when he was 17!
8. Sondheim's most autobiographical musical, "Sunday in the Park with George" lost the Tony Awards for Best Musical to what show?

"La Cage Aux Folles", with music and lyrics by Jerry Herman and book by Harvey Fierstein, involves a gay couple, Albin and Georges who respectively perform at and manage a nightclub. When Georges' son brings his fiance's anti-homosexual parents home, Georges needs to get rid of Albin!
9. Which other musical theatre composer did Sondheim mentor?

Jonathan Larson is probably best known for writing the book, music and lyrics to the rock opera "Rent", based on Puccini's "La Boheme". Larson died an untimely death in 1995 at 35 from Marfan's Syndrome.
10. How many songs were added to the 2004 production of "The Frogs", for which Sondheim wrote the music and lyrics?

"The Frogs" is a loose adaptation of Aristophanes' play. It ran from July 22, 2004 to October 10, 2004 and starred Nathan Lane, who played Dionysos, and Roger Bart, who played Xanthias. Lane and Bart had previously been seen together in Mel Brooks' "The Producers".
Source: Author anthonyrappfan 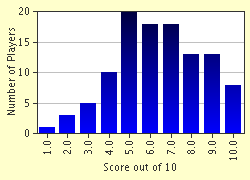 
Other Destinations
Explore Other Quizzes by anthonyrappfan