I will give you a lyric from a show for which Sondheim was responsible for either the music, lyrics, or both, and you fill in the missing word(s).

This line is from the song "Moments in the Woods." Cinderella's prince has just had an affair with the Baker's wife, and sings to her, "This was just a moment in the woods. Our moment. Shimmering and lovely and sad."
2. What phrase is missing in this lyric from "Follies?" "I dim the lights and ___________________."


Answer: think about you

This one is from the song "Losing my Mind." The next lyric is, "Spend sleepless nights, to think about you. You said you loved me, or were you just being kind? Or am I losing my mind?"
3. What is the repeated missing word in this line from "Gypsy?" "If mama was married we'd live in a house as _________ as __________ can be. Just mama, three ducks, five canaries, a mouse, two monkeys, one father, six turtles, and me."

In the song "If Mama was Married" Louise is dreaming of a life settled down. Her notion that such a full house would be private is amusing.
4. Can you complete this lyric from "A Little Night Music?" "One thousand whims to which I give in, since her smallest tear turns me ________."

This line is from the song, "You Must Meet My Wife." The next line is "I never dreamed that I could live in so completely demented, contented a fashion."
5. This song from "Sunday in the Park in with George" was made famous by Bernadette Peters. Do you know what verb is missing? "But, Mama, the things that he does, they twinkle and ___________ and buzz."

In the song "Children and Art," Dot, originally played be Peters, is singing to her deceased mother about how skilled her artist boyfriend is and begins to examine what is important to her.
6. Do you know what Mrs. Lovett was surprised to be happy to find in this line from "Sweeney Todd?" "Never thought I'd live to see the day men'd think it was a treat, finding poor ____________ wot are dying in the street."

Mrs. Lovett sing this in "The Worst Pies in London." This lyric mentions animals, but later Mrs. Lovett mentions pussycats when she goes on to describe Mrs. Mooney and her pie shop. That is where she sings, "I've noticed something weird. Lately all the neighbors' cats have disappeared. Wot I calls enterprise, popping pussies into pies. Wouldn't do in my shop. Just the thought of it's enough to make you sick. And I'm telling you them pussycats is quick."
7. We're getting a bit more obscure now. Do you know what descriptive word is missing in this line from "Passions?" "I'm sorry that you're ill, I'm sorry you're in pain. I'm sorry that you aren't _____________. But yes, I wish you'd go away and leave me alone!"

Fosca is furious when he sings this line to Clara in the song "Is This What You Call Love?"
8. Do you know the missing word in this ensemble show stopper from "Pacific Overtures?" "It's the ripple, not the sea. Not the building but the beam. Not the garden but the stone. Not the ___________ house, someone in a tree."

This is one of my favorite Sondheim songs - "Someone in a Tree." In it, several witnesses recollect the events at the treaty house as observed while hiding in a tree or under the floorboards.
9. Now back to something more well known. Can you remember the funny climactic phrase missing in this lyric from "West Side Story?" "Gee, Officer Krupke, we're down on our knees, 'cause no one wants a fellow with a _____________."

This line is from the song "Gee, Officer Krupke!" Earlier in the song the "head shrinker" says that, "Juvenile delinquency is purely a social disease."
10. Finally, let's end with something much more obscure. This is one of my favorite lyrics of all time, from a song originally written for "Follies," but later cut from the show. Can you fill in the missing word? "She sits at the Ritz with her splits of Mumms, and starts to pine for a stein with her ___________ chums, but with a Schlitz in her mitts down at Fitzroy's Bar, she thinks of the Ritz, oh it's so schizo."

This song is called "Uptown, Downtown." It is often performed outside the musical, and is sometimes included in modern productions of "Follies." This lyric is a prime example of Sondheim's skill with internal rhymes.
Source: Author rattiemama 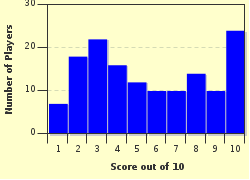 
Other Destinations
Explore Other Quizzes by rattiemama