I love Sondheim...I can never get enough of him, so I don't think anyone else can either. Take this quiz and see if you have the stuff to beat a Sondheim nerd.

Quiz Answer Key and Fun Facts
1. Which of these musicals did Sondheim not provide the lyrics to?

Although he did not write the music, Sondheim did provide the lyrics for Styne's "Gypsy" and Bernstein's "West Side Story." "Passion" is one of Sondheim's lesser-known musicals.
2. In what Sondheim musical can you find out about the "cookies"?


Answer: Anyone Can Whistle

This musical is considered a "successful failure." Although it only played on Broadway for 6 days, it is considered as one of Sondheim's best works.
3. Sondheim's "Sunday in the Park With George" is based on the life of this painter.

Seurant was a painter who pioneered a unique technique based on creating a picture from small dots of color. The musical tells of his work getting in the way of his love and its repercussions through generations.
4. In this song in "Sweeney Todd", the title character decides that "They all deserve to die."

"Sweeney Todd", one of my favorite Sondheim shows, was supposed to be revived with Brian Stokes Mitchell as Todd and Christine Baranski as Mrs. Lovett in 2002. Apparently the plans fell through...I was upset.
5. Bernadette Peters has been a staple in Sondheim's work. Of the following Sondheim musicals, which was the last to have Bernadette as one of its stars?

Bernadette Peters was the witch in "Into the Woods", Dot and Marie in "Sunday...", and appeared as Momma Rose in "Gypsy" on Broadway in March 2003. Bernadette did not appear in "A Little Night Music" until July 2010.
6. Not only is Sondheim a whiz with musicals for the stage, he has also done numerous things for movies and TV. Name the Sondheim TV movie about a hidden society based on the story "Fancies and Goodnights."

Even though this is a TV movie, songs such as "I Remember" are still sung in a common musical theatre repetoire.
7. Elaine Stritch performed the memorable song "The Ladies Who Lunch" in the original production of what Sondheim show?

The wonderful and groundbreaking musical "Company" tried to explore what urban relationships were like in a contemporary society. The score boasts such wonderful songs as "Another Hundred People" and the classic, "Being Alive."
8. Which of Sondheim's shows is performed in backwards order?


Answer: Merrily We Roll Along

"Merrily We Roll Along" has such classic songs as, "Not a day Goes By." It is a wonderful unique show, I wouldn't expect anything else from Sondheim.
9. What is the name of the cow in "Into the Woods"?

In many productions I've seen, the cow steals the scene. The poor thing falls over when fed the ingredients to the potion.
10. In the revival of Sondheim's "A Funny Thing Happened on the Way to the Forum", the role of Pseudolus was given to a female after Nathan Lane left. Who was the female?

Dear God! Just imagine Bea Authur as Pseudolus! It was interesting how they handled the song in the brothel...she just kind of stared and marveled at them. It was great!
Source: Author Queen Michelle 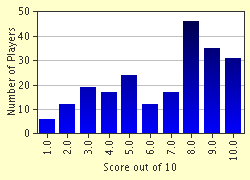 
Other Destinations
Explore Other Quizzes by Queen Michelle