Here's a little fun about Stephen Sondheim's musicals. Hope you have fun with these. They are not too hard.

Quiz Answer Key and Fun Facts
1. 'Being Alive' comes from what Sondheim musical?

These princes are trying to catch up with their princesses of choice.
3. Who played Sweeney Todd, The Demon Barber of Fleet Street in the stage musical "Sweeney Todd"?

Len Cariou won a Tony Award for his portrayal of Sweeney Todd.
4. What was the name of Dot's daughter in "Sunday In The Park with George"?

Dot gets this name from an early reading book as she educated herself to read.
5. What is the name of the ill-fated heroine in the musical "Passion"?

Fosca was the ill-fated heroine with her ghostly appearance and frightful weak spells.
6. With whom did Stephen Sondheim study?

Oscar Hammerstein was best known as a lyricist but actually was a skilled composer.
7. Who played Amy in the original Broadway production of "Company"?

Beth Howland is probably best known for her role of Vera on the TV series "Alice." However, she made 'Crazy Amy' come to life and get cold feet in "Company" first.
8. Who replaced Bernadette Peters as the witch in the Broadway production of 'Into The Woods'?

This lady was best known as playing Bill Cosby's wife in both the 'The Cosby Show' and 'Cosby' and in real life is married to football great Ahmad Rashâd.
9. Who directed both 'Sunday In The Park With George' and 'Into The Woods'?

James Lapine won a Tony for "Into The Woods" but was disappointed when "Sunday In The Park..." failed to garner the best musical honors.
10. Which Star Trek Officer co-starred in 'Sunday In The Park with George'?

Brent Spiner showed his singing talents in one of the "Star Trek" movies by singing a selection from "Pirate of Penzance" with Patrick Stewart.
Source: Author malizma 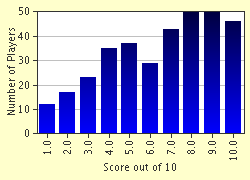 
Other Destinations
Explore Other Quizzes by malizma