Who Ate all the Pies? Trivia Quiz

This quiz is about various sayings including the word pie! Have fun with this quiz!

Quiz Answer Key and Fun Facts
1. There are many common idiomatic pie sayings. What meaning would one convey by using the phrase 'to eat humble pie'?


Answer: One is humiliated for making an error.

The idiom, eat humble pie, indicates that one is to face humiliation for a serious error. Humble pies or umbel pies are of pre-19th century England. These are meat pies that were often made of deer meat. The definition of the phrase refers to behaving humbly or to be humiliated.
2. What is a person implying by using the idiom 'to have one's finger in the pie'?


Answer: A person has a role in something.

She needs to have a finger in the pie. This is an example of someone who would need a role in an activity. To have involvement in something is what this idiomatic saying implies. The similar phrase, to have a finger in too many pies, suggests that one is involved in too many things or that one is too busy to do the task right.
3. When referring to something as pie in the sky, what could this mean?


Answer: Something good is unlikely to happen.

This idiomatic saying is defined as meaning that what is hoped for is not likely to happen. This is an American idiom that was first used in a song by Joe Hill in the year 1911. An example is to refer to a planned meeting, that just does not seem possible, as pie in the sky.
4. One might like to have things in order. What might the phrase 'to be in apple pie order' indicate?


Answer: Things are in a neat and tidy order.

This particular idiomatic saying means that things are in perfect order.
The phrase was used in the year, 1902, by Joseph Conrad in his work 'Heart of Darkness'. The quote is: "He was devoted to his books which were in apple pie order." Apparently, apple pies are of perfect order. This concept was also used in a work by Admiral Sir Thomas Pasley called, "Private Sea Journals" which are for the years 1778-1782.
5. Everyone wants to gain a piece of the pie! When gaining a piece of the pie, what do you obtain?

The similar sayings, as easy as 1,2,3, may have led to this pie saying, as easy as pie. The colloquial idiom indicates that something is both pleasurable and simple, such as pie. The phrase has been interchanged with the saying, piece of cake, which has a similar connotation.

In the year 1910, Zane Grey used the idiom in a book called 'The Young Forester'. Also, a similar saying, like eating pie, was used in the publication 'Sporting Life' in the year 1886.
7. To be as American as apple pie is quite common in USA. What does this pie idiom suggest?


Answer: Something has American characteristics.

A house with a white picket fence at one time might have been considered, as American as apple pie. These were common in America. Therefore, a common characteristic of America, such as the sweet pies of USA, is considered as American as apple pie. At one time, the queen of England suggested that she wanted a pie sweetened like an American pie. Apparently, a difference in pie recipes was present at that time.
8. Her friend called her a sweetie pie. What is the friend saying by using this idiom?


Answer: She is a darling, sweet person.

The friend, in this example, is really trying to call her a honey or darling or sweetheart. Sweetie pie is a term of endearment. This relates to pie being a sweet dessert. A cartoon called 'Sweetie Pie' was originally drawn by Nadine Joy Seltzer for American newspapers. The comic strip was used from the years 1929-2008.
9. When someone is considered as nice as pie, what does this pie idiom imply?


Answer: Someone is unexpectedly friendly.

Usually this idiomatic phrase means that someone is friendlier than one would expect them to be. For example, if you made a mistake and expected to be berated, but the reaction was sympathetic to you, you might say that the person was as nice as pie about the problem.
10. Finally, 'Who ate all the pies?' is the title of this quiz. What could this saying possibly be referring to?


Answer: People are overweight. because of pie eating.

This was a chant used in the year 1894 by fans to chant at a British goal keeper, William (Fatty) Foulke. He was 6'4" and weighed 150 kg/331 lbs. This phrase is used by the British when referring to overweight athletes. In this case, the idea of eating pies relates to weight gain.
Source: Author MyGirl2000 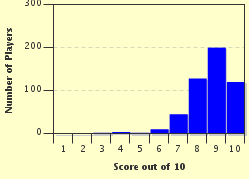 
Other Destinations
Explore Other Quizzes by MyGirl2000