Agatha Christie is known as the Queen of Mystery and Detective Fiction and she's my favourite author! See you much you know. SPOILERS inside!

Quiz Answer Key and Fun Facts
1. Which of these alternate titles has 'And Then There Were None' been known by?

'And Then There Were None' is Agatha Christie's best selling novel!
2. Complete the title: "The Murder of ______ ______ " is a Christie mystery in which we discover that the murderer was actually the narrator of the story.

Many people felt cheated by the twist ending, but now the book is considered a masterpiece of the genre!
3. How did Agatha Christie feel about her character Hercule Poirot?


Answer: She thought he was "an insufferable little creep".

Christie disliked the character of Poirot, but felt it her duty to continue to produce what the public liked - and what they liked was Poirot.
4. Jane Marple appeared in 12 Christie novels.

The first novel featuring Miss Marple is 'The Murder at the Vicarage'.
5. 'Crooked House': choose the correct storyline.


Answer: A wealthy Greek businessman is found dead in his London home, and his young widow is the prime suspect.

The incorrect answers are the storylines of 'Towards Zero', 'Sparkling Cyanide' and 'N or M?'.
6. Tommy and Tuppence solve the mystery in 'Ordeal by Innocence'.

'Ordeal by Innocence' doesn't feature Poirot, Miss Marple or Tommy and Tuppence Beresford.
7. What other title was 'Why Didn't They Ask Evans?' published under?

'Why Didn't They Ask Evans?' was published in 1934.
8. Which character did NOT appear in 'Cards on the Table'?

This was the first appearance of Ariadne Oliver, Poirot's novelist friend, in any of Christie's novels, although she did appear in the book of short stories 'Parker Pyne Investigates'.
9. How many murderers are responsible for Ratchett's death in 'Murder on the Orient Express'?

Of the thirteen suspects on the train, Poirot concludes that only one of them did not take part in the murder.
10. Complete the quotation to provide the title of the Christie novel: "All converging towards a given spot...And then, when the time comes - over the top! Zero Hour. Yes, all of them converging ________ ________."

This line was spoken by Mr Treves, the most famous member of a famous firm of solicitors, in the novel 'Towards Zero'.
Source: Author snufalufagus 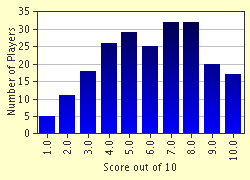 
Other Destinations
Explore Other Quizzes by snufalufagus