Clued up on Christie Mysteries? Quiz

Think you are familiar with all the stories of Agatha Christie? See how much you can remember by guessing the titles of these famous mysteries from the story description...

Quiz Answer Key and Fun Facts
1. A famous film star, Marina Gregg, moves to St Mary Mead with her film director husband. There's much excitement in the village, even more so when an overenthusiastic fan dies after drinking Marina's poisoned cocktail. Miss Marple must solve this mystery, and soon.

Of course, Miss Marple solves this one! Made into a movie starring Elizabeth Taylor, Rock Hudson, Tony Curtis, Edward Fox and Angela Lansbury as Miss Marple.
2. Ten strangers are marooned on an island, stalked by their mysterious 'host', who picks them off one by one, killing them on the basis of a children's nursery rhyme. Who will solve this mystery if no one survives? Classic Christie.


Answer: And Then There Were None

Arguably one of Ms. Christie's finest and most puzzling, the original British title being 'Ten Little Niggers'. It has also been published as 'Ten Little Indians'. As to who solves the mystery after all ten are killed, well, read the book and find out!
3. Miss Marple's friend sees a man strangling a woman on board a train that passes her own ... or does she? No one believes her except Miss Marple, who sends her 'mole' Lucy Eyelesbarrow, in to the Crackenthorpe house, where all the answers seem to lie.

Alternative title: What Mrs McGillicuddy Saw - of COURSE she saw a murder take place, and after more twists, turns and tragedies, Miss Marple and Lucy discover exactly who and what, she saw.
4. Who would want to kill an ordinary charlady? James Bentley is condemned to die after being found guilty of her death. But Superintendent Spence is not convinced of his guilt and calls in Hercule Poirot to get to the bottom of this mystery. More murders follow. Other characters in the book include Eve Carpenter, Deidre Henderson, Robin Upward and the irrepressible Mrs Ariadne Oliver. Guess the name of the book.

What did Mrs McGinty know that was so important? did she recognize someone who desperately wanted to stay incognito? Is there another murder mystery where the murder weapon is a sugar hammer?Hercule Poirot knows it all before the end.
5. Mrs Oliver is called in to organize a Murder Hunt at the garden party of Sir George and Lady Stubbs. She does this with her usual enthusiasm, organizing clues, alibis and a 'body' as well. Only the 'body' of a girl scout ends up being a real body, and the murder of Marlene Tucker brings Hercule Poirot down to the country to investigate and help his old friend.

It turns out that the girl scout knew a lot more about things she shouldn't know or meddle in.
6. A group of people at a beach resort. A beautiful adulterous wife, Arlena Marshall attracts the attention of everyone present, and the anger and jealousy of a few. Soon, she is spectacularly dead - but who could have done it? The ardent lover, the cuckolded husband, the jealous stepdaughter, the rejected wife; Hercule Poirot sets out to find the truth.


Answer: Evil Under the Sun

A truly ingenious story, made into a film starring Peter Ustinov as Hercule Poirot, as well as James Mason, Roddy Macdowell and Diana Rigg.
7. Another murder mystery based on a nursery rhyme brings Miss Marple to Yewtree Lodge, the home of the Fortescues, to investigate the death by stragulation of a simple maid called Gladys. Was it Percival, Lancelot, or simply someone else whodunnit?


Answer: A Pocketful of Rye

There was a King in his counting house, and a Queen in her parlour eating bread and honey, and poor Gladys the maid had a clothespeg attached to her poor dead nose.
8. Who would want to kill Nick Buckley? She was a pretty young girl without a care in the world, except for her lovely old home in Cornwall. Surely not Jim Lazarus, Commander Challenger, Charles Vyse or Frederica Rice? Three failed attempts on her life convince Hercule Poirot that she is in danger...and what then when murder DOES happen.?

Nick Buckley was engaged to the airman who died tragically, Michael Seton, and this was why murder had to happen.
9. Newly married Gwenda Reed settles in a small town in coastal England with her husband Giles on their return from New Zealand. She immediately feels at home on her new house, almost familiar with her surroundings. Then, hearing a line from a Webster play, The Duchess of Malfi makes her realize that the familiarity stems from recognition and memory, memory of a murder committed many years ago in the same house when she was a child. She turns to Miss Marple for help.

Miss Marple's last case.
10. A scenario of murders against a theatrical setting. Stephen Babbington is the first to die while sipping a cocktail, followed by Sir Bartholomew Strange, the best friend of the renowned stage actor, Sir Charles Cartwright. Will he be next? Hercule Poirot can solve the unsolvable. 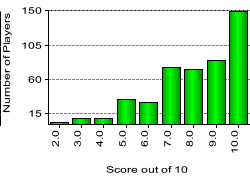 
Other Destinations
Explore Other Quizzes by ruma