Agatha Christie wrote over 80 books in all. Sometimes the murderer (or murderers) is obvious and sometimes they are well hidden. This quiz is about her early full length novels, from 1951 until 1958. Warning - spoilers may be revealed! Enjoy!

Quiz Answer Key and Fun Facts
1. In "They Came to Baghdad", why was Victoria Jones sacked from her office job?

Victoria Jones falls in love with Edward Goring. Mrs Hamilton Clipp is travelling to Baghdad but has broken her arm. So Victoria becomes her nurse. There is going to be a secret meeting between the leaders of the Communist and the capitalist powers.
2. In "Mrs McGinty's Dead", where did Mrs McGinty live?

The other options are also villages in Christie's books. This is also known as "Blood Will Tell". In 1964, it was made into a film, "Murder Most Foul", but Hercule Poirot was replaced with Miss Jane Marple, played by Margaret Rutherford. Superintendent Spence asks Poirot to help clear a man's name, who is in jail, convicted for killing his landlady. Ariadne Oliver also appears in the novel, because another character is converting one of her books into a play.
3. In "They Do It with Mirrors", what nationality was Wally (or Walter) Hudd?

This is also known as "Murder with Mirrors". The title comes from how conjurers use sleight of hand to deceive their audiences. Miss Marple has two good friends, who are sisters. Carrie Louise has been married three times, and is now married to Lewis Serracold.

They are running a reform school for delinquent boys. Ruth, who lives in America, fears that Carrie is being poisoned, so Miss Marple goes to Stoneygates to stay.
4. In "After the Funeral", how was Cora Lansquenet killed?


Answer: Blow to the head

This is also known as "Funerals are Fatal", and was adapted into a film - "Murder at the Gallop" - in 1963. Again, Poirot is replaced by Miss Marple, played by Margaret Rutherford. Cora believes that her brother was killed, and states it, while his will is read out. Soon after Cora is found dead.
5. In "A Pocketful of Rye", what was Gladys Martin strangled with?

This story is loosely based on the traditional nursery rhyme "Sing a Song of Sixpence". Gladys Martin was Miss Marple's old maid, who came to work for the Fortescue family. Her boyfriend told her to put taxine in Rex Fortescue's marmalade. Although the murderer seems to have got away with it, Gladys wrote to Miss Marple, with evidence, before she died.
6. In "Destination Unknown", where is the novel set?

This is an espionage case, as well as several promising scientists vanishing. Hilary Craven plans to commit suicide, but someone asks her to impersonate someone else and helping her country.
7. In "Hickory Dickory Dock", what colour ink was poured over Elizabeth Johnston's study notes?

This is also known as "Hickory Dickory Death". Poirot is first aware that something is wrong, when his reliable secretary, Miss Lemon, makes three mistakes in a letter. Miss Leon's sister - Mrs Hubbard - is manager of a youth hostel, and some petty thefts have been happening. Three murders happen in this book.
8. In "Dead Man's Folly", how is Marlene Tucker killed?

Ariadne Oliver makes an appearance in this novel. She has been asked to organise a murder hunt at a fete, held by Sir George Stubbs. But Ariadne feels that something is wrong at Nasse House, and asks Poirot to come to Devon. Sure enough, during the murder hunt, the mock murder victim is really murdered.
9. In "4:50 from Paddington", where did Lucy Eylesbarrow find a dead body?

This book is also known as "What Mrs McGillicuddy Saw!" and was made into the film, "Murder She Said", with Margaret Rutherford, in 1962. When there is a murder, but no body, Miss Marple sends Lucy Eylesbarrow - a woman who can turn her hand to anything - to become a maid at nearby Rutherford Hall, to see what she can find out.
10. In "Ordeal by Innocence", what is the name of the Argyles's home?

Sunny Point used to be called Viper's Point. Rachel Argyle was a very kind woman, who adopted several children, and also was devoted to them. She could not have any children of her own. A year before the story begins, Jack (or Jacko) Argyle was convicted of murdering his mother, and later died of pneumonia in prison. Doctor Arthur Calgary, an explorer, says that he was with Jack on the night Rachel died, and the case is reopened.
Source: Author JaneMarple 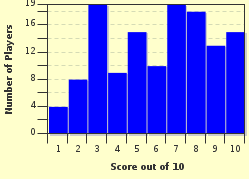