Agatha Christie wrote over 80 books in all. Sometimes the murderers are obvious and sometimes they are well hidden. This quiz is about her early full length novels, from 1931 until 1936. Warning - spoilers may be revealed! Enjoy!

Quiz Answer Key and Fun Facts
1. In "The Sittaford Mystery", what sport did Major Burnaby and Captain Trevelyan do in their youth?

Agatha incorporates the supernatural into this story. It takes place on a winter evening when, during some table-turning game, the spirits tell the gathering that Captain Trevelyan has been murdered. It is also known as "Murder at Hazelmere". The main detective is young Emily Trefusis, whose fiancé is suspected of murdering his uncle, the Captain.
2. In "Peril at End House", what nationality are Mr and Mrs Croft?

Poirot and Captain Hastings are holidaying in the south of England and investigate a murder which was committed, thinking the victim was someone else. The story also involves drug smuggling.
3. In "Lord Edgeware Dies", what was Lord Edgeware hoping to buy in Paris?

This is also known as "Thirteen at Dinner". Jane Wilkinson is a well known actress and hopes to marry the Duke of Merton. However, she is still married to Lord Edgeware, and he refuses to grant her a divorce. Jane asks Poirot and Hastings to try and persuade her estranged husband to divorce her. Lord Edgeware is a little confused, as he had written to his wife, saying he would divorce her, some time ago. Shortly after, Lord Edgeware is found stabbed to death ...
4. In "The Murder on the Orient Express", what does Mrs Hubbard find in her sponge bag?

This is another very well known Poirot mystery, Poirot is travelling on the Orient Express when it becomes snowbound. Things get even more complicated when someone is stabbed to death, and only those on the train could have done it.
5. In "Why Didn't They Ask Evans?", where is the village of Marchbolt?

This book is also known as "The Boomerang Clue". The two investigators in this case are Bobby Jones, the local vicar's son, and Lady Frances Derwent - better known as Frankie. They are very similar characters to Tommy and Tuppence Beresford. Bobby is playing golf - badly - when he comes across a dead body at the bottom of a cliff. Their dying words are the title of the book.
6. In "Three Act Tragedy", what sort of sport is Captain Dacres connected with?

This book is also known as "Murder in Three Acts". Instead of Captain Hastings, Poirot is assisted by the elderly Mr Satterthwaite, who usually works with the mysterious Mr Harley Quin. A vicar dies at a house party, and Poirot can not help but investigate.
7. In "Death in the Clouds", what sort of poison killed Madame Giselle?

This book is also known as "Death in the Air". Boomslang is really snake venom. An unpopular moneylender is murdered while on an aeroplane.
8. In "The ABC Murders", what item of clothing connects all three murders?

This is also known as "The Alphabet Murders". Captain Hastings reappears in this novel and assists Poirot. The book is a mixture of Captain Hastings narrative and of another character's point of view. Poirot receives anonymous letters from someone who boasts that a murder will be committed on a certain day in a certain place. Poirot has to find who the murderer is before they get too far through the alphabet.
9. In "Murder in Mesopotamia", which river is nearby?

Agatha Christie's second husband, Sir Max Mallowan, was an archaeologist, and Agatha often went on digs with him. This book is set on an archaeological dig, in the Middle East. The narrator is Nurse Amy Leatheran, who is asked to take care of Louise Leidner. Mrs Leidner is later murdered. Nurse Leatheran assists Hercule Poirot.
10. In "Cards on the Table", who makes their first appearance in a full length novel?

Chief Inspector Japp had appeared in several Poirot mysteries before this one, while Mr Quin and Mr Parker Pyne have never appeared in a full length novel, only in short stories. Mr Shaitana invites four criminal experts and four people who may or may not be murderers, to a bridge evening. The plan backfires when he is stabbed to death. As well as Mrs Oliver, Shiatana invited Hercule Poirot, Colonel Race and Superintendent Battle. Mrs Oliver has also appeared in short stories with Mr Parker Pyne.
Source: Author JaneMarple 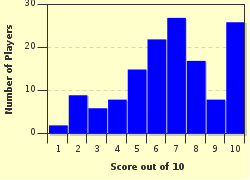