In this quiz we continue to journey with Alice in Wonderland, discovering some of the wackiest creatures ever set down in print. Curious? Play me.

Quiz Answer Key and Fun Facts
1. Having escaped her latest growth spurt in the house of W. Rabbit, Alice wonders amongst the grass and flowers. Suddenly, she happens upon a caterpillar with a long hookah. What is this 'hookah'?

This lengthy blue caterpillar sits atop a rather large mushroom smoking its hookah, a water pipe with a long tube that draws smoke through a water bowl. This cheeky caterpillar gives Alice quite a hard time, but ultimately proves to be able to provide the young lady with some useful advice.
2. One of the best poems from the story is recited by Alice in the caterpillar chapter. Who is this poem about?

The first two verses of this madcap poem read:

"You are old, father William," the young man said,
"And your hair has become very white;
And yet you incessantly stand on your head--
Do you think, at your age, it is right?"

"In my youth," father William replied to his son,
"I feared it might injure the brain;
But now that I'm perfectly sure I have none,
Why, I do it again and again."

Magnificent!
3. Alice has discovered, through the help of the caterpillar, that she can eat parts of the mushroom upon which it sits, utilizing this method to adjust her body size. After eating a bit of the mushroom, she finds her neck has elongated to a point where she is above the trees. What sort of creature does a local pigeon mistake Alice for?

The pigeon is frightened of Alice, believing her to be a serpent that is after its eggs. Alice seems to confirm her serpenthood to the pigeon by exclaiming that she has a taste for eggs.
4. Soon, Alice finds herself at the residence of a certain local Duchess. She witnesses the exchange of an invitation from the Queen to the Duchess via two footmen. The two footmen have heads shaped like which two animals?


Answer: A frog and a fish

The fish footman, servant of the Queen, hands a gigantic letter to the frog footman, in the service of the Duchess. The letter contains an invitation from the Queen to the Duchess to play croquet.
5. Inside the Duchess's home, Alice discovers the Duchess cradling a baby. Nearby is a cook preparing a soup that apparently contains a bit too much of which condiment?

So much pepper has gone in the soup that it infiltrates the air within the Duchess's home. Everyone, including the Duchess, is sneezing, her baby most of all.
6. Much to the chagrin of Alice, the Duchess suddenly foists her offspring on the young girl. After nursing the child for a short while, Alice notices that the infant has turned into which type of animal?

Alice observes as the child is slowly tranformed into a pig. Once the metamorphosis is complete, she releases the beast into a nearby wood. 'If it had grown up,' says Alice, 'it would have made a dreadfully ugly child; but it makes rather a handsome pig, I think.'
7. Alice encounters one of Lewis Carroll's most beloved creations in a large tree, namely the Cheshire-Cat. Is this the first time Alice has seen this grinning feline?

In fact, Alice has just encountered the Cheshire-Cat in the Duchess's home. The Cheshire-Cat informs Alice that everyone in Wonderland is mad, and also gives her directions to the homes of both the Mad Hatter and the March Hare.
8. The last part of the Cheshire-Cat that Alice sees is his big, bushy tail.

The Cheshire-Cat disappears from the tail up, with the last remaining vestige being its enormous grin. Oddly enough, despite the talk of 'madness' from the Cheshire-Cat, it is in fact one of the only creatures that talks some sense in Wonderland.
9. Alice next encounters a mad tea party. The tea party occurs on a table set out under a tree right in front of the March Hare's home.

For no particular reason, Alice has chosen to saunter towards the home of the March Hare. At first sight of the bizarre house with chimneys shaped like rabbit ears, Alice remarks, 'Suppose it should be raving mad after all! I almost wish I'd gone to see the Hatter instead!'
10. Aside from the Mad Hatter and the March Hare, who also joins Alice at this mad tea party?

Yes, the famed narcoleptic dormouse (something like a cross between a mouse and a squirrel). The dormouse sits in between the March Hare and the Mad Hatter, quite oblivious to the bizarrerie occurring under its very nose.

Thank you for joining me, intrepid traveler, I hope you have enjoyed this quiz. Please feel free to try quiz three, or go back and try one if need be.
Source: Author thejazzkickazz 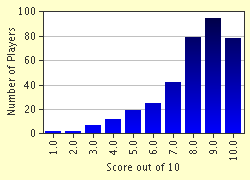