Lewis Carroll was an extraordinary person under his mundane exterior!

Dodgson got his pen name by transposing and Latinizing his first two names.
2. What were his vocations?

He was deacon and math teacher at Oxford.
3. What disorders did Carroll suffer from?

Along with shyness, it was his stammer and deafness in one ear that ruled out public speaking for Carroll; he never took Holy Orders in any case. Epilepsy and ADHD also plagued him throughout his life.
4. What was Carroll's hobby?

Carroll was a gifted amateur {photographer;} however, some of his pictures of little girls were controversial and eventually he gave it up.
5. Which of Carroll's living cards in "Wonderland" is always yelling, 'Off with his head!'?

One of the most memorable characters from the 'Alice' books. Earlier, the Duchess says, "Speaking of axes, Cook, cut off her head!" But she later sweetens on next meeting Alice. The Queen stays explosive and nasty throughout.
6. Which character has the ability to vanish?

The picture of the Cheshire Cat fading, leaving only his grin, is one of the great scenes in the book.
7. What is the name of Alice's kitten in the first book?

Dinah was her kitten.
8. What game did Carroll base his sequel, 'Through The Looking-Glass' on?

Not only did the others appear in 'Looking Glass', but they came from nursery rhymes, while Rumplestiltskin is a fairy tale character.
10. Name the best known poem from 'Looking Glass'

Deciphering all the meaning behind those portmanteau words has become a cottage industry!
11. Who was the first illustrator of the 'Alice' books?

Believe it or not, Carroll himself illustrated the first handwritten copy of his 'Alice' story(in fact, he often did his own drawings for his stories).
12. Who never illustrated Carroll's works?

Denslow is best known for illustrating 'The Wizard of Oz'.
13. Which poem of Carroll's includes a beaver among its characters?


Answer: The Hunting of the Snark

Jack London named his sloop after Carroll's never-seen title character(like Daphne DuMaurier's Rebecca!)
14. What is the inscription on the Mad Hatter's hat?

Interestingly, hatters went 'mad' because of mercury poisoning from the treatment of rabbit fur for the hats.
15. What is the Mock Turtle's song?

It was a parody of the song 'Beautiful Star'.
16. And the seaside dance?

Joseph Cornell did one of his collage-boxes on the subject.
17. Who ate the oysters?


Answer: The Walrus and the Carpenter

Dee and Dum were the ones who narrated the poem about those oyster-eaters, actually!
18. Which rule of the King of Heart's forbade 'any person over a mile high to enter the court'?

The number 42 pops up in many of Carroll's writings.
19. Who are the messengers in 'Looking Glass'?

They are called Hatta and Haigha in the book, perhaps indirectly alluding to the Mad Hatter and March Hare in the first book, though it's not certain Carroll really did return them to the sequel. The Tenniel illustrations, though, do depict the Hatter and Hare in costume, so perhaps Tenniel assumed they were written in!
20. Which novel took its title from 'Looking Glass'?

Angus Wilson got his title from the 'Anglo-Saxon Attitudes' of Carroll's messengers.
21. Which country did Carroll visit?

And wrote a book about it.
22. True or false: Carroll named Alice for a real person.

Alice Pleasance Liddell, the daughter of a fellow cleric and a favorite of his.
23. When did Carroll first tell his Alice story?

While Americans celebrated Independence Day...
24. What was the event where Carroll first told the story?

It was on a boating picnic on the Isis branch of the Thames with the Liddells that Carroll first told the story of Alice.
25. What book was not written by Carroll?


Answer: The Sword in the Stone

'Sword' was written by T. H. White, whose works were the basis for the Disney cartoon and the hit musical 'Camelot'. (The Arthurian myth, though, was long in existence before these versions came out)
Source: Author tjoebigham 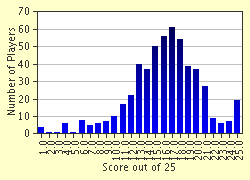