Alice's Adventures in Wonderland I Quiz

Whether one views this as madcap fantasy, surreal horror or clever satire, one cannot deny the literary power of Lewis Carroll's great classic 'Alice's Adventures in Wonderland'. This quiz deals with the first several chapters...good luck!

Quiz Answer Key and Fun Facts
1. What sort of neurotic talking animal does Alice follow into a seemingly endless hole in the opening chapter of 'Alice's Adventures in Wonderland'?

A tiny white rabbit dressed in a sharp-looking waistcoat and sporting a pocket watch is the creature that lures Alice into a the myserious hole that leads to Wonderland. Soon, Alice finds herself in freefall with enough time to contemplate many things, and to converse with herself unhurriedly.
2. Alice mentions her beloved cat several times throughout this book. What is the name of her feline pet?

Alice concerns herself with Dinah as she falls down the rabbit-hole. Later, when Alice mentions Dinah and her predilection for eating birds (among other things), the various animals in Wonderland are either extremely offended or utterly frightened.
3. After falling down the hole, Alice finds herself in a hall with many doors. Contained within this hall is a small three-legged table upon which may be found a single item. What is this item?

Alice attempts to use this key to open the various doors in the hall but is thwarted in each attempt, the key is either overly large or rather too small. Frustrated, she returns to the table only to find that a bottle reading 'DRINK ME' has appeared. Naturally, Alice drinks the water, shrinking posthaste.
4. Under the table, in a little glass box on the floor of that same hall, Alice finds a piece of cake with which two words fashioned from currants?

After having had a drink of the potion upon the table, Alice is now very small. Before proceeding to eat the cake, Alice suggests to herself that she leave at once. This leads to one of the great lines from the book: 'She generally gave herself very good advice (though she very seldom followed it)'.
5. After shrinking rapidly and then growing to an enormous height, Alice becomes rather discombobulated, imagining herself to be someone different. Alice suggests that she has become which girl who 'knows such a very little'?

'Who in the world am I?' wonders Alice. At first, she can't imagine herself being the ignorant Mabel, but after quizzing herself (examples: 'Four times five is twelve' and 'London is the capital of Paris') a bit, she feels that it's entirely possible. This provokes Alice to tears, flooding the small room in which she is trapped.
6. Again having shrunk to a miniscule size, Alice finds herself swimming in an ocean of her own tears. Which creature does Alice first encounter while treading this salt water sea?

Alice offends this mouse with references to Dinah, her cat. However, the tiny rodent eventually allows Alice to follow her to shore where a small group of animals, including a dodo, a lory and an eaglet, awaits.
7. Arriving on shore, Alice finds herself among a small group of various animals who soon involve themselves in a 'Caucus-race'. Who wins this chaotic competition?

The so-called 'Caucus-race' is really just a random rumpus where participants raucously run about. The Dodo, who seems to be in command of this menagerie, suddenly declares the race over after half an hour, declaring that 'Everybody has won, and all must have prizes'.
8. A box of comfits is provided to the victor(s) of the race, but Alice herself is not afforded this prize. The animals insist that Alice receive some compensatory prize (after all, she provided the comfits), so what does she get?

Oddly enough, not only does Alice provide the box of comfits, she also donates the very 'elegant' thimble that is then solemnly awarded back to her in an absurd ceremony.
9. Alice is directed to the home of a certain W. Rabbit to fetch a particular clothing item. Which item would this be?

The white rabbit insists that Alice retrieve a pair of gloves and a fan from his housemaid, a certain Mary Ann (for whom Alice has been mistaken). Alice finds herself in the rabbit's home, soon growing out of control after once again taking a drink of a mysterious elixir.
10. What is the name of the poor lizard who attempts to enter the rabbit's home (where Alice is located) through the chimney to see what is amiss inside?

Bill the lizard is one of the many unfortunate victims of Lewis Carroll's endlessly demented imagination in this book (though, happily, Bill is not killed, but rather simply booted out of the chimney most unceremoniously).

I hope you have enjoyed reminiscing with me this wonderful book and that you will join me for part two of this quiz. Thank you for playing.
Source: Author thejazzkickazz 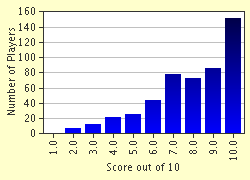