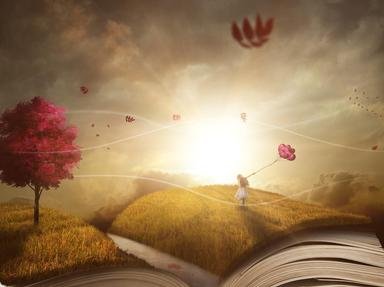 This quiz goes back to the roots of the original fairy tales. No Disney cheat sheets will work here.

"Sleeping Beauty" became better known after it was published in 1697 by Charles Perrault in a collection of stories, "Contes de ma Mčre l'Oye" ("Mother Goose Tales"). Perrault's version is one most known, yet an older variation called "Sun, Moon and Talia" was published in 1634 by Giambattista Basile.
3. In the original fairy tale the prince renames Thumbelina to what name?

The prince met Thumbelina when the bird who rescued her dropped her in a field of flowers. The flower Thumbelina choose was occupied by the prince, and when he saw her it was love. He said "Thumbelina" was not a name beautiful enough for a princess and renamed her "Maia".
4. What did Hansel and Gretel leave as a trail, in order to find their way home on the second time?

This tale is German in origin, and was first published by the Brothers Grimm in 1812. It is about two young children who are taken into the wilderness by their father and left to die. They discover a witch's cottage, and the witch takes them in with the intent of eating them.

They defeat the witch by burning her in her own fire. Gruesome stuff, yet most people know all about Hansel and Gretel. In fact, "Hansel and Gretel" was the clue Will Smith used in solving his case in the movie "I, Robot".
5. What is the literal meaning of the name "Rumplestiltskin"?

"Little rattle stilt" is the correct answer, being that a Rattle Stilt is a type of goblin.
6. What color was the apple that the evil stepmother/witch gave Snow White to eat?

White AND Red. The last trick the Queen created was a poisoned apple, and in the disguise of a countrywoman offered it to Snow White. Snow White was hesitant, so the Queen cut the apple in half, ate the white part - which had no poison - and gave the poisoned red part to Snow White.

She ate the apple eagerly and immediately fell into a deep stupor. When the dwarfs found her, they could not revive her, so they placed her in a glass coffin, thinking that she had died.
7. Who published the original "Rapunzel" fairy tale?

"Rapunzel" was one of the original Grimm fairy tales, and unlike some of the Grimm Brother tales this one ended happily. The imperiled princess is a popular theme in many fairy tales.
8. In the tale of "Three Billy Goats Gruff", what lives under the bridge the goats must cross?

"Three Billy Goats Gruff" originated from Norway. Another perspective is that the protagonist is the troll, and that the moral is to accept a good deal, rather than to wait for a better one.
9. What were the names of the Three Little Pigs?

A number of versions have given names to the pigs (Andrew Lang's version is possibly the most familiar, with Browny, Whitey and Blacky pitting their wits against a fox rather than a wolf), but they are nameless in the earliest versions. "The Three Little Pigs" have been parodied and satirized in countless versions over the years.

A personal favorite is the version from Shelley Duvall's "Faerie Tale Theatre", with Billy Crystal as Larry the pig, the sweet runt of the litter who was wise enough to build a brick house.

There is also Jon Scieska's book, "The True Story of the 3 Pigs", which is the wolf's point of view.
10. Who published "The Little Mermaid"?

Hans Christian Andersen, one of the most beloved storytellers, wrote many familiar stories such as "Princess and the Pea" and "The Ugly Duckling". He is honored with a statue of the Little Mermaid in the Copenhagen harbor, his hometown. Jeanette Hassenplug is one of the storytellers that influenced the Grimm Brothers writing of "Red Riding Hood". And Charles Dickens? Hans Christian Anderson was a houseguest of his (after five weeks, an unwelcome one).
11. "Beauty and the Beast" hails from what country?

French writer Madame Gabrielle-Suzanne de Villeneuve penned the tale in 1740. tale. Her tale was novella in length, and the prime audience was adults. The underlying theme was a protest of how few rights women had, particularly when it came to marriage.

Some sixteen years later, the novella was toned down by Mme Leprince de Beaumont, who published the new version in a magazine for well-bred young ladies. This is the version we are most acquainted with today.
12. "Jack and the Beanstalk" is a well-known and popular tale of a young man who must deal with a giant at the end of a beanstalk. The giant usually said the following when a human was nearby: "Fee! Fie! Foe! Fum! I smell the blood of an Englishman." What was the second part of his saying?


Answer: Be he 'live, or be he dead, I'll grind his bones for my bread.

The origin of "Jack and the Beanstalk" is unknown, although it is thought the story originated in Britain or Germany. The earliest printed edition that has survived is dated 1807. The Mickey Mouse version a la Disney is a fun one to watch, especially the food scene with Goofy.
13. How did the frog turn into a prince in the original telling of the Grimm Brothers' "Frog Prince"?


Answer: the princess throws him against the wall in disgust

The frog rescued the golden ball that belonged to the princess, and in return she had to take him home with her. She was disgusted by the frog and eventually in a fit of temper she threw him against the wall. Kissing him is a lot less violent, yet as the saying goes, "You have to kiss a lot of frogs before you find your handsome prince". King Harold, we discover in "Shrek 2", admits to being the Frog Prince, and in "Shrek 3", he croaks--literally.
14. In the Norwegian fairy tale "The Princess on the Glass Hill" (or the Glass Mountain), what three objects does the princess hold?

"The Princess on the Glass Hill" is also known as "The Princess on the Glass Mountain". The youngest son, who is teased cruelly by his older brothers succeeds where others failed by collecting all three of the golden apples. He redeemed the apples for the princess, and he got half of her father's kingdom as well.
15. Pinocchio, from the Italian fairy tale by Carlo Collodi, does not appreciate the advice of the talking cricket. What does he do to the cricket to get him to stop giving him unwanted advice?


Answer: throws a hammer at him

Collodi's "Pinocchio" is much more of a rascal than Disney's version. He is a liar, as we all know, a runaway, and on top of that, he is a cricket killer. He does not appreciate the sage advice the talking cricket gives him and throws a hammer at it, which kills the insect. Pinocchio is not so easily rid of the conscientious bug, which is a good thing for Pinocchio, who gets into all sorts of situations.
Source: Author shs05 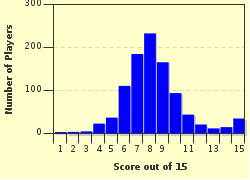 Related Quizzes
1. Match Up Fairy Tale Characters Easier
2. Once Upon A Time, There Was A... Easier
3. Fables II: Aesop's Supposed Tales Very Difficult
4. Religious Subjects in Fairytales Average
5. Italo Calvino's 'Italian Folktales' Tough
6. Which Prince is Prince Charming? Average
7. What's the Right Fairytale? Very Easy
8. What Do You Know About Fairies? Difficult
9. Disney Fairy Tales Vs. Classic Faery Tales Difficult
10. They're at the Post! Average
11. Rumpelstiltskin Mania Average
12. What We Learned Not to Do from Fairy Tales Difficult


Other Destinations
Explore Other Quizzes by shs05