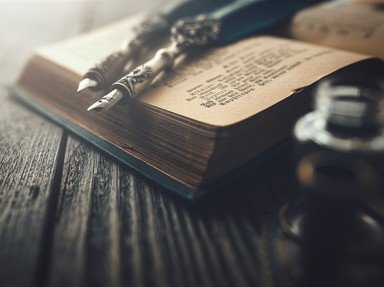 Here's a quiz about the life and work of John Milton. For a few questions it may be useful to have read at least parts of 'Paradise Lost'. Good luck.

Quiz Answer Key and Fun Facts
1. True or False? Milton was a royalist.

Although Milton enjoyed the company of some aristocrats and his brother, Christopher, fought on the royalist side, he was allied with the Puritan cause. He went as far as writing defenses of the execution of Charles I and the new republic. He also served as Latin Secretary to the Commonwealth Government (1649-1653) and to Oliver Cromwell's Protectorate (1654-1658).
2. What is the name of the great epic about the battle between God and Satan and the history of man, that is considered to be Milton's absolute masterpiece?

If you didn't get this one right, I'm afraid this isn't your kind of quiz.
3. What was the name of Milton's first wife, whom he married in 1641, and who left him a few months after the marriage, and returned to him in 1645, but died in childbirth in 1652?

Katherine Woodcock was Milton's second wife, Anna Hathaway was Shakespeare's spouse and Emily Sellwood was married to Alfred, Lord Tennyson.
4. How old was Milton when he wrote 'On the Morning of Christ's Nativity'?

The ode was written on Christmas 1629, a few weeks after Milton's twenty-first birthday.
5. Which of the following works was NOT written by John Milton?

'Absolom and Achitophel' was written by John Dryden.
6. In 1634 Milton wrote a masque. What's the name of that masque?

Both 'Lycidas' and 'Il Penseroso' were written by Milton, but they were poems, not masques. 'The Masque of Blackness' was written by Ben Jonson. A masque is an elaborate court entertainment that combines poetic drama, music, song, dance, and splendid costumes and settings. It was very popular at court in the 17th century.
7. What kind of work was 'Areopagitica'?

'Areopagitica' is the most literary of Milton's tracts. It sets forth a trenchant defense of intellectual liberty. His target is the Press Ordinance of June 14, 1643, Parliament's attempt to crack down on the flood of pamphlets that poured forth both from legal and from underground presses as the civil war raged. (This information was taken from the 'Norton Anthology of English Literature')
8. Can you fill in the missing word from the famous opening line of 'Paradise Lost': 'Of man's first ...... , and the fruit Of that forbidden tree,'

9. 'Paradise Lost' tells the story of Adam and Eve. The poem is divided in 12 'books'. In what 'book' does Eve finally eat the apple that 'brought death into the world, and all our woe'?

In 'book 9', lines 780-784, we can read: 'So saying, her rash hand in evil hour Forth reaching to the fruit, she plucked, she eat. Earth felt the wound, and all her works gave signs of woe, That all was lost'.
10. 'Book 1' of 'Paradise Lost' presents Satan with his angels fallen into Hell. When recovered, Satan awakens all his legions and speaks to them. The first he adresses is described as 'one next to himself in power, and next in crime, long after known in palestine'. What's the name of this fallen angel?

Beelzebub, or Baal, is called the prince of devils in Matthew 12.24. As with the other fallen angels, his angelic name has been obliterated, and he is now called by the name he will bear as a pagan deity.
11. This poet joined Milton, at Milton's request, in the post of Latin secretary to Cromwell's Council of State, and helped his friend Milton avoid execution for his revolutionary polemics, and helped negotiate Milton's release from a brief imprisonment. He also wrote a brilliant poem of criticism and interpretation on Milton's 'Paradise Lost' that was used as preface to the second edition. Who was this poet?

Of course, Andrew Marvell was a great poet in his own right, not just a friend of John Milton.
12. In 1652 Milton became an invalid. Did he become blind or deaf?

He was entirely dependent on friends to transcribe his dictation.
13. At the end of his life, Milton wrote a follow-up to 'Paradise Lost', a brief epic in four books that treats Jesus' temptation in the wilderness. What is the name of this follow-up?

14. How many women did John Milton Marry?

Mary Powell from 1641 to 1652, Katherine Woodcock from 1656 to 1658 and in 1663 he married Elizabeth Minshull, who survived him.
15. In 'Paradise Lost', which angel is ordered by God to drive Adam and Eve out of Paradise? Before he does so, he shows Adam a number of visions about the future of the human race, beginning with Cain murdering Abel and ending with the redemption of mankind through Christ. Who is this angel that has a large role in the finishing chapters of 'Paradise Lost'? 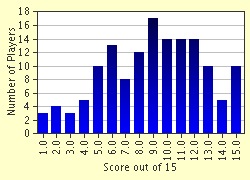 Related Quizzes
1. A Survey of the Works of John Milton Average
2. Paradise Lost Tough
3. The Life Of John Milton Tough


Other Destinations
Explore Other Quizzes by marienbart