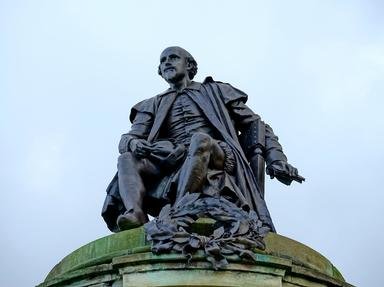 Let's look through a photo diary of the great and evil "Richard III" of Shakespeare's vicious tragic history. Answer these questions about the play - with these visual aids.

Quiz Answer Key and Fun Facts
1. This play is indeed the "Tragedy of King Richard III", as shown here in this lovely intro page from a printing in 1597, but what is the title character's noble title for most of the play's action?

"Richard III" is only the king starting in the middle of Act IV! He starts out as King Edward's younger brother and Duke of Gloucester, a title which he maintains until he leverages his position to the kingship. The house that this family is from is indeed the York line, but he is not the Duke of York at this time.
2. Thomas Keene was a great actor of this role, as shown by this poster for the play from 1884. The top right image shows Richard kneeling before a woman and giving her his sword to kill him! Who is this woman, who is far too baffled to take her chance to kill the crooked king?

Lady Anne is the daughter of the Earl of Warwick, and formerly married to Henry VI's son. She is tormented by her husband, father, and father-in-law's deaths, for which she blames Richard. However, when he passionately begs for death by her hand, she is won over by his "penitence".
3. This engraving from 1780 shows a character from "Richard III" tormented by a dream where he thought he was drowning and then dead in hell. Which character, tormented by a specific act of betrayal, has this tortured dream while imprisoned in the tower?

The Duke of Clarence, the middle brother between King Edward IV and our title character Richard, is imprisoned by the king, and has a torturous nightmare where he imagines his own death and damnation for his past crimes. His major crime was a betrayal in the civil war, where he abandoned his father-in-law Warwick to fight for his brother Edward again, despite swearing off his brother rather seriously.
4. In this image, we see an event from the backstory of this play. The dead young man is a former prince of England, and the woman is a major character in "Richard III". Who is this former queen whose son's and husband's deaths drive her to curse those who have the current power?

Queen Margaret of Anjou, the wife of Henry VI, is here depicted lamenting her son's death at a prior battle. During "Richard III" she is an avenger, constantly praying for the downfall of the people who took the kingdom from her and her family.
5. Richard's most famous crime is committed against the two young characters pictured here from a painting done in 1793 - who are they, though?


Answer: The Prince of Wales and Duke of York

This image introduces us to the Edward, Prince of Wales and Richard, Duke of York, the young sons of King Edward IV. When Edward IV dies, his son Edward the Prince of Wales becomes Edward V, but sadly does not live to his coronation in the play.
6. These two young characters, in another painting by James Northcote in 1791, are being killed by a cruel murderer. Which character is this, brought in by Richard to do his dirty work?

Tyrrell is a greedy, hateful person whose corrupt nature makes him a perfect choice for Richard's cruel plan. Richard is not able to trust anyone else with this particular plan, because even his ally Buckingham is not entirely on board with the plan of killing these children.
7. This woman, shown in a portrait from the sixteenth century, was Richard's niece and target of his affections later in the play. Who is this woman, who would be very advantageous to marry?

Elizabeth of York is Edward IV's and Queen Elizabeth's daughter, and Richard spends a good deal of time trying to convince the queen to let him marry the girl. However, Elizabeth turns her eye elsewhere for her daughter's hand.
8. This painting by William Hogarth from 1745 depicts David Garrick as King Richard the night before his major climactic battle scene. He has just been visited by the spirits of the people he has killed throughout his reign of terror - which is NOT a ghost who appears?

Richard's father is not one of his victims, and indeed if you look to the prequel you can find many examples of Richard respecting and honestly following his father. He only seems to go "bad" after his father's death, which hits him very hard. However, he did kill his brother Clarence, his nephews, and his wife, Lady Anne.
9. This 1912 movie poster of "Richard III" depicts the climactic final battle - which battle was this, again?

Bosworth Field is where Richard's tragedy concludes, and he is defeated by the prophesied new king who will usher in the united dynasty, ending the strife between the York and Lancaster branches.
10. The aftermath of the battle, as depicted here by Richard Caton Woodville in the 19th century, shows which new king being crowned? During the play, he was known as the Earl of Richmond.

Henry VII was the beginning of the Tudor dynasty, and united his Lancastrian heritage with Elizabeth York to create the joint dynasty as opposed to continuing the war between the two branches of the old Plantagenet line.
Source: Author merylfederman