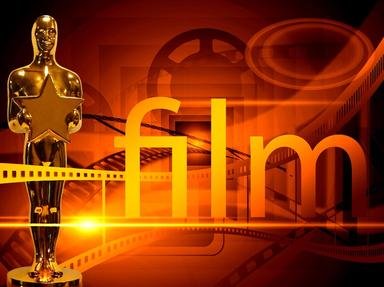 A Night of Stars Trivia Quiz

Walking down me, the red carpet, tonight are actors and actresses from 10 different Best Picture winners, but, being a carpet, I don't actually know which films they're from. I'm sure you'll be able to identify them, right?

Quiz Answer Key and Fun Facts
1. I can see Clark Gable and Vivien Leigh talking over there. I think it's about losing something because of the weather. Oh, Olivia de Havilland has joined them. What winning film from 1939 are they all from?


Answer: Gone With The Wind

Based on the Margaret Mitchell book of the same name, 'Gone With The Wind' was a huge success in 1939, and it won many Academy Awards in 1940, including the awards for Best Picture, Best Director, Best Actress, Best Film Editing, and Best Art Direction, among others. Vivien Leigh, of course, plays Scarlett O'Hara and Clark Gable recites that world famous "Frankly, my dear..." line as Rhett Butler.

The film takes place during and after the American Civil War, and follows Scarlett O'Hara's struggle to get herself out of the poor financial condition she finds herself in as a result of the war. With a running time of over three and a half hours, 'Gone With The Wind' is considered one the landmark films of American cinematography.
2. Natalie Wood and Richard Beymer are walking down me towards a fleet of flashing cameras, with Stephen Sondheim behind them furiously scribbling on a bit of paper, no doubt writing more lyrics. I can't quite hear what they're saying, but from what I can make out, they're in a tale about a cardinal point. That can't be right - what Oscar-winning film connects them?

It was in 1962 that 'West Side Story' took out no less than 10 Academy Awards, including Best Supporting Actor, Best Supporting Actress, Best Director, Best Original Score and, of course, Best Picture. In the film, Natalie Wood stars alongside Richard Beymer, Rita Moreno, and George Chakiris, the latter two each winning Academy Awards for their supporting roles. 'West Side Story' was adapted from the similarly-named Broadway musical, which was itself based on William Shakespeare's immortal tragedy 'Romeo and Juliet'.

In much the same way that the Montagues and Capulets are feuding families and Romeo Montague falls in love with Juliet Capulet, the Jets and the Sharks are two rival street gangs, with Tony Wycek, a Jet, becomes infatuated with Maria Nunez, the sister of one of the Sharks.
3. Ah, here come Julie Andrews and Christopher Plummer now... with SEVEN children in tow? Wow, I wasn't expecting that. Oh, they're all in the same film. I remember now! The hills are alive with the name of which film?

Julie Andrews stars in 'The Sound of Music' as Maria, a former resident of an Austrian abbey who is sent to the resplendent house of the von Trapp family to act as a governess for the seven children of Austrian naval captain Georg von Trapp, played by Christopher Plummer.

The multiple award-winning film has since become one of the most consistently popular films, and one of Julie Andrews' most memorable roles.
4. Dustin Hoffman and Jon Voight have turned up, getting out of their limousine to shouts that I can only describe as being about herders and 12 in the morning. Still, they're obviously here for a reason, but I just can't remember the film they were in. Can you?

In America, an X-rated film is defined as having extremely explicit content. As such, 'Midnight Cowboy' was unique in the sense that it was the first X-rated film to win an Academy Award, which it received in 1970 for Best Picture, along with Best Adapted Screenplay (from the novel by James Leo Herlihy) and Best Director.

In the film, Joe Buck (Jon Voight) and Enrico Rizzo (Dustin Hoffman) form an unlikely partnership and help each other earn money by stealing and hustling, even as Rizzo's health deteriorates.
5. There's something quite awe-inspring about seeing Al Pacino, Marlon Brando and James Caan walking down the carpet to cheers and applause. I can't quite remember what film they were in together, but I do know it won the Best Picture Oscar in 1973. What is its name?

Marlon Brando, of course, stars as Don Vito Corleone in 'The Godfather', along with Al Pacino and James Caan as his respective sons Michael and Sonny Corleone. The film chronicles, among other things, Michael's transition into the new Don Corleone. The Francis Ford Coppola-directed epic is constantly cited in lists of the best films of all time, and a sequel, 'The Godfather Part II' was released in 1974, which also won the Academy Award for Best Picture. Both films were based on the novel 'The Godfather' by Mario Puzo.
6. Over there, I can see Dustin Hoffman and Meryl Streep talking about their film with some journalists. Unfortunately, I can only catch a few words here and there, like 'divorce', 'custody' and 'breakfast'. Well, they don't make much sense to me, but do you know the film that they were both in?

'Kramer vs. Kramer' tells the story of a couple, Ted and Joanna Kramer (played by Dustin Hoffman and Meryl Streep, respectively) who split up, and Joanna leaves their son, Billy, with Ted, adding the responsibility of raising a child as a single parent to his already stressful workload.

The film won five Academy Awards in 1980 - for Best Picture, Best Director, Best Adapted Screenplay, Best Actor and Best Supporting Actress.
7. Aha! Two living greats have just arrived! Sir Ben Kingsley and Richard Attenborough. It's quite clear they're both very proud of their Oscar-winning film, but being a carpet, I can't quite remember what it's called. Do you know the name?

Released in 1982, 'Gandhi' is a film documenting the life of Mohandas Karamchand Gandhi, the man responsible for spearheading the resistance movement in India against the British, and doing so without violence, before his assassination in 1948. Ben Kingsley won the Best Actor award for his portrayal of Gandhi, and Richard Attenborough won for Best Director.

The film also received the Best Picture, Best Original Screenplay, Best Film Editing, Best Art Direction, Best Cinematography, and Best Costume Design awards at the 1983 Academy Awards.
8. I can see another knight, Sir Anthony Hopkins, walking down me, the red carpet, thankfully not looking as malevolent and creepy as he did in his film, alongside Jodie Foster. With a few mentions of quiet sheep, I think it's safe to say that I can definitely remember the name of this landmark film. But can you?


Answer: The Silence of the Lambs

A film is considered to have won the "Big Five" if it comes away with Academy Awards for Best Picture, Best Director, Best Actor, Best Actress, and Best Screenplay. Very few films of the twentieth century managed this feat, and 'The Silence of the Lambs' did so in 1992. Based on the novel by Thomas Harris, it centres around FBI agent Clarice Starling (played by Jodie Foster) and her attempts to get cannibalistic serial killer Hannibal Lecter (played brilliantly by Anthony Hopkins) to provide her with information to help track down another notorious serial killer, Buffalo Bill.

Despite having a relatively small amount of screen-time, Hopkins' masterful performance earned him the Best Actor award, and Jodie Foster also claimed the Best Actress Oscar.
9. Look, there's Kate Winslet and Leonardo DiCaprio, talking about what appears to me to be a 'huge', 'massive', and 'giant' film. The name of the film in question momentarily escapes me, but I know it's synonymous with all of these words. Can you remember it?

The James Cameron-directed film depicts the devastating tragedy that befell the RMS Titanic on its maiden voyage from Southampton to New York City. As one of the highest-grossing films of all time, the story of 'Titanic' centres around Jack Dawson (played by Leonardo DiCaprio) and Rose DeWitt Bukater (played by Kate Winslet) who become infatuated with one another during the voyage, before the collision with the iceberg. Jack sacrifices himself so that Rose can survive.

At the 1998 Academy Awards, 'Titanic' picked up 11 Oscars from 14 nominations.
10. Rounding off the celebrations this evening are Colin Firth and Geoffrey Rush, with the former addressing the masses with his English charm. He mentions how he felt privileged to play the role of a British monarch. I remember it now - it's a fantastic film. Do you know the name of this 2010 film?

Colin Firth stars as Prince Albert, Duke of York (later King George VI), who suffers from a stammer which has afflicted him all his life. Thanks to the help of Australian speech therapist Lionel Logue (played by Geoffrey Rush), Albert is able to overcome his speech impediment. Colin Firth was praised highly for his performance, which earned him the Academy Award for Best Actor in 2011. 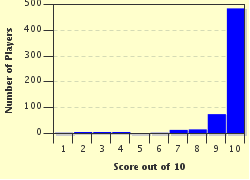 Go to Awards and Festivals Quizzes