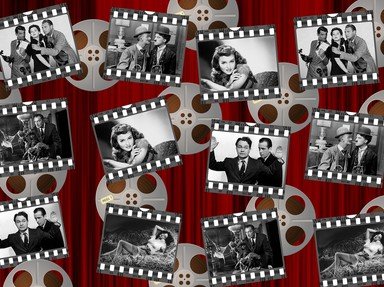 This selection is by no means a definitive top 10 list. It's just a list of films that have made a lasting impression on me and all are in black and white.

Quiz Answer Key and Fun Facts
1. This 1927 film was directed by Fritz Lang. In this film the head represents the intellectuals who can think but cannot implement and the hands represent the workers who, by their work, maintain the head. What is the name of this film that also features a mad scientist and a mechanical creature?

The screenplay was written by Lang's wife Thea von Harbou and starred Alfred Abel, Brigitte Helm, Gustav Frohlich, and Rudolf Klein-Rogge. The main message of the film was "The mediator between head and hands must be the heart".
2. This 1933 film is a classic story of beauty taming the beast. What is the name of the film, directed by Merian C. Cooper and Ernest B. Schoedsack, that reaches its climax at the Empire State Building?

A film crew goes to exotic Skull Island for filming. The natives there worship a giant gorilla called Kong and after capturing the young blond actress, played by Fay Wray, offer her as a sacrifice to him. Kong falls in love with the girl and instead of eating her he takes her away to his mountain hideout.

The film director manages to capture Kong and transport him to New York where he is put on show.
3. In this 1949 film directed by Carol Reed a writer, Holly Martins, goes to Vienna after being offered a job from his friend, Harry Lime, only to discover that Harry was killed. Holly Martins meets Anna Schimdt at Harry's funeral and intrigued decides to investigate his friend's death by searching for which person?

The film was based on a book by Graham Greene, who also wrote the screenplay. Joseph Cotten is Holly Martins, Orson Wells is Harry Lime and Alida Valli is Anna Schimdt.
4. A boot maker in Lancashire England decides that he will not allow his three daughters to marry. His eldest daughter comes to head with her father by marrying his expert boot maker and set him up as a rival to him. What is the title of this 1954 film directed by David Lean that in English slang means no choice at all?

"Hobson's Choice" was adapted for cinema by David Lean from the book of the same name by Harold Brighouse. Charles Laughton plays Henry Hobson, Brenda de Banzie plays the eldest daughter, Maggie Hobson, and John Mills plays William Mossop, the man Maggie marries. The film won BAFTA's film award in 1955.
5. This 1964 film follows the escapades of The Beatles and Paul's grandfather. In this film Ringo goes missing, after being told by Paul's grandfather to go out and enjoy life rather than sit in a hotel room reading a book. What is the name of the film that was directed by Richard Lester?

The Beatles were John Lennon, Paul McCartney, George Harrison and Ringo Starr. The script was written by Alun Owen and Paul's grandfather was played by Wilfrid Brambell.
6. Marion Crane embezzles 40 thousand dollars and in trying to avoid capture makes a detour and ends up in an isolated motel. The motel is run by Norman Bates who appears to be under the influence of his domineering mother. What is the name of this 1960 Alfred Hitchcock thriller?

The film was based on a Robert Bloch novel adopted for cinema by Joseph Stefano. Marion Crane was played by Janet Leigh, Norman Bates by Anthony Perkins, Marion's sister Lila Crane by Vera Miles and Marion's married lover Sam Loomis by John Gavin.
7. Two musicians, trying to escape the Chicago mafia, join an all girl band that is heading for Florida by dressing up as women. What is the name of this highly amusing comedy directed by Billy Wilder in 1959?

The two musicians, Joe/Josephine and Jerry/Daphne, were portrayed by Tony Curtis and Jack Lemmon, with Marilyn Monroe playing one of the girls (Sugar Kane Kowalczyk) and the love interest of Joe. Jerry/Daphne becomes the love interest of eccentric millionaire Osgood Fielding III, played by Joe E. Brown.
8. Two Americans, Fred Dobbs and Bob Curtin, in Mexico struggling to make ends meet join up with Howard an old gold prospector and together they go in search of gold in the Mexican mountains. What is the name of this 1948 film directed by John Huston?


Answer: The Treasure of the Sierra Madre

Humphrey Bogart was Dobbs, Tim Holt was Curtin and Walter Huston was Howard. John Huston provided the screenplay that was based on a novel by B. Traven.
9. Finding himself accused of murder, Richard Hannay, a Canadian visiting London, is trying to prove both his innocence and to uncover a spy ring. What is the name of this 1935 film directed by Alfred Hitchcock and based on a John Buchan novel by the same name?

The film was adapted for the cinema by Charles Bennett with additional dialogue by Ian Hay. Richard Hannay was portrayed by Robert Donat and Pamela, the girl Richard kisses on the train to avoid his pursuers, by Madeleine Carroll. If you would like to know what the 39 steps mean then you'll have to watch the film!
10. This 1922 horror film is believed to be the precursor for all other films in the same genre. The film is based on Bram Stocker's "Dracula". What is the name of the film that was directed by F. W. Murnau?

In "Nosferatu" Count Orlok, played by Max Schreck, wants to purchase a house and for this reason he invites Thomas Hutter, played by Gustav von Wangenheim, to his castle in Transylvania. Orlok is attracted by Hutter's wife Ellen, played by Greta Schroeder, and buys a house that is located near the Hutter's residence.
Source: Author gme24 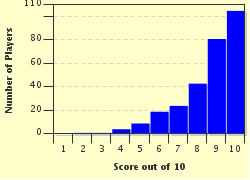