My quiz will be on both parts of the movie, "Kill Bill". Both volumes were excellent. I found the first volume more violent, while the second one had more dialogue. The angry bride is on a mission. See if you can answer these questions. Good luck!

Quiz Answer Key and Fun Facts
1. How does the first scene of "Kill Bill Volume 1" begin?


Answer: the bride is all beaten up and lying on the floor

It was quite a gory beginning to this movie. The scene opens and we see the Bride lying on the floor, scared and very shaken up. Bill walks over to her and wipes some blood off of her face. He then asks her a question and prepares to shoot her. A second before he pulls the trigger, she tells him the baby she's carrying is his. Bang!
2. How does Beatrix (a.k.a. the Bride) kill Elle Driver?

It was another gory scene. Elle and Beatrix start having a sword fight. They are both very angry women, and are both very smart. Unfortunately, Elle wasn't smart enough to anticipate Beatrix ripping out her other eye! After that we just see Elle screaming in such pain about her eye, but we don't think that actually killed her. But it was enough to stop her for a while!
3. What was Beatrix's last name?

Throughout both movies we hear Bill calling the Bride, Kiddo. I thought it was his pet name for her. For most of the movies she was referred to as the Bride. In "Kill Bill Volume 2", we find out her name is Beatrix Kiddo.
4. How did Beatrix kill Budd?

Budd stole Beatrix's sword and offered it to Elle for a million dollars. Elle drove to his trailer the next day with the money. She presented him with the suitcase, and he gave her the sword. He was so excited that he opened the suitcase and took out some of the money.

As he lifted up some of the money we see Elle had planted a Black Mamba in there and it bit him several times. After about twenty seconds he died.
5. Who was first on Beatrix's hit list?

As we all know, in Quentin's movies he usually puts the sequences of events in a different order from when they actually occur. He made it look as though she killed Vernita first but in actual fact it was O-Ren.
6. What did Budd NOT do to Beatrix?


Answer: stab her in the leg

Budd was prepared for her alright. He shot her in the chest, tied her up and then buried her alive. She managed to free herself and was ready to kill him, but Elle beat her to it.
7. What was Beatrix's and Bill's daughter's name?

They don't really go into depth as to why her name is BB, but I think it's because both of her parents' names start with a b. While The Bride was in a coma, they had to deliver the baby because it was still alive. During that time, Bill took care of BB. It wasn't until Beatrix went to kill Bill, that she found out that her daughter was alive.
8. Who killed Beatrix's trainer?

Elle didn't appreciate him ripping out her eye, so she poisoned his fish, and watched him die. That is why Elle has an eye patch over her eye. It wasn't until "Volume 2" that Elle's other eye got ripped out by The Bride. After that we don't see Elle again.
9. What color was the car that Beatrix was driving in "Volume 2"?

She traded in the bright yellow wagon for the little blue convertible!
10. How did she kill Vernita Green?


Answer: she threw a knife at her and it stabbed her in the heart

It was a very comical scene. Beatrix came to kill Vernita, so they began to fight. There was glass everywhere, blood all over them and then Vernita's daughter comes home from school and they have to pretend that everything is alright. She sends her daughter upstairs and offers Beatrix a cup of coffee. Vernita tries to talk her way out of being killed but Beatrix doesn't care.

They make a date and a time to meet for a sword fight. As Vernita prepares her daughter's cereal she puts a gun inside the box and takes a shot at Beatrix.

She misses. In shock, Beatrix grabs her knife and throws it at Vernita, stabbing her right in the chest.
11. Who was the piano player at the wedding rehearsal?

Samuel L. Jackson made a cameo appearance in "Kill Bill Volume 2". He didn't really say much, but it was good to see him involved.
12. What weird habit does the bride have no control over?

At the beginning we see the bride has been beaten up and shot in the head. Two policemen checking out the scene of the crime were looking at her just lying there unconcious, assuming that she was dead. All of a sudden she spits blood in one of the policeman's face. Obviously she had no control over it because she was unconcious. We also see her spit after she wakes up from being in a coma for four years.
13. Which member of the assassin squad said that Beatrix deserved her revenge, and that they all should die for what they did to her?

They all sort of felt that way. They knew they had messed her up pretty badly, but it was Budd who actually verbalized it at the end of "Volume One".
14. Which members of the assassin squad are related?


Answer: Budd and Bill are brothers

We learn that they are brothers in "Kill Bill Volume 2".
15. Why did Beatrix leave the assassin squad?


Answer: she was pregnant

When Beatrix found out that she was pregnant, that changed everything. Being pregnant meant her life of killing innocent people for money was over, her baby became her number one priority.
Source: Author ginger67 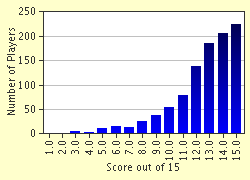 
Other Destinations
Explore Other Quizzes by ginger67