When I found there were no quizzes on "Sky High" I just had to create one.

Quiz Answer Key and Fun Facts
1. Who is the main character?

Will is the son of the most famous powerful man ever (Steve Stronghold, otherwise known as The Commander). He goes to Sky High. He has been best friends with Layla since Primary School.
2. What is Sky High?

Sky High is a high school that is in the sky. The bus that gets the kids there is more like a fair ride. The first time children go there they scream a lot.
3. Will has been friends with Layla since primary school.

Layla Williams and Will Stronghold are best friends when they first come to Sky High. Layla probably fancied Will before they even came to high school, but he doesn't know. They make friends with Magenta, Zach, Warren Peace at the end, and most of the other sidekicks. Magenta can turn into a guinea pig, Warren can make fire, Zach can glow and Layla can do almost anything with plants.
4. Everyone at Sky High has powers. What is Will's power?


Answer: He is super strong and can fly.

Will gets the super strength from his dad. He gets his flying abilities from his mum.
5. When Will changes to Heroes class who is his partner?

Gwen tells him that she will help him with work, and asks if he'd like extra coaching. After she starts coming to his house for coaching they become girlfriend and boyfriend.
6. Who is Royal Pain?

Gwen is turned into a baby, and is not killed, so she survives. Once she is a baby and works out what the gun has done, she starts planning.
7. Why does Layla say to Will she never wants to talk to him again?


Answer: Because Gwen tells her that Will doesn't want her around

Will's parents are away and Gwen asks Will if she can invite a few people, and, reluctantly, he agrees. She invites all of the heroes, and they have a party. Will wants to invite some sidekicks too, because Layla is a sidekick, but Gwen stops him.
8. What is Zach's power?

No one believes him when he says that he glows, but when the lights go, he glows green. Zach is very tall and sometimes stupid.
9. What happens to Sky High?

Sky High starts falling towards Earth. Luckily Magenta, in guinea pig shape, stops it. Will flies down and pushes it back up.
It lands on someone's non-insured house, but stops just in time so it doesn't crush it.
10. How does Royal Pain get the gun from the Commander's workshop?


Answer: Will lets them in

Will lets Gwen into his father's and his workshop and while they are kissing, Gwen's "father" (who is Speed) sneaks past and takes the gun.
Will was told by his dad never to let anyone else in but he shows his workshop to Gwen.
Source: Author elenden 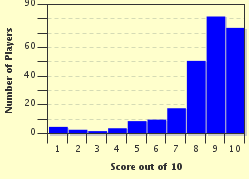 
Other Destinations
Explore Other Quizzes by elenden