Who Said What? Trivia Quiz

"The Lion King" is a timeless Disney movie with a great plot, amazing characters, and wonderful music. But can you remember who said certain things?

Quiz Answer Key and Fun Facts
1. Who sings this line from "I Just Can't Wait to Be King"? "Everywhere you look, I'm standing in the spotlight!"

"I Just Can't Wait To Be King" is Simba's famous song. He can't wait for the day he becomes King, because then he will be able to do whatever it is that he wants.
2. Which "The Lion King" character says, "Slimy yet satisfying"?

Simba says this about a bug he eats, repeating what Pumbaa said earlier.
3. Which character from "The Lion King" says, "Remember who you are."?


Answer: The spirit of Mufasa

The spirit of Mufasa says this while Rafiki is trying to get Simba to go back to Pride Rock. Mufasa reminds Simba of who he really is and Simba goes back to pride Rock to fight Scar.
4. Like most of the characters of "The Lion King", this character has many one-liners. Which character has this one-liner in the movie, "Long live the King!"?

Scar says this as he throws Mufasa back into the stampede. The stampede is a setup by Scar to get rid of both Simba and Mufasa, thus taking the throne for himself. However, Simba is saved by his father and lives on.
5. Upset, one of "The Lion King" calls out to the sky, "You said you'd always be there for me!" Which character is this?

Simba yells this at the sky, talking to his father. After Mufasa dies, Simba is made to believe that his father's death is his fault. However, that is only something Scar tells him to get him to run away and make everyone else think he passed on.
6. Which "The Lion King" character says, "You won't find him here. The King has returned."?

Nala goes to find Timon and Pumbaa after she loses track of Simba. While they are all wondering where he is, Rafiki says the given line. Nala concludes that Simba has gone back to Pride Rock to challenge Scar.
7. Which "The Lion King" character says, "Friends? I thought he said we were the enemy."

After Scar falls from Pride Rock, he lands amongst the hyenas. He calls them friends, but Shenzi remembers that he told the lions that the hyenas were the enemy. Banzai and Ed agree. Scar dies after being attacked by the hyenas.
8. Who offers Simba this 'advice'? "Run away, Simba. Run away. And never return."

Heartbroken due to the death of his father, Simba is at a loss of what to do. Scar tricks him into thinking that his father's death is his fault. Simba asks what he should do, and Scar gives him this piece of advice.
9. "Well, he'd make a very handsome rug." Which character gives this piece of information about Scar?

At a loss with how to deal with Scar, Mufasa says "what am I going to do with him". Zazu us there at the time and says this to him. Mufasa scolds him, but he is laughing at the same time.
10. Which character says this to Simba: "Everything you see exists together in a delicate balance."?

Mufasa offers this piece of wisdom to Simba when he is a cub. Mufasa is trying to teach his son that every creature in the savanna is connected in the "circle of life". Simba is confused when his father mentions antelope, because lions eat them.
Source: Author dlbn 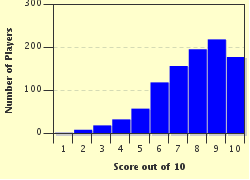