Are you sure you know what you say you know about this fantastic Disney classic?

Quiz Answer Key and Fun Facts
1. What was the name of Nala's mother?

Sarabi is Simba's mother and Shenzi is one of the hyenas. Sarafina is played by Zoe Leader.
2. Please complete this sentence. "Didn't your mother ______?"


Answer: ever tell you not to play with your food

Zazu says this at the beginning of the movie when he catches Scar fiddling with a mouse.
Scar: "What do you want?"
Zazu: "I'm here to announce that King Mufasa is on his way, so you'd better have a good excuse for missing the ceremony this morning!"
Scar: "Oh now look Zazu; you've made me lose my lunch!"
3. Which hyena said this line - "Did we order this dinner to go?"

Shenzi: "No; Why?"
Banzai: "'Cause there it goes!"
They say this when Zazu, Simba and Nala go to the Elephant Graveyard which is where the hyenas live. The hyenas were making up jokes when the cubs and Zazu try to escape.
4. When Rafiki says to Simba that his father is down in the pool of water, who does Simba say it is at first?

Rafiki: "Look down there."
Simba: "That's not my father, that's just my reflection."
Rafiki: "Noo. Look harder. (Mufasa's face appears in the water) You see, he lives in you."
5. How many Oscars did the film win?

The Oscars were for Best Music and Original Score. Hans Zimmer won the award for Best Music for the song "Can You Feel the Love Tonight?"
6. Pumbaa means 'Friend'.

Rafiki means 'Friend' and Pumbaa means 'Simpleton'. Lots of the other characters' names have meanings as well such as Banzai - 'Skulk, Lurk', Sarabi - 'Mirage', Shenzi - 'Uncouth' and Simba - 'Lion'.
7. What colour is the bit around Rafiki's eyes?

There are two shades of blue around his eyes. Closest to his eyes is a darker blue, then further out is a lighter blue. There is a little bit of grey also.
8. Scar is Simba's grandfather.

The most popular Elton song in "The Lion King" is "Can You Feel the Love Tonight?" This is played when Nala and Simba are realising how much they love each other playing in the fields. Elton John also originaly sang "Circle of Life".
10. Timon is a pink what?


Answer: Timon is not pink, he is a light brown meerkat

Pumbaa is the warthog.
11. How many times did Nala 'pin' Simba when they were rolling around near the Elephant Graveyard?

Simba: "All right, it worked!"
Nala: "We lost him."
Simba: "(Arrogantly) I... am a genius."
Nala: "Hey, Genius, it was my idea."
Simba: "Yeah, but I pulled it off."
Nala: "With me!"
Simba: "Oh yeah? ...Rrarr!"
(Simba jumps at Nala and Nala ends on top and 'pins' Simba with her forepaws)
Nala: "Ha. Pinned ya."
Simba: "(Annoyed) Hey, lemme up!"
(Nala turns away smiling. Simba jumps at her again and Nala once again 'pins' Simba in the same position.)
Nala: "Pinned ya again."
She also pins him when they are adults, but that's not in the elephant graveyard.
12. What is the name of the Hornbill in this movie?

A Hornbill is a bird with a long beak. Simba mentions that Zazu is a Hornbill in the movie as well where he and Nala are singing "Just Can't Wait to be King" and he says, "Kings don't need advice from little Hornbills for a start".
13. Complete this sentence, "You know, you're starting to sound like ___________."


Answer: Mufasa from the clouds

Kiara is Simba and Nala's newborn cub and you find out about her life in the second "Lion King" film, "Simba's Pride".
15. What is the name of the lion and lionesses' cave?

It is a HUGE rock and sometimes in the film I've noticed that it changes size and shape a few times. For example - at the beginning of the movie when Mufasa is showing Simba his kingdom, it looks like they are on a separate rock from Pride Rock but when it shows them walking out to the edge of it, it looks all in one piece.
Source: Author katewinsletrox 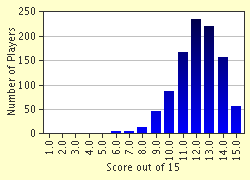 
Other Destinations
Explore Other Quizzes by katewinsletrox