Here is a brief quiz on one of my favorite Disney movies. Have fun!

Quiz Answer Key and Fun Facts
1. What animal is Simba practicing his roar on while he is waiting for his dad in the gorge?

The movie was going to be originally called 'King of the Jungle' with Meryl Streep as one of the main characters.
2. "Oh, just look at you two. Little seeds of romance blossoming in the ________." What is the last word in this sentence.

Zazu says this about Simba and Nala on their way to the water hole.
3. "What's the hurry? We'd looove you to stick around for dinner." Who said this?

In the stampede, when Mufasa says, ' Scar....Brother,' before he says brother you can hear someone else whisper brother.
4. According to Pumba, what are stars?

I always wondered why the wildebeests never stopped when they saw Mufasa. I mean if he is the king why wouldn't they listen to him if he told them to stop.
5. During the song "I just can't wait to be king", Zazu falls into a puddle and then drys himself on something. What does he use to dry himself? 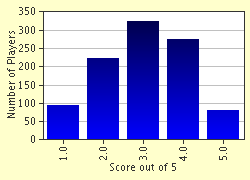 
Other Destinations
Explore Other Quizzes by SSplash85