This quiz is on 'The Lion King'. Enjoy!

Quiz Answer Key and Fun Facts
1. What is the name of Nala's mother?

'Well, the buzz from the bees is that the leopards are in a bit of a spot... the baboons are going ape, and of course the giraffes are acting like they're above it all... the tick birds are picking on the elephants. I told the elephants to forget it, but they can't... and the termites as usual, are boring, boring, boring,' etc, etc, etc.
3. The elephant graveyard is beyond which border?

'He didn't show what's beyond the rise of the Northern border?'
4. Why does Simba first start to walk into the elephant skull?


Answer: To see if its brains are still in there

Nala wondered if its brains were still in there, and he went in the check it out.
5. What is Mufasa's last word spoken to Scar? (When he was alive, not his ghost)

The last phrase was 'Scar, brother, help me.'
6. Which hyena fell into the thorns when chasing Simba?

Ed and Shenzi laughed and Banzai crawled out looking like a cactus.
7. Is Scar's scar on his right eye?

It's on his left. It's slightly strange that he must have been named Scar when he was born, but probably actually got the scar later in his life. Maybe it's just a nickname and then there's the fact that this is a Disney movie and no one really cares.
8. When 'giving him a bath,' how many times does Sarabi lick Simba?

He says he is ten times the king Mufasa was.
10. Which hyena says, 'Friends, I thought he said we were the enemy?'

Shenzi was voiced by Whoopi Goldberg. I hope you enjoyed this quiz.
Source: Author triviamonarche 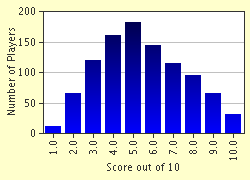 
Other Destinations
Explore Other Quizzes by triviamonarche