Hi. How are you doing? Hope you're doing well. I also hope you do well on this quiz.

Quiz Answer Key and Fun Facts
1. Finish this lyric 'But your thoughts will soon be wandering....'?


Answer: the way they always do

Cliff Burton died in a tour bus crash in Sweden.
3. What song is the lyric 'Touch clean with a dirty hand' from?

Kirk Hammett is a vegetarian.
5. What was the song 'The Four Horsemen' originally called?

James Hetfield lost the mullet in 1996.
6. Which Metallica song was Sting, a WCW wrestler's, theme song?

7. What are the three remaining band members (as of June 2003) last names?


Answer: Whiskey in the Jar

9. Who does James Hetfield claim to have hated ever since he can remember?

He claims this during an interview included in the "Whiskey in the Jar" CD single.
10. Name three albums which have songs titled the same as the album name? 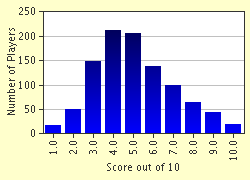 
Other Destinations
Explore Other Quizzes by the_lesser_weevil