Here's my first quiz about the best band of all time.

Quiz Answer Key and Fun Facts
1. Metallica's first album contained a song called "The Four Horsemen"- but what was this song also called?

They gave this song a new name and lyrics following the departure of original lead axeman Dave Mustaine (who went on to form Megadeth.) The song "Mechanix" would eventually appear on Megadeth's debut album, 1985's 'Killing Is My Business...And Business Is Good!'
"Power Metal" was the band's first EP.
2. "Ride the Lightning" was Metallica's second album, and saw the band's songs grow both musically and thematically. It also featured their first proper 'ballad', a slower, introspective song about suicide. What was the name of this song?

All the songs on "Ride The Lightning" were about death! Each song dealt with a different way of dying, from nuclear war in "Fight Fire With Fire" to the biblical events of ancient Egypt (Plagues, deaths, the first Passover, etc) in "Creeping Death."
3. Metallica's third album, 1986's "Master of Puppets" would set the standard in thrash metal. What is the correct order that these four classics come on that album? (In the UK)

This one's easy if you own the album, as any true Metallica fan should! If you got this wrong you only have yourself to blame!
4. While playing the "Monsters Of Rock" festival in 1985, James Hetfield told the crowd of 70,000 that Metallica would be the one band that didn't include a certain phrase in every song. What was the phrase?

As the bill contained such acts as Bon Jovi and Ratt, James thought he'd warn the crowd that Metallica was a little different! In doing so, he displayed his legendary on-stage persona that is still with him today. Alas, the same can't be said of his hair...
5. Metallica's 1988 offering "...And Justice For All" saw the band take thrash places that it hasn't been taken since. The album also featured the song that would become their first video. What was the name of that song?

The video included footage from the film "Johnny Got His Gun." The band had to purchase the rights to the film in order to include it in their video!
6. What was the name of the short album of covers that Metallica released in 1987 to introduce fans to new bass player, Jason Newsted?

This album became a rare collector's item after being withdrawn soon after release. Jason was brought in to replace previous bassist Cliff Burton, who died in a road accident in Sweden in 1986. RIP Cliff
7. Metallica got a new producer for their 1991 "Metallica" album, which is also known as "The Black Album". Who was he?

Bob told the band that he thought they had never made a record that showed off their full capabilities. Hetfield and co. embraced the challenge, and "Metallica" went on to be a global mega-hit.
8. Tricky question this. On the video/DVD "Cunning Stunts", a Metallica classic is only half played, before "Enter Sandman" kicks in. Which song do they only half-play?

This live performance will be remembered for the almost ludicrous stunt at the end of "Enter Sandman", including crashing stage equipment, guys on fire and more!
9. In 1999, Metallica teamed up with the San Francisco Symphony orchestra to perform "S&M." This was a collection of Metallica classics which had been put to orchestral accompaniment. Which of these songs was NOT on the record?

The band was nervous before the two nights, as they had never attempted anything like this before! The end result was excellent, with two new songs being performed. ("No Leaf Clover" and "Minus Human".) Metallica had wanted "The Unforgiven" to be included, but a suitable orchesral part couldn't be written.
10. The title track off 2003's "St Anger" features lyrical references to two earlier Metallica songs. They are...

There is no Metallica song called "Set It Free"! The line from "St Anger" that also appears in "Damage Inc" is the part before the line 'I hit the lights on these dark sets.' This album was the first studio album Metallica had made since 1997!
Source: Author al33 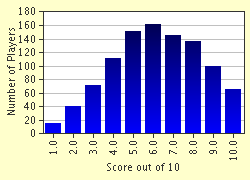 
Other Destinations
Explore Other Quizzes by al33