Alice changed his image during 1980-1985 to try and appeal to the new wave, punk era. Album sales and promotion dropped drastically. Personal problems (alcoholism) resurfaced, yet in my humble opinion, some of his best stuff came out then.

Quiz Answer Key and Fun Facts
1. Alice charted only one song during this period. What was it?

'Clones' reached number 40 on Billboard's charts. He had some low charting songs in England.
2. Which album listed a song that did not appear on the album?

'Look at you over there ripping the sawdust from my teddybear'. When I bought this album in 1981 it never occured to me that it was supposed to be a song because Alice always put off the wall stuff on his albums. I have a quiz based on all of those things that I hope to post soon.
3. What song was the theme for the movie 'Class of 1984'?


Answer: I Am the Future

This sci-fi brutal planet type movie was the only promotion the album 'Zipper Catches Skin' would get. And that ain't much.
4. True or False: Alice did not tour during the years 1980-1985?

The 'Flush the Fashion' tour was quite successful. 'Special Forces' was less so in 1981. After that Alice would not be seen live in America until mid 1986! A very dark period in American history.
5. What 1980 movie starring Meatloaf was inspired by a song from 'Lace and Whiskey'?

'Road Rats' was the inspiration for this Hollywood classic which also featured Blondie, Art Carney and Alice wering his 'disco sucks' pin on his jacket.
6. What is the name of the woman who is being led through her horror acting scenes by Alice in 'Tag, You're It'?

Patty is in 'I Like Girls', Betty is 'Dead Babies', and Vampira is in 'Adaptable'.
7. Arguably more popular in England than America, Alice recorded a single released only in England in 1982. It reached number 66 on their charts. What was it?


Answer: For Britain Only

Gee, that was tough, huh? 'For Britain Only' is on of many gems found on the box set 'Life and Crimes of Alice Cooper'. Highly recommended.
8. In 1984, Alice appeared in his only starring dramatic role. What movie was it?

Alice plays Vince Raven, a man haunted by his family's dark past and rumors of werewolves. Two cool songs recorded for the movie are also on the box set. Leonard Maltin gave this flick four stars! I say this movie proves that the Oscars are rigged!
9. Aside from the child's voice saying 'dada', what are the vocals on the song 'Dada'?


Answer: Alice talking with a psychiatrist

Very creepy song from Alice's most bizzare album. Some of his best lyrics ever.
10. What band can be credited with helping Alice kickstart his stalled career by inviting him to sing and appear in the MTV age video, 'Be Crool to Your Scuel'?

This song and video showed Alice to a new generation. A generation to whom he had become a legend and didn't even realize it. He put the makeup back on, went back into the studio, and came back the next year nastier than ever. Remember the Coop, huh.
Source: Author alexcooper79 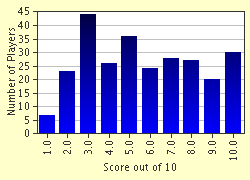 
Other Destinations
Explore Other Quizzes by alexcooper79