Anatomy of a Song: "Sounds Of Silence" Quiz

Just how much do you know about Simon and Garfunkel's classic "Sounds Of Silence"? Pit yourself against 10 questions about the song and/or associated facts. Song #25 in the 'Anatomy' series.

Quiz Answer Key and Fun Facts
1. In the opening to the the song, who/what is the singer talking to?

"Hello darkness, my old friend
I've come to talk with you again"

This is a great way of setting the scene for the song. As a youngster I remember rationalising this by asking "Why doesn't he turn on the light?" Life was so much easier then!
2. Where was it that the singer "walked alone"?

"In restless dreams I walked alone"

Ah! Haven't we all been there at one time or another?
3. What did the "vision softly creeping" leave whilst the singer was sleeping?

"Because a vision softly creeping
Left its seeds while I was sleeping
And the vision that was planted in my brain
Still remains
Within the sound of silence"
4. What were the "narrow streets" constructed of?

"In restless dreams I walked alone
Narrow streets of cobblestone"

"Sound Of Silence" (which also gets displayed in various S&G material as "Sounds Of Silence" or "The Sound Of Silence") was originally released on the wonderful folk/rock album "Wednesday Morning, 3 A.M.". The version on the album is more acoustic than the one that appears in the soundtrack of "The Graduate".
5. To the best of our knowledge, what can we assume the weather conditions were during the song?

"Neath the halo of a street lamp
I turned my collar to the cold and damp"
6. Apart from the "street lamp", what other kind of light is mentioned in the song?

Eep! I hope you didn't say "Electric Candlelight"! If you did, you are getting the song mixed up with The Kinks' "Lola", which I must add would be a pretty hard thing to do!

Neon is mentioned twice in the song:

"And the people bowed and prayed
To the neon god they made"
7. At least how many people were "writing songs that voices never share"?

"And in the naked light I saw
Ten thousand people, maybe more"

"Sounds Of Silence" hit number 1 spot in the U.S.A on New Year's Day in 1966.
8. In the song, we have "people hearing without listening". Which of these other activities are the people also doing?

"And in the naked light I saw
Ten thousand people, maybe more
People talking without speaking
People hearing without listening
People writing songs that voices never share"
9. What disease do Simon & Garfunkel use to make an analogous reference to silence?

"Fools" said I, "You do not know
Silence like a cancer grows
Hear my words that I might teach you
Take my arms that I might reach you"
But my words like silent raindrops fell
And echoed in the wells of silence"

According to www.songfacts.com: "Despite its great popularity, Blender magazine voted this the 42nd worst song ever, remarking sardonically that "If Frasier Crane were a song, he would sound like this". The magazine's editor, Craig Marks, defended Blender's decision to include this much-loved song on their list, stating: "It's the freshman-poetry meaningfulness that got our goat, with self-important lyrics like 'hear my words that I might teach you', it's almost a parody of pretentious 60s folk-rock." The brief article on the song corresponding with this called the 'hear my words' line "the most self-important - in rock history", and elaborated on Mark's remarks with: "Simon and Garfunkel thunder away in voices that suggest they're scowling and wagging their fingers as they sing. The overall experience is like being lectured on the meaning of life by a jumped-up freshman".

My response is (a) This is why I do not buy Blender magazine, and (b) everybody has the right to be totally wrong!
10. In the last verse, we hear where "the words of the prophets" are written. Which 60s female singer would caution against sleeping in that place?

Okay, this was a bit of a stretch, but I had fun doing it! "The words of the prophets are written on the subway walls". Petula Clark advises us "Don't Sleep In The Subway". Therefore the connection is "subway".
Source: Author FussBudget 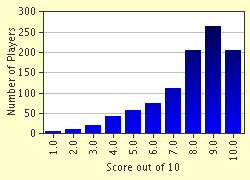 Related Quizzes
This quiz is part of series Anatomy of a Song - Part 1:

This is part 1 of a collection of all of my "Anatomy of a Song" quizzes. They were the originals, much imitated since. I guess I should take that as a compliment!