Are you an ABBA fan? Trivia Quiz

This quiz is very easy and simple, if you are an ABBA fan. Even if you aren't, it's easy too! :)


Answer: since I don't know when"

They met in Malmö, South of Sweden, in 1969.
4. What is ABBA's very last song released, available on "More ABBA Gold" and other compilations?


Answer: I Am the City

This song was recorded to be part of their tenth album, but it was never done.
5. What is the Spanish title for "Dancing Queen"?

It is available in "ABBA Oro".
6. When did they win the Eurovision Song Contest?

It was in 6th April, a day after Agnetha's birthday, in Brighton, England.
7. "Mamma Mia" was number one in USA.

The only ABBA number one in USA was "Dancing Queen".
8. When did Agnetha and Björn get married?

Ther got married in 1971 and it was the event of the year in Sweden.
9. Acording to ABBA's "Super Trouper", when Frida called to her man, where she was?

The original lines: "I was sick and tired of everything, when I called you last night from Glasgow...".
10. What is the name of Björn and Benny's first musical?

Björn and Benny always wanted to write a musical and, after ABBA, in 1983, they wrote "Chess".
11. On which album do we find "Chiquitita"?

Agnetha sings the first and second part and in the chorus has the help of the other members of the group.
13. What is the name of the song that tells us about a romance in Paris?

Frida was born in Norway, and her mother was from Narvik.
15. At last, what is the name of Agnetha's album released in 2004? 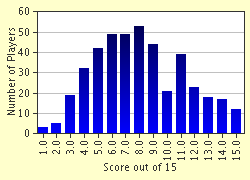 
Other Destinations
Explore Other Quizzes by 3zp3cial