If you love ABBA, you've come to the right place! For this quiz, I give you the title of a song, and you tell me the ABBA album the song originally appeared on. Good Luck!

'Arrival', featuring the famous helicopter cover shot, was released in 1976.
2. 'The Name of the Game'

'The Visitors' was ABBA's final studio album.
4. 'Gimme Gimme Gimme (A Man After Midnight)' which of these albums does it appear on?

The recording of this song began in August of 1979.
5. 'Thank You For the Music'

'Thank You for the Music' was one of the songs in 'The Girl With the Golden Hair- A Mini-musical.'
6. 'Chiquitita'

The video for 'Chiquitita' features a giant snowman.
7. 'Honey Honey'

'Waterloo' was ABBA's winning ticket from Eurovision to international stardom.
8. 'The Day Before You Came'

There is a reference to the television show 'Dallas' in this song.
9. 'One of Us'

Even though ABBA now consisted of two divorced couples, the group plunged forward with the release of their bittersweet masterpiece 'Super Trouper.'
11. 'My Love, My Life'

'My Love, My Life' is one of Agnetha's favorite songs. 'Under Attack' is not an album, but one of ABBA's final singles.
12. 'People Need Love'

'People Need Love' was originally recorded under the name 'Benny Bjorn Agnetha and Anni-Frid'. The story goes that Stig Anderson, the group's manager grew weary of writing out all four names and jotted down 'ABBA'.
13. 'As Good as New'

'..we're like sun and rainy weather, sometimes we're a hit together, Me and I...'
Source: Author agnetha27 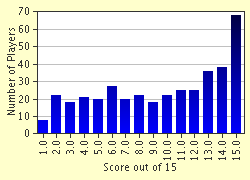 
Other Destinations
Explore Other Quizzes by agnetha27