Some lyrics, some biography... a little bit of everything for fans of one of the greatest bands of all time!

In 1972, Rutger applied for the position of bass player in a Swedish band called the Hootenanny Singers, which featured Bjorn Ulvaeus and Benny Andersson. In his first studio session with the band, he played on a song called "Ĺh, vilka tider", a little-known ABBA number that would be featured as the B-side to the Swedish single "Ring Ring". Rutger would appear on all of ABBA's albums and accompany them on all of their tours.

After the group split in 1983, he continued working with Benny and Bjorn.
2. What river is mentioned in the song "Fernando"?

"Can you hear the drums Fernando? Do you still recall the fateful night we crossed the Rio Grande?" This song, one of ABBA's biggest hits, was released as a single in most parts of the world, though it was included on "Arrival" in Australia and New Zealand.

The Rio Grande (or Rio Bravo) is a North American river that forms the border between Texas and Mexico before emptying into the Gulf of Mexico at Brownsville, Texas.
3. All of the members of ABBA were born in Sweden.

Anni-Frid (Frida) Synni-Lyngstad was born in Ballangen, Norway, in 1945 but has Swedish citizenship. The other three members are native Swedes. Frida moved to Sweden when she was one and a half.
4. Finish the line from "Does Your Mother Know?" "Does your mother know that you're ..."

I'll admit that I always thought it was "hot" until I saw the lyrics. This upbeat song, featured on 1979's "Voulez-Vous", was among the last to feature Bjorn on lead vocals.
5. Which of these ABBA songs is the odd one out? (Think 'words')

"I Have a Dream", from the album "Voulez-Vous", features Frida on lead vocals. The others are instrumental tracks. By the way, "Scaramouche" was never actually released.
6. Who came up with the name "ABBA"?

Stig Anderson, the band's record company owner and later manager, devised the clever acronym of the members' first names (Agnetha, Benny, Bjorn, Anni-Frid) in 1974. Stig, who died in 1997, owned Polar Music, the band's record label.
7. "Alice has been there, she said it was fun..." Where?

This is from "Happy Hawaii", a fun song released as the B-side of "Knowing Me, Knowing You" in 1977. "Alice has been there, she said it was fun, Swimming and surfing, enjoying the sun, Hey Honolulu, we're going to happy Hawaii". The song definitely makes you want to pack up and go to Hawaii (especially in the winter).
8. More ABBA geography. Where does the song "Our Last Summer" take place?

The song "Our Last Summer" was featured on the album "Super Trouper", released in 1980. There are many references to the French capital in the song, such as "the feeling right, the Paris night", "walks along the Seine, laughing in the rain", and "And we sat down in the grass
By the Eiffel Tower".
9. What was the last single released by ABBA as a group in 1982?

This single, recorded in December 1982 and released in February 1983, had as its B-side "You Owe Me One". It had moderate success, reaching Number 3 in Belgium and Number 5 in the Netherlands.
10. Finish the song title: "Another Town, Another ..."

"Another Town, Another Train", from the album "Ring Ring", features Bjorn on lead vocals. "Just another town, another train
waiting in the morning rain
Lord give my restless soul a little patience
just another town, another train
nothing lost and nothing gained".
11. Many people know that ABBA became famous when they won the Eurovision song contest in 1974 with "Waterloo". But this was not the first entry of the four, in the contest. Which song was, in 1973? (They did not qualify)

ABBA was considered to have "made it" when they won 1974's Eurovision contest, held in Brighton, England, with "Waterloo". They had entered the contest the previous year with "Ring Ring", coming in third. However, the song became a hit in Sweden and other European countries, and the album "Ring Ring" was released in Sweden in 1973.
12. Put on your thinking caps for this one. Which ABBA song contains the Latin phrase "sub luna saltamus"?

The phrase is Latin for "we are dancing beneath the moon" ("saltare", "to dance"). It is featured on the haunting and somewhat strange "The Piper", from the 1980 album "Super Trouper". The lyrics were said to be inspired by Stephen King's 1978 novel "The Stand".
13. What was the first "true" ABBA single, released in 1972?

This song, released in early 1972, was credited to "Bjorn & Benny, Agnetha & Anni-Frid", as the name "ABBA" wasn't coined until 1974. The first song recorded by all four members as a group, it reached the top 20 in Sweden.
14. What was ABBA's biggest-selling single ever and also their only US Number 1?

"Dancing Queen", released in 1976, became not only ABBA's best-selling single ever but one of the best-loved songs of the disco era. It has been called "the world's first Europop disco hit". The song debuted in August 1976 when the band performed it at a ball for King Gustaf XVI of Sweden, on the eve of his wedding to Queen Silvia.

This is probably the most remixed of ABBA's songs; there are probably fifty different mixes of it (one is called "Wedding Mix"). Frida once stated that this was her favorite of the group's songs.
15. What was the only ABBA song not recorded in Sweden?

"Voulez-Vous", from the album of the same name, was recorded at Criteria Studios in Miami, Florida, US. Incidentally, the Bee Gees, who were said to have influenced ABBA, had also recorded here.
16. Which ABBA song premiered at an all-star UNICEF gala in New York City in January, 1979?

This song, which features Agnetha on lead vocals, was originally titled "In The Arms Of Rozellita". Their most successful single of 1979, it hit Number 1 in many countries, including Zimbabwe, Ireland, and Mexico.
17. Who, according to ABBA, is "just like Cinderella"?

This is from the song "Nina, Pretty Ballerina", from the album "Ring Ring". "Ring Ring" was first released in Sweden on March 26, 1973. "Nina, pretty ballerina
now she is the queen of the dancing floor
this is the moment she's waited for
just like Cinderella". Remind you of another song?
18. Which ABBA song did Bjorn say was inspired by the book "Jonathan Livingston Seagull"?

Hopefully you got the bird reference. This song, one of my favorites, was featured on 1977's "ABBA: The Album". Bjorn, who wrote this beautiful song, stated that he was inspired to write it after reading Richard Bach's 1976 novel "Jonathan Livingston Seagull".

In an interview, Bjorn said that he tried "to capture the sense of freedom and euphoria that I got from reading that book" (from www.abbaannual.com).
19. Which ABBA album was originally going to be called "Piccadilly Circus"?

"Super Trouper", released in 1978, features such hits as "The Winner Takes it All", "On and On and On", and "Lay All Your Love on Me". The cover features the foursome, in a spotlight, surrounded by circus members and friends.
20. This song, released on "The Visitors" in 1981, was written about the breakup of Benny and Frida.


Answer: "When All is Said and Done"

"The Visitors", ABBA's eighth and final album, was released in Sweden in November 1981. "One of Us" would be the biggest hit from this album. Frida and Benny, who married in 1978, announced their divorce in 1981. (Bjorn and Agnetha divorced in 1979).
Source: Author bullymom 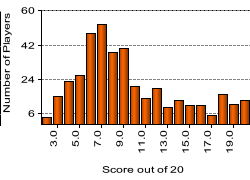