Here is a quiz on one of my favourite bands of all time!

Quiz Answer Key and Fun Facts
1. How many top ten hits did ABBA have in the USA?

Many people believe that ABBA was a flop in the United States, but that's not really true at all. They still managed to achieve a large amount of success; it just didn't look so large compared to their phenomenal success elsewhere.

The four top ten hits were "Waterloo" (no. six), "Dancing Queen" (their first and last US no. one), "Take a Chance on Me" (no. three) and "The Winner Takes it All" (no. eight).
2. Which of these songs does not detail a relationship breaking up?

The lyrics from "Waterloo" are not about breaking up, but rather they are about a girl surrendering to love, comparing her surrender to that of Napoleon at the Battle of Waterloo. The other three all detail a relationship ending. "The Winner Takes It All" was inspired by Agnetha and Björn's divorce, whereas "When All Is Said and Done" was inspired by Benny and Frida's divorce.
3. Björn Ulvaeus, Benny Andersson and Stig Anderson were the only people to ever contribute to writing ABBA songs.

There are two cases where other people have contributed to songwriting. The English translation of "Ring Ring" was helped by Neil Sedaka and Phil Cody. In addition, Agnetha Fältskog co-wrote "Disillusion", a little-known album track for the "Ring Ring" album.

They also once did a medley of three cover songs for charity (the three songs being "Pick a Bale of Cotton", "On Top of Old Smokey" and "Midnight Special").
4. Before the name ABBA was coined in 1973, the group went by various different namings. Which of the following was never used anywhere?

Björn and Benny, Agnetha and Anni-Frid was the billing most often used. Björn and Benny with Svenska Flicka was used in America (Svenska Flicka is Swedish for 'Swedish Girl'). Les Suecos was used in Mexico (Spanish for 'The Swedes'). Les Suédois is French for 'The Swedes', but was never used.
5. ABBA had nine chart-toppers in the UK. How many of them featured Agnetha more prominently on vocals?

The two number one singles which featured Agnetha on lead vocals were "Take a Chance on Me" and "The Winner Takes It All". Three featured Frida on lead vocals ("Fernando", "Knowing Me, Knowing You" and "Super Trouper"), and the remaining four had the two sharing lead vocals.
6. Every ABBA member except one was born in Sweden. Which one was born elsewhere?

Frida was born in Norway in November 1945, but she was taken by her grandmother to Sweden in early 1947. Her father was a German soldier in WWII, who she believed to be dead until they were reunited in 1977. Her mother died of kidney failure in September 1947. This meant that Frida was raised solely by her grandmother.
7. From 1975 to 1977, ABBA was incredibly popular in Australia, and amassed six number one singles. Which stayed at the top for longest?

During 'ABBAmania' in Australia, "Fernando" managed to stay on the top of the charts for an incredible fourteen weeks! Almost as impressively, "Mamma Mia" stood on top for ten weeks, and in fact with a combination of "I Do, I Do, I Do, I Do, I Do", "SOS" and "Mamma Mia", they managed 14 consecutive weeks on top as well! Their last number one was "Money, Money, Money".

Their popularity died down considerably after 1977, but they still managed seven top 20 singles from 1978-1981.
8. What was the last song ABBA recorded?


Answer: The Day Before You Came

Despite "Under Attack" being ABBA's last single released, "The Day Before You Came" was the last to be recorded. The Agnetha-led ballad describes a woman's mundane life the day before she met her lover. Frida's vocal contribution is limited to an operatic line that combines with the chilling instrumentation to make this one of ABBA's darkest songs.
9. ABBA famously won the 1974 Eurovision Song Contest with the song "Waterloo". But beforehand they had also considered another song to enter for Eurovision. What was this song called?

ABBA originally thought that "Waterloo" was too risky. "Hasta Mańana", a sentimental ballad, was more in line with previous Eurovision winners, so they felt that it might have a better chance. They eventually decided on "Waterloo" because it saw Agnetha and Frida sharing lead vocals ("Hasta Mańana" was led by Agnetha), and therefore saw this as a better representation of the group as a whole.
10. In what year was ABBA's infamous logo (with the first 'B' inverted) introduced?

The first single to feature this logo was "Dancing Queen", and the first album to do so was "Arrival". Previous albums have since been re-mastered and reissued with the new logo.
11. There has been at least one ABBA song which features just one vocalist.

In almost every ABBA song, Agnetha and Frida either share lead vocals, or have one of them be lead and the other provide backing vocals. The exception is "Like an Angel Passing Through My Room", a chilling song exploring loneliness and isolation, which is sung solely by Frida. Interestingly, it also features Benny as the sole instrumentalist.
12. One reason ABBA didn't do more than two major tours was because one of the members was afraid of flying. Which one?

The two main tours were across Europe and Australia in 1977, and a tour across North America, Europe and Japan from 1979 to 1980. They did various day trips and TV appearances though. As well as Agnetha's fear of flying, she and Björn also had two young children to look after, and they didn't want to be away from them for too long at a time.
13. What was the last single where Stig Anderson contributed to the lyrics?


Answer: The Name of the Game

In ABBA's early days, Stig helped with the lyrics a lot. But as time went on and the group became more experienced, Björn increasingly worked by himself on lyrics, and Stig eventually became too busy to help them anyway due to his promotion.
14. When "I Do, I Do, I Do, I Do, I Do" was released, it was a top 20 hit in almost every country, with one notable exception. Which country?

Despite hitting number one in Australia and New Zealand, hitting the top ten in most other countries, and even reaching number 15 in the United States, the single stalled at number 38 in the United Kingdom. This was quite worrying for ABBA, as they had failed to have a big hit in the UK since Waterloo, and faced the prospect of being just another Eurovision one-hit wonder. "SOS" reaching number six dispelled these fears.
15. "Waterloo" was the first ABBA single released in the UK.

Actually, the first ABBA single released there was "Ring Ring", though this was while they were still called "Björn and Benny; Agnetha and Anni-Frid". It failed to chart.
16. Which ABBA album was banned in the Soviet Union?

There are two theories regarding why it was banned. The title track describes the fear and mistreatment of political dissidents in the USSR at the time, though the ban may have been prompted by the band's appearance on the television special "Let Poland Be Poland", which was a protest against martial law which had been imposed there at the time.
17. In most countries, ABBA's first compilation album was called "Greatest Hits". However, Australia and New Zealand received a different compilation album. What was it called?


Answer: The Best of ABBA

When released in November 1975, it did amazingly well chart-wise. It spent 16 weeks at number one in Australia, and 18 weeks at number one in New Zealand! In fact, throughout 1976, between "The Best of ABBA", "ABBA" and "Arrival", the band managed to stay at number one on the Australian albums chart for 29 weeks in total!
18. At least one non-compilation ABBA album has been certified Platinum in the United States.

In fact, at least three of them have! Those three are "Arrival", "ABBA - The Album" and "Voulez-Vous". Their peak positions were numbers 20, 14 and 19 respectively.
19. How many instrumentals have ABBA recorded and officially released?

Here are their birthdates: 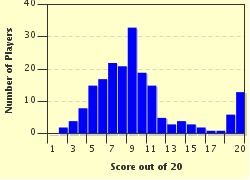 
Other Destinations
Explore Other Quizzes by MntT77