Hello! This is an ABBA lyrics quiz..I give the lyric, you name the song. Good Luck!

Quiz Answer Key and Fun Facts
1. "Schoolbag in hand, she leaves home in the early morning..."?


Answer: "Slipping Through My Fingers"

Bjorn's inspiration for this song came from watching his own daughter, Linda, in her early school years. The song is track 8 on "The Visitors."
2. "And I'm watching the late show in my flat all alone."

"Gimme Gimme Gimme" is one of ABBA's hits covered by the A*Teens on their CD "The ABBA Generation".
3. "So stay on the ground, girl, you'd better not get too high"?

"Honey Honey" is track seven on "Waterloo" and "More ABBA Gold".
4. "Part of a success that never ends..Still I'm thinking about you only"?

"Super Trouper" is a term for a spotlight...and ABBA was certainly in the spotlight with the release of this gem.
5. "It's a dream, it's out of reach....scattered driftwood on a beach"?

The "Summer Night City" video features Agnetha and Frida getting down at a nightclub...fabulous!
6. "I only wanted a little love affair...now I can see you are beginning to care."

This song was originally titled "Happy Hawaii" and had the girls on lead rather than Bjorn. It went through some major changes and became a well-loved ABBA classic.
7. "Sitting near the fire place...dying embers warm my face"?

This haunting track featuring Frida on lead vocals is one of the many shining moments on ABBA's final studio album, "The Visitors".
8. "Jeanie, Jeanie on my mind"?


Answer: "Sitting in the Palm Tree"

Bjorn sings the lead in this early ABBA tune from the album "Waterloo".
9. "This park, and these houses...old streets I have walked"?

This song was part of the mini-musical, "The Girl With The Golden Hair".
10. "I could hear someone saying, as though he was praying"?


Answer: "He Is Your Brother"

Olivia Newton-John, John Denver, Rod Stewart, Earth, Wind, and Fire and others joined ABBA in singing "He Is Your Brother" for the 1979 UNICEF concert at the United Nations.
11. "It's a dead-end street, they tie your hands, they tie your feet."

"Elaine" was recorded during the "Super Trouper" sessions, but unfortunately never made it on the album.
12. "Seems to me now that the dreams we had before are all dead, nothing more than confetti on the floor."

"Happy New Year" is a bittersweet slice of ABBA magic, and one of the highlights on "Super Trouper".
13. "Making somebody happy is a question of give and take"?

"Bang-A-Boomerang" is an upbeat track off of "ABBA".
14. "And rattling on the roof I must have heard the sound of rain"?


Answer: "The Day Before you Came"

My favorite ABBA song!
15. "He made a temporary home in my flat, telling innocent lies, blowing dust in my eyes"?

"Just Like That" was recorded for what would have been ABBA's ninth studio album. The group went their separate ways and the album was never completed.
Source: Author Agnetha27 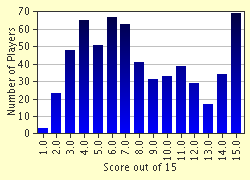 
Other Destinations
Explore Other Quizzes by Agnetha27